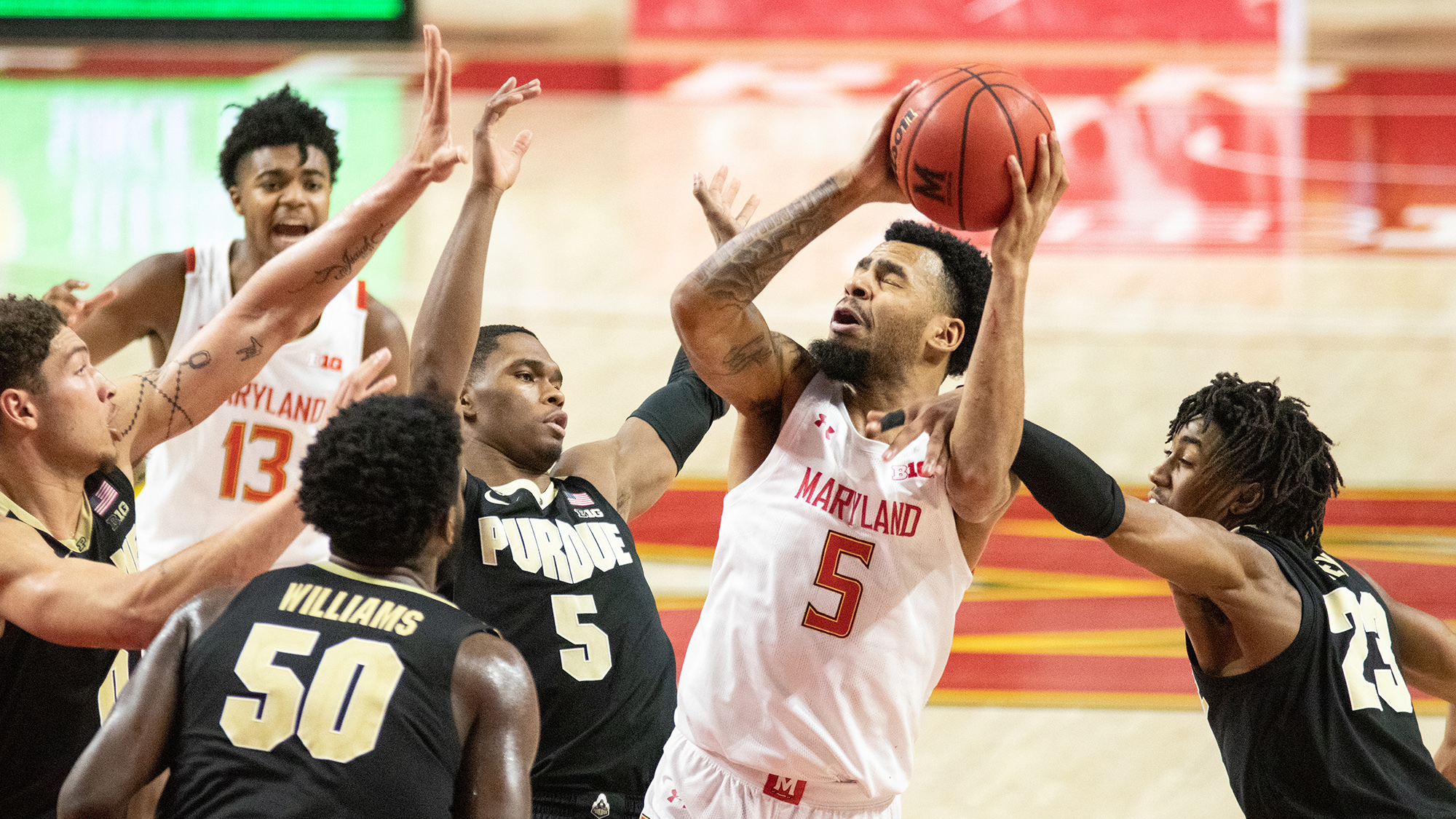 Trevion Williams let out a roar in Eric Ayala’s face. The Purdue forward had just given his squad a seven-point advantage, its largest lead of the contest, with a thunderous dunk over the Maryland men’s basketball guard. The Terps were in an extended scoring drought and needed a break.

They tried crashing the net on the next series but found a wall of Boilermakers. Then, out of the corner of his eye, Darryl Morsell saw Ayala settle into a gap in the Purdue zone at the top of the key. Williams had left his man, and Morsell zipped a pass to Ayala.

The junior countered Williams’ blow with a dagger of his own: a catch-and-release three to give Maryland life. That shot ultimately spurred a 12-4 Terps run to close the contest, including the game-winning free throw from Ayala with 3.3 seconds left to knock off the No. 24 Boilermakers, 61-60.

“There [were] some ups and downs through the game,” Ayala said. “I think we just kept our head up throughout the game and kept playing.”

For Ayala, it was redemption after Wisconsin held him to his lowest output all season — four points — just six days earlier. Those struggles were pivotal in that game — Ayala is a steadying presence for an inconsistent Maryland offense. When his scoring slows down, the Terps are usually in trouble.

Early on Tuesday, it appeared as though his woes would continue. Ayala netted just four points in the opening 20 minutes, while Maryland settled for 24 points on 40.9 percent shooting, including 1-of-12 from three, in the frame.

But he came alive in the second half. Ayala broke the Terps out of their shooting funk from deep, draining a three off a fast break with just over 14 minutes remaining. The next five makes by Maryland were all threes, including an Ayala jumper with 8:30 left to put the Terps in front.

That spurt wouldn’t last. Maryland’s offense slowed to a crawl once more, meaning it had to rely on its defense to keep it in the game.

“All we could do was really make it tough for [them] … and just try to finish every possession with a rebound,” Morsell said.

And then the junior found the ball in his hands with 16 seconds left and his team down one. Williams switched onto him again, so Ayala drove downhill. He hoisted a shot that didn’t fall but followed the miss, snagged the rebound and got fouled on the follow-up.

“We knew they were gonna switch, Eric on Williams, we liked that matchup,” coach Mark Turgeon said. “Eric didn’t settle, got deep and … glad he stepped up and made both of them.”

He sank both free throws, giving Ayala and Maryland its fourth win over a ranked opponent. And that fact will resonate beyond Tuesday night.

The Terps are scrapping for a postseason berth and a win over a likely-tournament-bound Boilermakers squad will go a long way to helping the team return to March Madness.

“We’ve lost some tough ones this year,” Ayala said. “I think it was more about getting a win [tonight], you know, the circumstances have been up against us.”

But on a micro level, it was a get-it-right game. Maryland’s identity has been confusing all season, a smattering of eye-popping performances counteracted by duds. And while Morsell is the Terps’ heart and soul, they haven’t had a true floor general.