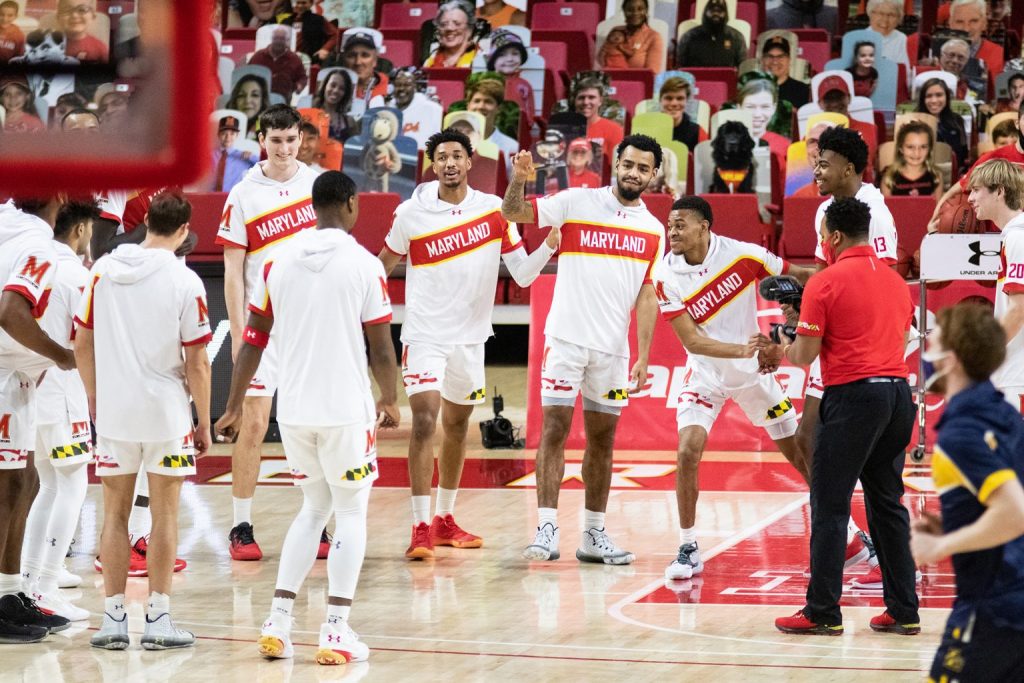 Maryland men’s basketball’s routine before home games is all quite regimented. Players make their way through dribbling drills, shootaround and layup lines, with some type of positional skill training sandwiched in between.

Everything appears orderly. That is, until Waka Flocka Flame’s “Grove St. Party” comes on. The Atlanta-based MC’s hoarse vocals slide over the synth-fueled, 808s-backed beat — save for the occasional inflections of “Flocka!”, “Yeah!” and “Woo!” that litter the track’s just over four-minute runtime.

The Terps are entranced. They bump into one another in delight, each clash drawing more glee out of the youthful bunch.

It’s one of Maryland’s most sacred rituals, a moment that fills the team with energy and excitement before a ball is even tipped.

The Terps have struggled to recreate their on-court success from years past this season. Yet, through traditions such as their “Grove St. Party” dance, Maryland is still finding a way to foster vigor through its squad.

The gesture is quite simple, it seems. The Terps gather together as the beat builds, sensing the weight of the moment approaching. Then, the fleeting period of bliss: players smiling and laughing while crashing into one another.

Freshman guard Marcus Dockery is the life of the party, Wiggins said. He stands at the center of the mosh pit when the song starts, getting a perfect view of the carnage that takes place around him.

Dockery isn’t the only one, though. The moment gives players an opportunity to show off their flair away from the court, a change of pace from the hustle and bustle that has come to define the college game in recent years.

“I know some guys that’ll practice what they want to do,” Wiggins said.

Maryland’s pregame routine has taken on an increased significance in recent months. Amid voiceless stands and cardboard cutouts, the atmosphere at Xfinity Center has been markedly different.

Coach Mark Turgeon’s squad has dropped all four of its home matchups against Big Ten competition. In the three seasons prior, the Terps went 46-7, never losing more than three home games in a year.

It’s been difficult to recreate that energy. Turgeon pushed his players to show more liveliness on the bench back in December. He even mentioned his role players’ muted reactions against then-No. 19 Rutgers on Dec. 14 — a sharp contrast from the frenzied responses emanating from the Scarlet Knights’ bench.

“We’ve made some changes there too,” Turgeon said on Dec. 21. “It’s not gonna determine the outcome, but it’s gonna make things a lot more fun during the course of it.”

Still, no gesture has energized Maryland quite like its pregame jig. Perhaps it’s not the most elegant show of emotion — players jolting into one another, backed by the dulcet tones of Waka Flocka Flame. But it is the rawest. And although this season has proven to be a challenge on and off the floor, the Terps’ pregame routine has been vital to keeping spirits high.

“You have your brothers and your family help you just actually enjoy other parts of life, not just basketball,” forward Donta Scott said. “Getting together and just bumping with that guy knowing that other guy has your back, it just like, [puts] a smile on your face.”