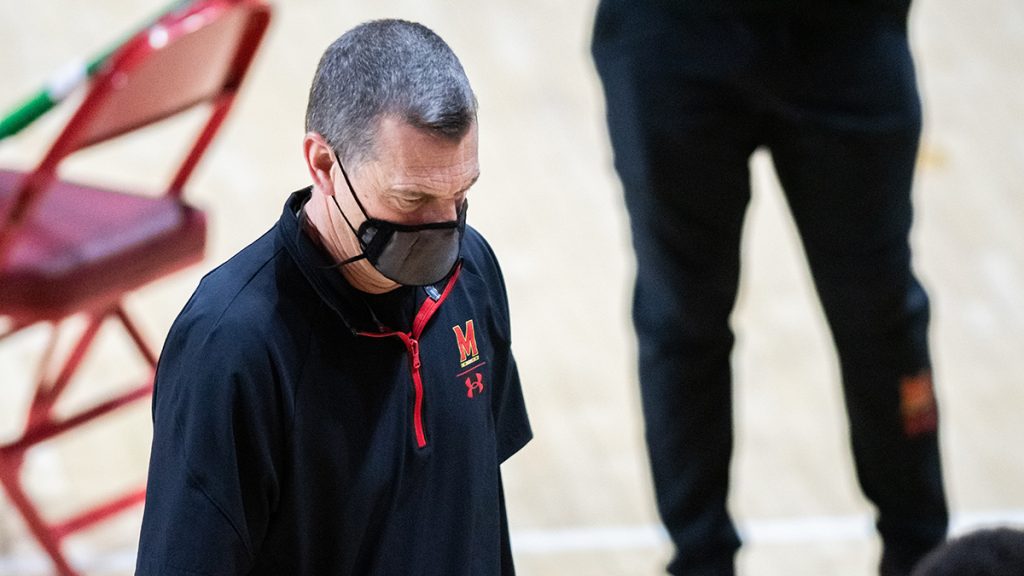 Maryland men's basketball coach Mark Turgeon during the Terps' 61-55 loss to No. 14 Wisconsin on Jan. 27, 2021 at the Xfinity Center. (Julia Nikhinson/The Diamondback)

Maryland men’s basketball had finally closed the gap. After floundering for much of the first half of its game against No. 14 Wisconsin on Wednesday night — the Terps were down by as much as 18 at one point — coach Mark Turgeon’s squad had belatedly found life, cutting the Badgers’ lead to 10 with a little more than eight minutes left.

That’s when Darryl Morsell caught a pass on the wing. He waited a moment, plotting out his next move. Then, he attacked, blowing past Wisconsin guard Brad Davison. He was soon at the rim, poised to throw down a momentous slam and lift Maryland out of its stupor.

But Morsell had different plans. He spun and airmailed a pass directed at forward Donta Scott. As the ball sailed over Scott’s head, Morsell turned away, with another opportunity to cut into the Badgers’ lead falling by the wayside.

Morsell’s giveaway encapsulated so much of what went wrong for the Terps against Wisconsin. Maryland huffed and puffed throughout, relying on a stout defensive display to carry itself through rough patches.

But in the Big Ten, margins are tight. And the Terps, blighted by a steady stream of poor shots and untimely errors, were doomed by their mistakes, falling short of completing the comeback Wednesday night.

“We’re not good enough to be inconsistent,” Turgeon said. “We gotta be really good to win.”

Maryland got off to a torrid start, flailing against a Badgers’ defense that gives up fewer points than any other team in the conference. The Terps hit just two of their first 13 attempts from the field. They were stagnant at times during the opening period, failing to make the off-ball screens and cuts necessary to break down Wisconsin’s man defense.

“We gotta cut harder, we gotta set screens, we can slip screens,” guard Aaron Wiggins said. “It’s a lot of different things we can do when we’re off the ball just to create more space for guys to drive and create for open shots.”

Even when the Badgers’ defense loosened, the misses continued to pile up. The Terps made just seven shots in the first half. Some were tightly contested looks. But many were not. And with Maryland’s open shots clanking throughout, its defense looked that much more vulnerable.

The Terps defensive unit was formidable for large portions of Wednesday’s game. It held Wisconsin to 33.3 percent shooting, and the Badgers did not hit a field goal in the last 7:05 of the final frame.

Toward the end of the first half, though, that unit began to crack. Micah Potter was a nuisance throughout, finishing with 23 points on 8-of-12 shooting. And much of that damage came in the final moments of the first. Potter scored nine straight for the Badgers, including an and-one in which the Badgers’ senior big snatched two offensive rebounds before finishing through contact.

Even as the Terps worked their way back into the game in the second, their mistakes loomed large. Maryland cut Wisconsin’s lead to three with 11:45 left.

But it wouldn’t get any closer. Wiggins gave up a held ball on the next Terps possession. Guard Hakim Hart threw the ball away two plays later. Guard Eric Ayala, normally a sure-handed presence in Maryland’s lineup, got tied up with Badgers’ guard Tyler Wahl 30 seconds after that, resulting in another turnover. And then there was Morsell’s giveaway.

The Terps recorded just nine turnovers Wednesday night. Four came within a three-minute stretch, though, giving Wisconsin the platform it needed to turn its slim three-point edge to a 15-point chasm.

“Just ill-timed stuff,” Turgeon said. “We had nine turnovers but … three or four of them were just at the worst time for us.”

Despite some late-game theatrics, Maryland was unable to respond. Now, sitting at 9-8 — with a 3-7 record in conference play — the Terps are looking ahead, hoping to minimize the unforced errors that doomed them Wednesday night. It’ll be easier said than done.

“It’s hard on all of us. It’s hard on the players and it’s hard on the coaches,” Turgeon said. “It’s not easy. It’s frustrating. We keep talking about the same things … whether it’s a defensive mistake, or a missed open shot, or a bad shot, or a turnover … that makes it tough.”