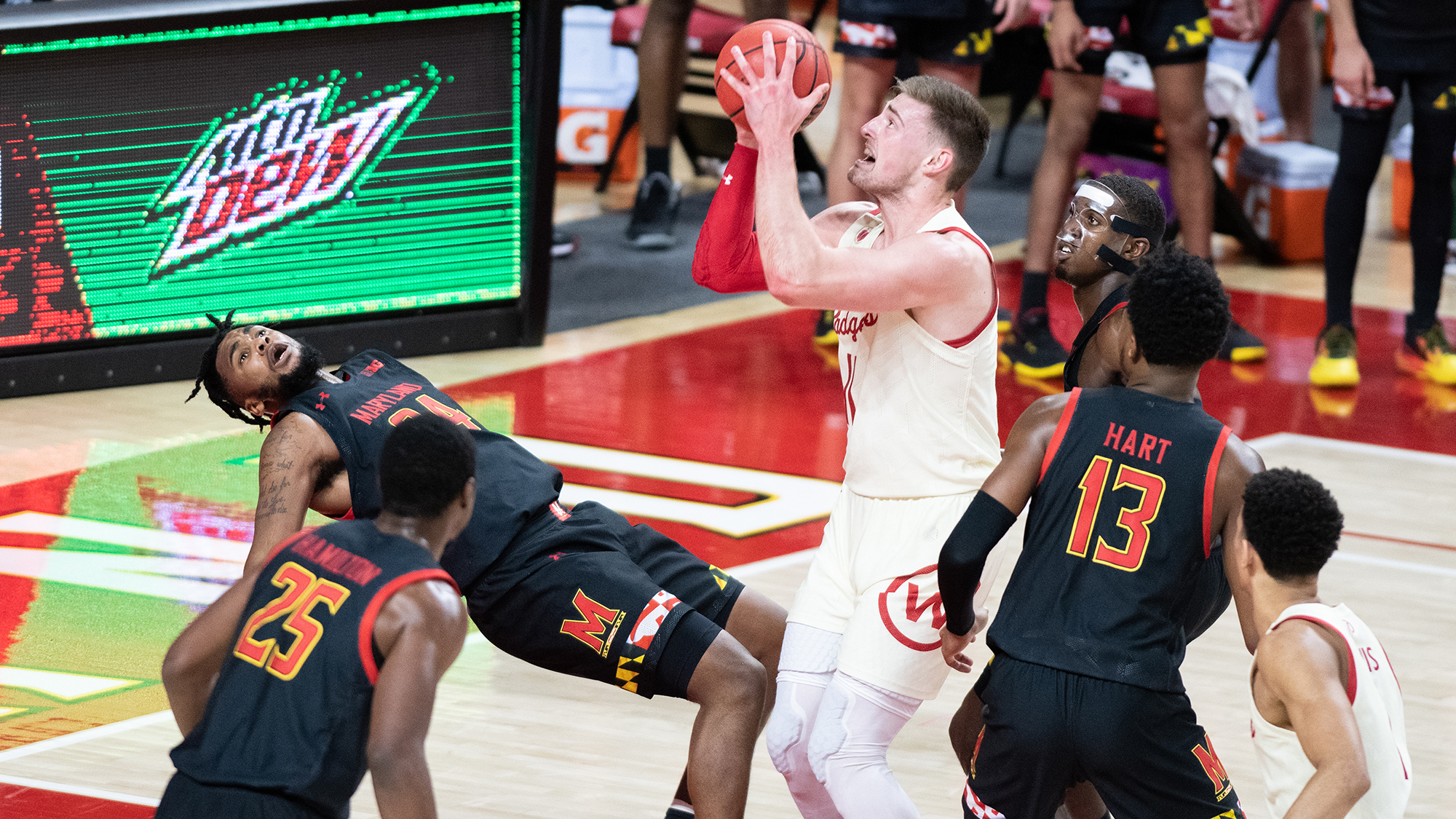 Donta Scott falls down as Micah Potter pulls up for a short-range shot during Maryland's 61-55 loss to No. 14 Wisconsin on Jan. 27, 2021, at the Xfinity Center. (Julia Nikhinson/The Diamondback)

Micah Potter had drifted to this spot a few times, knocking down a pair of triples in the first half.

But that was back when Maryland men’s basketball looked well and truly buried. Now, after a furious Terps rally, Wisconsin’s lead stood at just seven.

Potter was undeterred, though. And with Donta Scott closing out late, Potter drifted again, and launched a jumper from beyond the arc.

It dropped, as it did so many times for Potter Wednesday night. And although Maryland battled to overcome its first half woes, it just couldn’t get past Potter and the No. 14 Badgers, falling 61-55.

“I don’t think we played great,” coach Mark Turgeon said. “We missed open shots and we had a bad three-minute stretch before half and made a couple mistakes defensively in the second half. That’s all they needed with an 18-point lead.”

For much of the first half, Turgeon’s squad sputtered. Scott was a bright spot, notching 10 points.

But the Terps were unable to find their rhythm, clanking shot after shot. They hit just seven of their 28 attempts in the first half as Greg Gard’s defense — the top-ranked defensive unit in the Big Ten — proved its mettle.

“We were kinda stagnant in the first half with the ball,” guard Aaron Wiggins said. “It’s just a matter of moving the ball a little bit faster and moving with a purpose.”

Wisconsin took advantage, overcoming a slow start of its own to push itself out in front. Much of the Badgers’ offense came from Potter, an inside-outside threat who proved difficult to track.

He showed as much with Wisconsin up 11 with just under three minutes remaining in the opening half. Potter ripped through Maryland’s interior, snatching the ball out of the air, swinging past guard Eric Ayala and finishing with aggression. Ayala swiped late, fouling Potter in the process. He made the free throw.

Nearly a minute later, Potter was at it again. He leapt in the air to recover an errant D’Mitrik Trice jumper. With a wave of undersized defenders approaching, Potter flicked the ball toward the rim, dropping once more. The Terps’ deficit sat at 14. It would soon grow, largely through the play of Potter.

Meanwhile, Maryland was poor, trodding through the first half without any real tempo or creativity. And when guard Tyler Wahl rose above the Terps’ defense and knocked down a buzzer-beating runner, it seemed the game was destined to stray into chaos for Maryland — another dismal home showing against ranked competition.

“When we made a mistake, they made us pay,” Turgeon said. “That’s what good teams do.”

But halftime offered respite. Respite soon turned to hope. And come the start of the second, it was the Terps on top. Wiggins netted from three. Hakim Hart followed that up with a three of his own.

Then, Darryl Morsell found life. The senior guard crept to the rack unopposed before forcing home a two-handed jam. Moments later, he slotted from beyond the arc, cutting Wisconsin’s seemingly insurmountable lead to just nine.

That’s when Wiggins took the reins of the offense. The junior guard has been a real fixture in Maryland’s lineups over the past few weeks, making strides as both a playmaker and defender.

But on Wednesday, he got back to basics. It started with a bang: Wiggins faced up his defender before stepping back and splashing a triple. The next possession down, Wiggins was fouled on a drive to the rack. He hit both free throws.

“It was just a matter of spacing and ball movement,” Wiggins said. “I think … we were moving the ball a lot better. I think a lot of us had open shots, especially at the start of the second half.”

Nearly a minute later, Wiggins delivered again, cashing a jumper inside the arc. Turgeon’s squad was within three. And Maryland’s bench, held quiet for much of the first half, was finally bursting with energy.

But as soon as the Terps clawed their way back into the game, the previously dormant Badgers offense found life. Potter scored six straight, and a three-point Wisconsin lead swelled to 10 in just two minutes. After an errant pass from Morsell, the Badgers tacked on another bucket, extending its advantage to 12 with seven minutes to play.

“Our guys gotta be locked in for 40 on the defensive plan and we weren’t there,” Turgeon said.

It got worse for Maryland after the under-8 timeout. Potter rolled off a screen, creating just enough space for a catch-and-shoot three. Suddenly, Wisconsin led by 15.

The Badgers would stay in front. Though the Terps cut into Wisconsin’s advantage, Turgeon’s squad couldn’t quite do enough. A Hakim Hart corner three pinged around the rim before falling into Badger hands. A Scott jumper clanked. An Ayala layup was sent into the empty stands.

And by the time Wiggins missed a triple from well beyond the line, Maryland’s loss was sealed.

Still, Maryland showed fight. After a putrid first half — one that seemed to have them buried — the Terps clawed their way back. But, when it needed a clear leader to take them all the way, to seal an unlikely win, Maryland tossed the ball around in dismay, clanking contested shots.

Porter, however, made the tough ones — finishing with 23 points and leaving the Terps rueing their missed opportunities.

“It’s always frustrating when you’re doing the right things and then [you] just can’t capitalize on the other end,” Scott said. “We gotta start the game off like how we came out the second half. Once we do that, then we know that we got something going.”