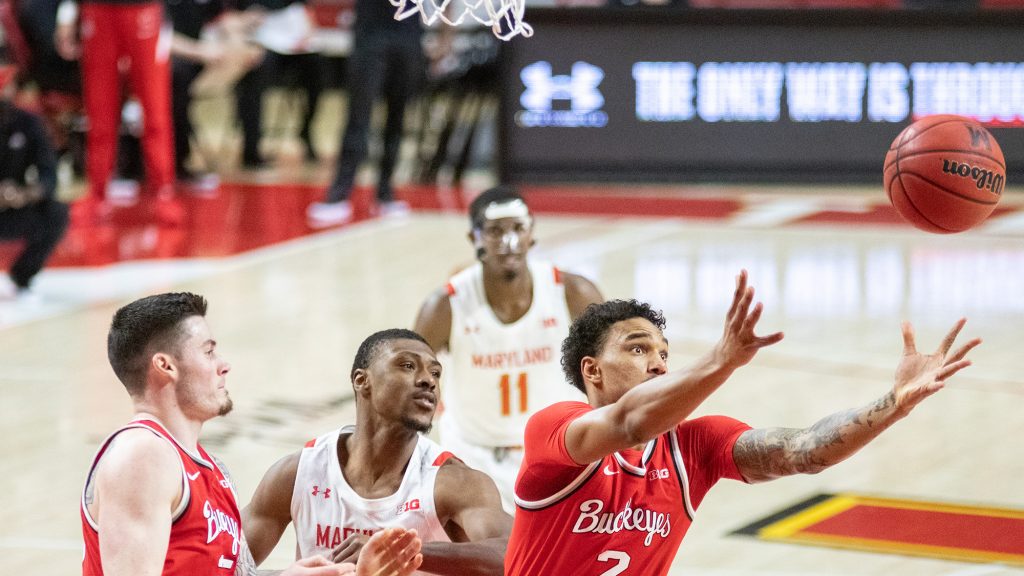 Kyle Young hesitated. The Ohio State forward found himself all alone beyond the arc, anticipating a closeout from a Maryland men’s basketball defender — but it didn’t come.

The Terps had just turned the ball over and were languishing up the court in transition, unable to properly set up their defense. So Young took advantage of the space, stroking a three so easy it could have been mistaken for a practice shot.

It was one of many similar sequences for coach Mark Turgeon’s squad during Monday’s loss to No. 4 Ohio State. Maryland’s offensive struggles frequently turned into points on the other end as the Buckeyes sprinted up the floor and left the Terps scrambling to get in position.

“They shoot it quick,” guard Eric Ayala said. “Just [need to be] more aware and alert on the defensive end.”

That was evident in the opening moments of the contest, as three consecutive threes — two from Duane Washington Jr. — erased Maryland’s 13-5 lead in under a minute. Justin Ahrens and Washington terrorized the Terps from deep, accounting for six of Ohio State’s 10 threes of the night.

Later in the frame, Washington, Ahrens and CJ Walker found themselves running down the court with plenty of space, cashing from long range off open misses by Maryland. Turgeon attributed those defensive lapses to missed assignments, which ultimately proved costly.

“We played hard, but we didn’t play smart in the first half defensively,” he said. “Sometimes it’s hard. You’re gonna give up a shot because their low post is so good … but there was I think three or four that we gave up that we probably shouldn’t have gave up.”

The continued trend of extended scoring droughts did not help the Terps’ miscues on the defensive end. Maryland has been able to hang with most teams thanks to its defensive intensity, masking some of the offensive ineptitude. In previous weeks, the team has stayed in games and survived six-plus-minute runs without field goals by locking down in its end. It held its four prior opponents to no more than 61 points.

But defensive breakdowns allowed the Buckeyes to distance themselves from the Terps. In one critical stretch, Maryland recorded just one field goal in more than 13 minutes across the end of the first half and the beginning of the second. Meanwhile, Ohio State piled on 27 points and turned a six-point deficit into a 14-point advantage.

“We go through those lulls, that’s just who we are,” Turgeon said. “We didn’t guard during that stretch the way we needed to guard.”

The defense disappeared for long stretches on Monday, exposing the Terps’ struggles to drive and penchant for missing open shots. Ohio State exploited that, posting a roadmap for other teams to take advantage of when Maryland’s pressure falters.

And Turgeon’s squad knows it needs to clean up those blunders if it wants to return to the win column.

“We gotta be better defensively guarding. That’s what keeps us in games,” Wiggins said. “It’s just the little things we got to work on.”