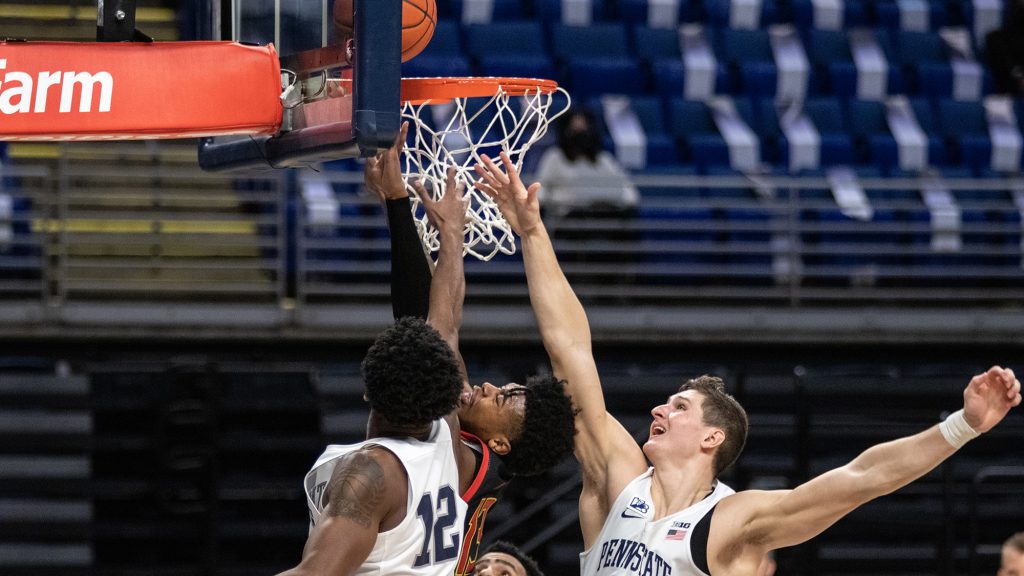 All Maryland men’s basketball needed was one measly basket to break out of its daze against Penn State. The Terps knew their defense would be there; it’s been their saving grace of sorts in recent weeks.

But the basket never came.

And as Maryland drifted off the Bryce Jordan Center court Friday night, it was left rueing its miscues. Costly turnovers, clanked open shots, needless fouls — they all came to the forefront in the game’s final moments, dooming coach Mark Turgeon’s squad to yet another disappointing defeat.

“We just need to make a couple and it’s a different game,” Turgeon said. “If we could have made those couple back-to-back … it would have changed the game. But we didn’t make them.”

The second half started optimistically enough. Guard Eric Ayala cashed a three and hit a pair of free throws early on, continuing to pace the Terps after scoring 10 points in the first.

Still, the Terps’ lineup was noticeably languid. Possessions were long and drawn out, with the Nittany Lions’ defense proving difficult to break down. Maryland recorded a season-low six assists Friday. And with playmakers such as Ayala and guard Aaron Wiggins struggling to find space to create for others, the Terps’ offense stalled.

“I think their defense is really good, and their pressure bothered us,” Turgeon said. “We’re drawing plays up in the sand … just trying to figure out ways to get shots, get the ball where we can get it.”

More often than not, the ball ended up in Ayala’s hands. The junior guard matched his career high with 23 points, the lone spark in a sea of Maryland dreariness. Soon enough, though, that option was cut off.

Ayala scooped a layup off the glass with 7:32 left to cut Penn State’s advantage to one. Then, the drought started.

Turgeon’s squad missed 10 straight shots, unable to break through and push themselves out in front.

Many of those misses were on open looks. Lightly contested threes from Ayala and Wiggins sailed wide of the mark. Hakim Hart put too little lift on his jump, leaving a layup on the fastbreak short. It fell harmlessly into the hands of a Penn State defender, another opportunity spurned.

“We made the right plays on those plays,” guard Darryl Morsell said. “We just didn’t execute.”

Hart fumbled a pass on the ensuing possession, giving Turgeon’s squad a five-point mountain to climb with just under two minutes left. It was one of 16 turnovers Maryland committed that night.

“We turned the ball over too much throughout the entire game,” Morsell said. “We just wasn’t executing. Guards supposed to fight to get open for the bigs, make stuff easier.”

And while Penn State went through a dry spell of its own in the game’s final minutes, seeing shot after shot careen off the iron took a toll on the defensive end for the Terps. Closeouts became more rushed, rebounds more valuable. Their discipline was slipping.

After committing just two fouls in the first half, Maryland racked up 14 in the second. The Nittany Lions made the Terps pay, hitting 16 of its 18 free throws to distance themselves.

All this amounted to a five-point edge that seemed insurmountable in the game’s final moments. Maryland shot 30.8 percent from the field and 11.1 percent from the three-point line, closing off any route for a comeback.

It was a lackluster result in a season increasingly filled with them for Maryland. And as ther Terps’ offensive woes continue to rear their ugly heads from game to game, only time will tell if they can figure them out and solidify their status as a tournament team.

“We are who we are, and we’ve gotten better and our ceiling’s still up there. We can still get better,” Turgeon said. “That’s what we gotta keep trying to do as coaches.”