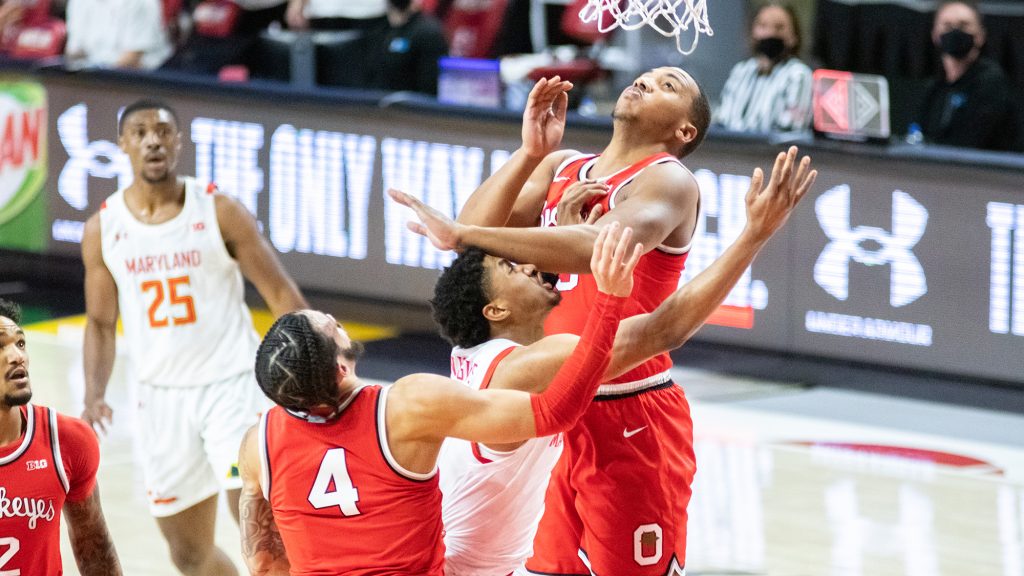 Maryland men’s basketball was caught in transition. Coming off a free throw from Aaron Wiggins, Ohio State’s Duane Washington and Musa Jallow sprinted ahead of the Terps’ defense. And the two Buckeyes delivered in style.

Washington found the streaking Jallow soaring through the air, the latter throwing down a thunderous dunk that got the Ohio State bench jumping and hollering. And over on the Maryland side, the Terps stewed with frustration.

Jallow’s slam encapsulated Maryland’s inability to respond Monday night. The Terps routinely went on extended scoring droughts, and when Maryland made a bucket, the Buckeyes responded emphatically. It all resulted in a 73-65 loss for the Terps to the fourth-ranked team in the country.

“Offensively, all teams have lulls,” coach Mark Turgeon said. “We can play 40 minutes of defense [to mitigate it], and we didn’t do that tonight.”

Wiggins provided that spark out of the under-16 timeout. The “microwave” only found twine once against the Nittany Lions, but fought to the hoop for eight points in the opening 20 minutes against the Buckeyes. He finished with a team-high 17 points on the evening.

One of Wiggins’ layups pushed the Terps’ advantage to eight points, the team looking to make a statement against another highly-ranked opponent. But it took less than a minute for Ohio State (16-4, 10-4) to turn that deficit around, Washington pulling up twice from deep and Seth Towns jabbing his defender for a three.

That was a common refrain in the first half, Maryland pulling ahead only to see its lead almost instantly shrink amid a rain of Buckeyes threes. And after a Donta Scott layup pushed the Terps’ advantage to six with 6:25 remaining, Ohio State stepped on the gas pedal.

Washington, Justin Ahrens and CJ Walker each struck from long-range to send the Buckeyes in front. It was part of a 10-of-26 day from deep for coach Chris Holtmann’s squad, spearheaded by Washington’s three first-half triples — accounting for nine of his 18 points.

“The … key of the game was don’t let [Washington] and [Ahrens] get open looks. We gave them a lot of open looks in the first half,” Turgeon said. “You can’t make mistakes like that against really good teams.”

And the drought continued for Maryland to begin the second. Two open three-point attempts from Jairus Hamilton bounced harmlessly into the arms of waiting defenders as the Buckeyes pushed their advantage to 14.

Possession after possession stalled out for the Terps until Scott delivered the breakthrough bucket, cutting to the lane for a layup with 12:48 to go.

But even as the shots began to fall, Ohio State held its front. Kyle Young drilled a three after a pair of Morsell layups. Then, Young fought for a rebound and put it back following Eric Ayala’s make from deep. Young scored 13 of his 18 points in the second half to tie Washington for the team lead.

And following an and-one from Wiggins, Jallow flew through the air for a two-handed jam, deflating what was left of Maryland’s energy.

“Our offense affected our defense, us not making shots,” Ayala said. “It was like a snowball effect.”

While the Terps mounted a brief response, going on an 8-2 run to cut the deficit to single digits, Walker’s lay-in ended any hopes of a comeback. And E.J. Liddell’s slam sealed Maryland’s fate, with Washington serving yet another inch-perfect lob as the shot clock wound down. The lead was 13, and the Terps looked a deflated side.

Donta Scott hit Maryland’s fifth three of the night in the last minute, but it was to no avail. The Terps had missed shots that needed to be made — and started canning them when it was too late.

Instead, Maryland was left to rue missed shots, contemplate crucial turnovers and watch helplessly as Liddell and Jallow flew and slammed with ease.

“Every little mistake we made, they just took advantage of it,” Wiggins said.