Olivia Weir has impressed for Maryland gymnastics in her freshman season 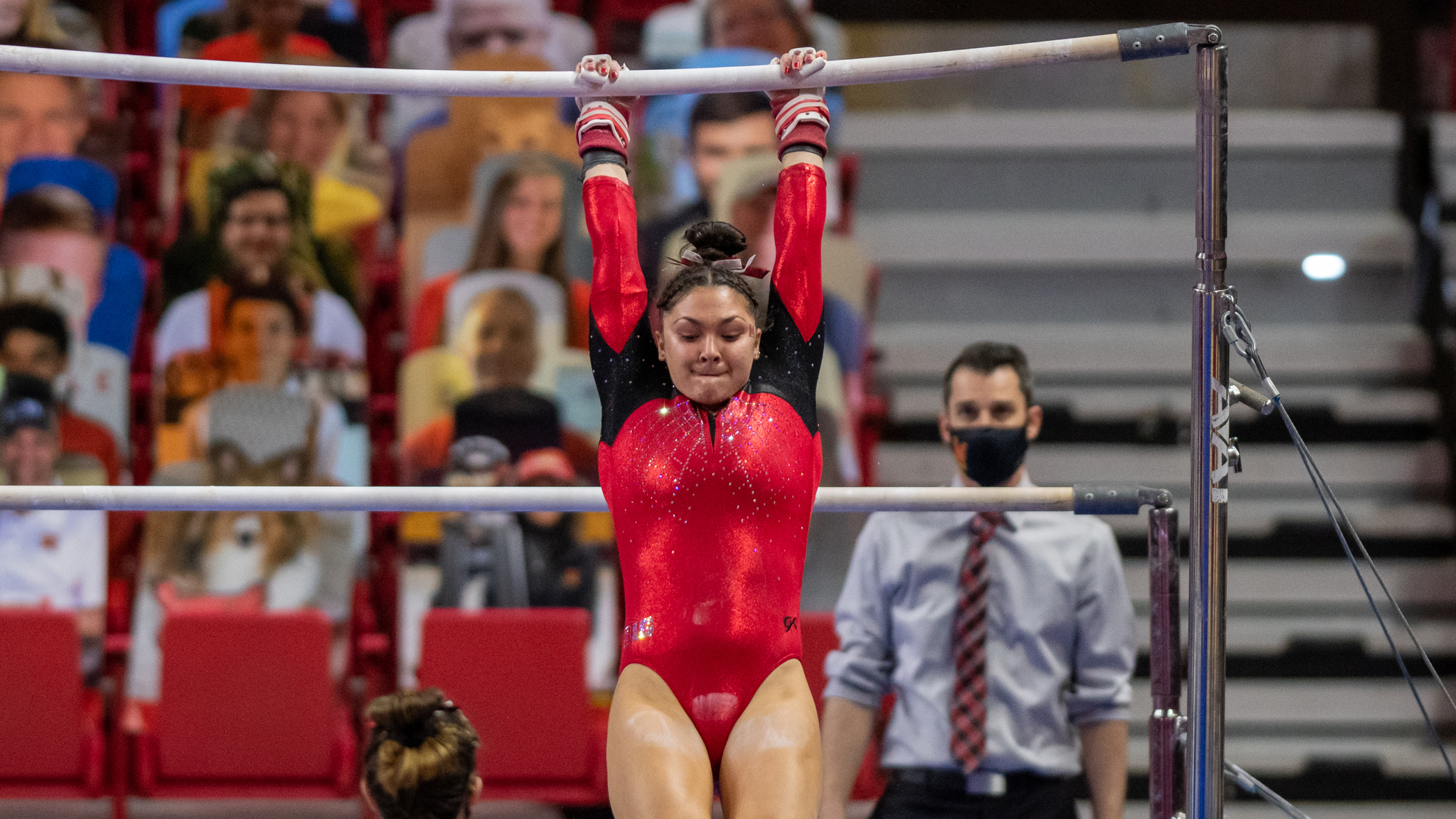 Olivia Weir hangs on the bars as Maryland gymnastics posted a 194.95 against Penn State on Feb. 5, 2021, at the Xfinity Center. (Joe Ryan/The Diamondback)

Freshman Olivia Weir progressed gracefully through her routine on the balance beam in the Maryland gymnastics team’s first home meet of the season on Friday. She whirled through the air with precision, executing her moves with confidence.

A crisp landing earned Weir some all-important approval from her fellow Terps and coaches as they celebrated her dismount. Moments later, the scorecard confirmed their excitement: Weir had earned herself a 9.775, a new season-high and one of the better scores on the apparatus for Maryland.

The Terps went on to post a season-best 48.9 on the apparatus. Weir’s contribution to this feat came as no surprise to her teammates.

“She’s so sharp and so clean, and it’s amazing to see that already from a freshman,” senior Collea Burgess said. “The really close attention to detail, especially being only four meets in in college, it’s really impressive.”

Weir’s development has required a fair share of hard work in and out of the practice gym, however.

Relentless in her pursuit of greatness since arriving at the University of Maryland, Weir refuses to let the difficulties of training and conditioning deter her from this mission. With a well-developed understanding that every minute spent practicing in the gym, grinding in the weight room and nourishing her body outside of practice makes her better, Weir has already impressed coach Brett Nelligan.

“She enjoys, I think, every moment of the journey, and that’s one of the things that benefits her the most,” Nelligan said. “She loves it all: the good, the hard, the challenging, the difficult.”

The time and energy Weir has put into improving her skills has already made an impression on the rest of the members of Maryland gymnastics’ freshman class.

“If she does one skill and it’s not right, she’ll do three more after that just to make sure it’s right,” freshman Tayler Osterhout said. “She will continue to work hard every single day, no matter if she’s having a good day, a bad day… to get to a skill she wants to get to.”

Nelligan’s coaching has aided Weir’s successful transition from the Junior Olympic level to the collegiate level, as she’s learned to focus on one skill at a time. “Slowing down her brain” has already helped her complete some solid routines during the first four weeks of the season.

She’s also relied on the guidance of Burgess and the rest of the seniors, trying to replicate the ways she sees them interact with their other teammates. The confidence and reassurance Weir has received through the help and advice of her older teammates have helped drive the success she has found so far.

By lending an ear to her teammates and offering advice, Weir is already establishing herself as a leader among the rest of the freshman class. Freshman Elizabeth DeBarberie, who has competed at the same gym as Weir since the age of 8, has noticed Weir’s growth as a leader at this level already.

“She just really pushes me to be better than I was yesterday, and to just do my best every day and give it everything I have,” DeBarberie said. “I’m glad we have the opportunity for the next four years to grow together as gymnasts.”

Nelligan expects to continue to see Weir grow not only as a gymnast, but also as a leader throughout her collegiate career. But for now, all the Terps are hoping for is continued improvement for Weir, a gymnast who has already clearly established herself as a part of Maryland’s present — and future.

“Olivia is a natural-born leader. She’s always pushing and finding more ways to get better, more ways to be there for her teammates,” Burgess said. “She is someone who is going to evolve into a super big powerhouse, and I’m super excited to see how she turns out.”