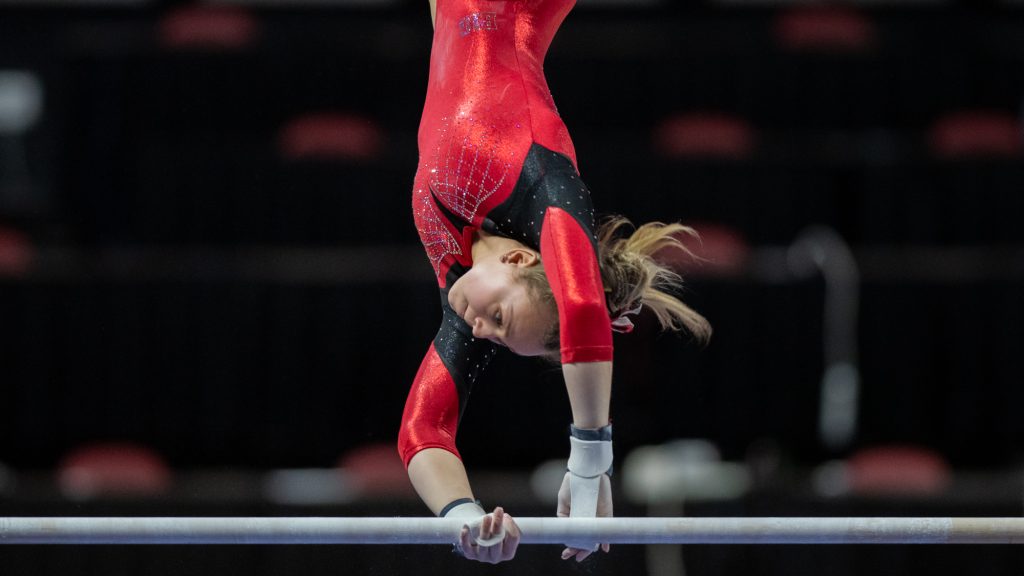 As Emma Silberman approached the uneven bars for a second time Friday evening, everyone in the mostly empty Xfinity Center could hear her teammates loudly cheering from the sideline. A few moments earlier, Silberman had crashed into the mat underneath the apparatus.

Her fall was a crucial error in Maryland gymnastics’ loss to Penn State Friday. The Terps were ineffective on bars throughout, costing them a chance at earning a 195.

Maryland got off to a hot start in its first home meet of the season, with Reese McClure setting the tone on the vault. The sophomore earned a 9.80 in the leadoff spot, and both Silberman and senior Collea Burgess earned season highs.

Sophomore Aleka Tsiknias provided the Terps with their second solid leadoff of the evening, notching a 9.825 on the bars.

But to coach Brett Nelligan’s surprise, the rest of the bars lineup did not look as solid as it did in the practice gym. Sophomore Sophia LeBlanc earned a season-low 9.60, and both Silberman and freshman Olivia Weir suffered falls, dragging the Terps below the 48-point threshold in an event they consider one of their strongest.

Maryland has found stability on vault and floor through its first four meets, and the team earned its highest score on beam yet. But, their struggles on bars are keeping the Terps from reaching the scores they know they’re capable of receiving.

Maryland maintained its momentum from the vault heading into the second half of the meet, and improved on the balance beam as both Weir and Silberman earned season highs.

It looked as if the Terps were on pace for their lowest team score of the season through its first three rotations, but the squad earned its fourth score of 49 or higher on floor in just as many meets, leaving it with a 194.875.

And despite dropping the home-opener to the Nittany Lions and falling to 3-2 for the season, Nelligan remains confident in his squad’s ability to rebound.

“We’re disappointed that we didn’t get the win, but to be honest, we had a blast out there today,” Nelligan said. “As soon as we put it all together, we’re going to be big.”

To help his team remain calm on the bars when it faces No. 10 Iowa Saturday, Nelligan plans to make the apparatus a point of emphasis in practice this week.

“We’ll try to create that competition-day atmosphere and really replicate it as best we can, and then we’ll be ready,” Nelligan said.