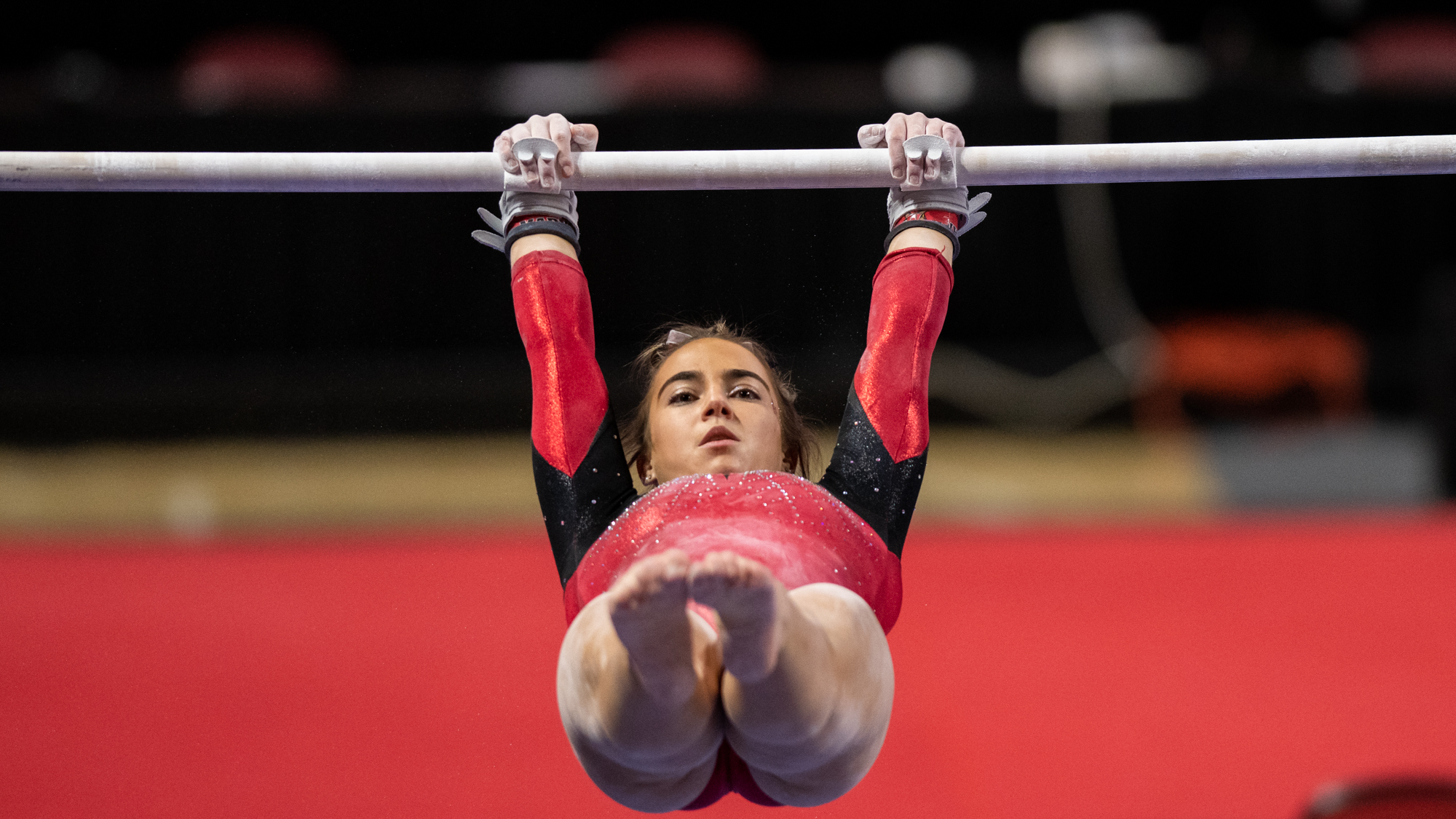 Collea Burgess stormed toward the vault. Moments later, she began to push herself off of the ground, spring off of the table and twist her way through the air in a performance that earned her a 9.85.

This score, one that she has now earned twice this season, tied her career best. And it looked like the Terps would be off to a strong start in the meet.

Despite Maryland’s impressive start to the meet, the Terps could not follow up on their early success during their first home meet of the 2021 season. Maryland failed to reach the 49-point mark in its first three events and finished with its second lowest score of the season, falling 196.00-194.95 to Penn State Friday evening.

The Terps kicked off their home opener at the Xfinity Center in College Park on the vault, where a solid pair of leadoff scores from Reese McClure and Emma Silberman set the tone for the team’s performance on the apparatus.

Despite a low score from freshman Samantha Gilbert, whose hands slipped on the table, the rest of the Terps’ vault lineup closed out the event strongly, led by Burgess’ 9.85. Maryland earned its second highest score of the season in the event with a 48.95.

“We thought it was important to get off to a fast start. I thought our vaults were explosive today,” head coach Brett Nelligan said. “And that really kind of set the tone, gave us some energy heading into rotation two.”

As Maryland began its second rotation on the uneven bars, it looked like head coach Nelligan’s squad would build upon its impressive opening display and cruise to a solid showing in the second frame. Sophomore Aleka Tsiknias led off the lineup with a 9.825 after a confident-looking performance.

But the Terps’ struggles on bars this season would continue. Sophia LeBlanc earned her season-low of a 9.60 and both Silberman and freshman Olivia Weir suffered falls on release moves.

Freshman Elizabeth DeBarberie tied her season-high of 9.725 and Audrey Barber earned a 9.80 on the bars. But these scores were not enough to overcome the major errors that preceded them, as the Terps went on to earn a 47.95, the team’s first score below a 48 on the apparatus this season.

“We don’t miss routines in practice almost ever. So, we’ve got to settle down and just let those practice routines that we hit come through on competition day,” Nelligan said. “We’ll review the video and kind of see where things went wrong and try to correct those.”

Maryland set a new season high on beam during the third rotation, as Burgess provided Maryland another strong leadoff score of 9.775. Weir and Silberman followed up her performance with season highs of 9.775 and 9.80, respectively, but those were not enough to earn Maryland its first team score of 49 in an event on Friday evening, as it fell just short with a 48.90.

Maryland went into its final rotation on floor with a total score of 145.80. Head coach Brett Nelligan’s squad looked to turn its performance around with a strong showing on the apparatus, where it ranked No. 14 in the nation entering Friday’s meet; the team had not scored below a 49 in its three previous meets.

[“It just feels like I’m dancing”: Maryland gymnastics shows its personality through music]

Tsiknias provided the Terps with another dazzling leadoff performance, matching her season-best performance on floor with a 9.800. Her sophomore counterparts in the lineup, Silberman and Reese McClure matched that score, and the Terps were on pace to earn their first 49 of the evening.

“You want to start with a routine that gives the rest of the team confidence,” Nelligan said. “And if you look at our starters… they set the tone that, hey, today’s going to be a good day on this event.”

Maryland’s seniors on the floor lineup held the momentum that their younger teammates had built as the Terps finished the rotation with a 49.15. Maryland ended the meet with its third score of the season below the 195-point mark, despite bookending its performance with strong scores.

The Terps’ continued dominance on floor and steady improvement on the balance beam were not enough to overcome the errors on bars as they watched themselves fall to 3-2 on the season. Maryland will look to overcome its toils on bars, as its scores on the apparatus continue to spiral downward, as it looks to hit its first 196 of the season against Iowa on Feb. 13.

“We’re at the point where we’re hungry, we know we can do it, and we want it. I think Iowa is going to be that pivotal moment for us this season, and I’m really excited for it,” said Burgess.