Students explore the emotions of 2020 in new UMD art exhibition 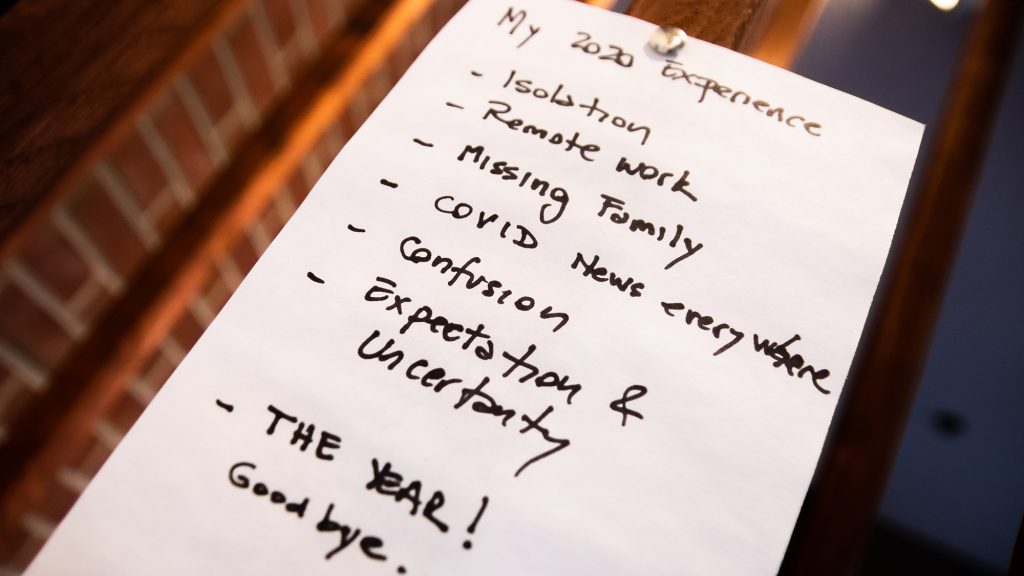 The exhibit asked visitors to write down their 2020 experiences. (Julia Nikhinson/The Diamondback)

“THE END/2020” is a collective reflection on the experience of the past year, expressed through different mediums and perspectives.

Newly installed in the architecture building, the exhibit features artists from this university and beyond, uniting to remember what last year brought them.

Augusto Iglesias, a senior architecture major at the University of Maryland, planned and orchestrated the exhibit — the first one he’s ever organized.

“A lot of design and overall creativity went into it,” he said. “I think those are the things that tie architecture and this exhibit together.”

[Review: The intensely emotional ‘Malcolm & Marie’ is unlike a typical Hollywood film]

Photographer and Montgomery College student Khayla Bulls captured Black Lives Matter protesters using her phone’s camera. She says they’re some of the only photos she’s taken on her phone that she really cares about.

“I was very much in the moment of feeling what everybody was feeling,” Bulls said.

One of her biggest takeaways from 2020, she said, was how many people joined the BLM movement through allyship, which she shows in some of her images in the exhibit’s suppress theme.

For Daniel Merkowitz-Bustos, as a sculptor, he turned to fabrics for his medium in creating a piece, which was his form of demonstration. He wasn’t able to go out and protest over the summer because he needed to stay at home to keep his family safe from the ongoing pandemic.

“Most of my sculpture pre-2020 was made of metal or wood, and that kind of stuff,” the senior computer science and studio art major shared. “But, when I was removed access to the shops at the university, I had to be resourceful and figure out other materials and processes for my sculptures.”

While he wishes more people could view his sculpture in person, he thinks the virtual exhibit was successful.

For artist and Parsons School of Design student Hannah Roberts, her art was derived from spending an extended amount of time alone during the pandemic. Her photography fell under the compress theme.

“It was hard to make art when you’re always alone and doing the same thing every day,” she explained, “but I tried to turn that frustration into the art that I turned in.”

Kyra Johnson, a senior studio art major, painted depictions of her “irrational thoughts” over the year 2020, which were often spurred by the pandemic and all the time she spent alone.

“You just start to learn really quickly that the world is outside of your control, and trying to continue to tighten your grip on it is only going to make things worse,” she said. “Mentally, at least for me, that’s my experience of it.”

In her series of paintings, her work gets progressively less rigid, demonstrating the lesson she learned in letting go.

These are just the experiences of a few of the artists featured in “THE END/2020,” but the exhibit is interactive as well. Viewers are invited to share their 2020 experiences via Instagram by sending the exhibit page a direct message or using the hashtag #theend2020.

Because of restrictions related to the ongoing COVID-19 pandemic, the exhibit isn’t widely accessible to the public for an in-person experience. But these restrictions created a new path for the exhibit to take: A virtual exhibit tour.

Viewers can access the exhibit on its webpage, which also links to the virtual tour and an exhibit video. The exhibit will also be available in the architecture building through the end of the spring 2021 semester.