Review: The intensely emotional ‘Malcolm & Marie’ is unlike a typical Hollywood film 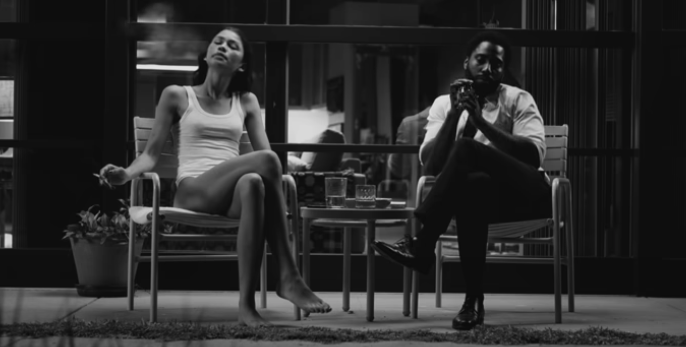 When I first learned director Sam Levinson was producing a full-length film starring Zendaya and John David Washington over the summer, while coronavirus restrictions were still heavily in place, I was intrigued. I knew the film would take place on one set with only two characters carrying the dialogue, but I didn’t know exactly what to expect. I was skeptical but curious to see what these incredible artists would come up with. However, I did not expect the level of intensity and thought that went into Malcolm & Marie.

On the surface, the film is about the relationship qualms between filmmaker Malcolm (John David Washington) and his girlfriend Marie (Zendaya) after they come home from Malcolm’s movie premiere, during which he forgets to thank Marie while giving a speech. The petty argument soon reveals itself to be about their relationship on a deeper level, and the conflict between them due to their complicated personalities and pasts.

The entire film takes place in the house the couple is staying in, but switches between rooms, indoors and the outdoors, with characters changing between few costumes and using different props. Despite the uncluttered, modern setting, the limited variety of film shots and the decision to keep the film black and white, Malcolm & Marie kept me visually engaged throughout.

The two actors breathe life into their characters by exploring their past experiences and current mindsets through dynamic and powerful monologues. Zendaya and Washington perfectly matched each other’s energy during every confrontation or period of isolation within the film. The actors’ reactions to each other were exceptional, making the dialogue appear more real than what I have seen in most films.

From the movie’s beginning, you can tell that Zendaya and Washington’s characters are multilayered and complex: like many real arguments, it’s tough to tell who’s right and who’s wrong. I eventually stopped trying to figure it out, choosing instead to follow their dialogue and see what would happen. Without ever leaving the room, I understood their relationship’s origin and their past struggles, all while the two were engaged in near-constant back-and-forth.

Many issues came up during the hour and 40-minute argument, such as racism in the film industry, mental health, addiction, narcissism and authenticity — however, none of these are even the main focus of the film. I believe the producers wanted the main focus to be the relationship, and they did this exceptionally.

As I sat there, I began to wonder what the film’s cinematography and soundtrack — which included classic songs such as James Brown’s “Down And Out In New York City” — had to do with Malcolm and Marie’s relationship.

Malcolm is egocentric and narcissistic. He projects that onto Marie by putting her down when she expresses why she is upset and concerned about the relationship. Of course, Marie has shortcomings as well. At times, I felt Marie’s words were expressed poorly and her behavior wasn’t as effective as it could be. But every opportunity she gave Malcolm to truly apologize and reflect on her concerns, he turned the argument back on her. Not only that, but he brought up Marie’s past trauma with substance abuse and self-harm in order to invalidate her feelings.

[The best romance movies to hate-watch this February]

This invalidation went so far as to blame Marie’s behavior on psychosis and reminded me of the traditional toxic masculinity associated with the the time period visual elements of the film nodded to. I can’t help but think this was done on purpose.

Despite all of this, the script doesn’t make Malcolm a total villain. Washington made sure to show another side of Malcolm’s character through beautifully delivered monologues about how much he truly loves and cares for Marie. This makes it harder to form an absolute opinion on his character.

At the end of the movie, there is no real reconciliation between the two characters. It is left up to imagination whether their relationship survived the argument.

Although the acting was outstanding and cinematography was as good as it could be with the limited production available, the film was difficult to watch. As someone who has dealt with dialogue similar to Malcolm’s, it was hard not to feel infuriated as Zendaya delivered her strongest monologue of the film, in which her character begged Malcolm to stop making her feel bad for sharing her feelings. And watching the argument unravel for over an hour was a little draining.

Along with the aesthetic appeal, I think part of the film’s beauty was that it was difficult and uncomfortable. It was tough to make any of the clear “hero/villain” distinctions that usually accompany blockbuster films; it felt more like watching a real argument unfold between a seemingly typical couple.

Overall, I think the film offered several important lessons. Cinephiles and casual viewers alike will appreciate the minimalism of the filmography. In terms of character development, Malcolm & Marie is an exceptional lesson to writers and moviegoers on how to capture the numerous angles of a character with little over an hour.

The movie was released on Netflix on Feb. 5. I recommend anyone who is interested in this format of filmmaking or writing to watch the film with close analysis, and put your opinions on each character aside until the very last scene.