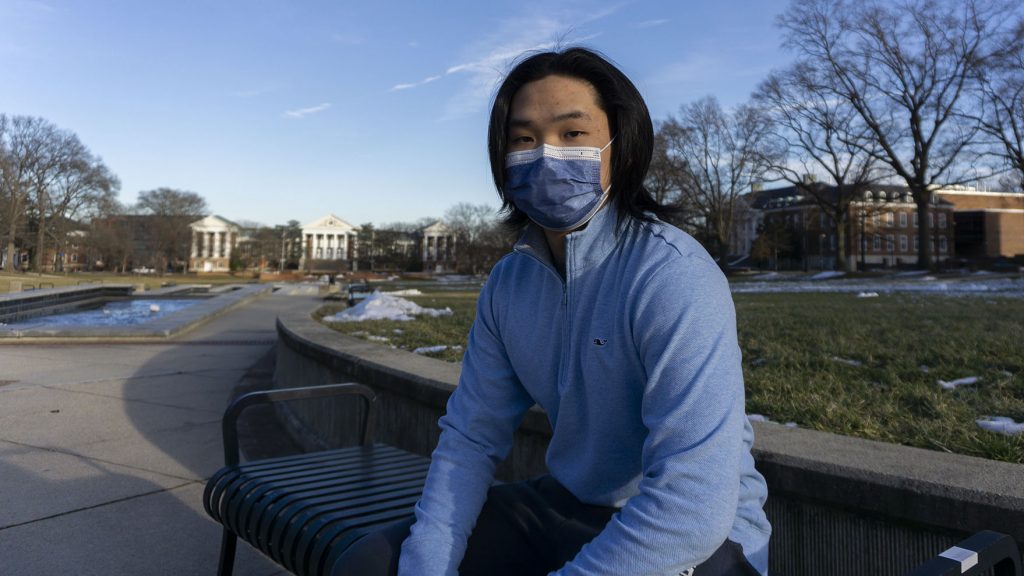 Zeyu Zhong on Feb. 4, 2021. Zhong is living on the campus this semester because he has an in-person lab. (Taneen Momeni/The Diamondback)

Aboli Dahiwadkar knew living on the University of Maryland’s campus for the first time this semester would be challenging.

Classes were going to be online-only for at least the first two weeks, and the university has prohibited in-person eating at dining halls and guests in dorms for the start of the semester. On top of that, many freshmen already lived on the campus last semester, leaving students like Dahiwadkar in a difficult position.

“It’s frustrating knowing that I’m never gonna be able to form the same connections as everyone else did when everyone was new,” the computer science major said. “Everybody was looking for friends at that time. … Now, everyone has their set friend groups.”

Last semester, the university’s dorms were at 41 percent occupancy, according to Andrea Crabb, residential facilities director. This semester, the occupancy is at 45 percent, Crabb wrote in an email, and those new students have had to adapt to an unprecedented environment at the university.

Ryan Flint, a freshman computer science major, said living on the campus was “a little rough at first” and that it “hasn’t been as cool” as he thought it would be. But there are a few other people on his floor new to the campus.

“It’s a little difficult to balance meeting new people with staying COVID-safe,” he said. “But aside from that, it hasn’t been too bad.”

Learning how to live on the campus during the pandemic has also brought new challenges.

Zeyu Zhong is living on the campus this semester because he has an in-person lab. If it hadn’t been for the class, he said, his parents wouldn’t have let him come to the campus because of the coronavirus. Zhong is being “very careful,” he said, taking spray bottles to clean surfaces whenever he goes outside.

“I’m definitely feeling a little more paranoid than everybody else who’s been here,” the freshman bioengineering major said.

Dahiwadkar, who is living in Prince Frederick Hall, was also concerned about contracting the virus, but her fears have since decreased. The dining halls have been safer than she expected, she said, but shared bathrooms have presented COVID-19 concerns.

“When taking a shower or brushing your teeth, you can’t wear a mask, which is the main way that we’ve been taking precautions,” she said.

But now that the semester is almost two weeks complete, the freshmen said they are becoming more comfortable.

Though being around people who lived on the campus last semester can be difficult, Dahiwadkar said it has also been helpful.

“When I don’t know how something works, like if I don’t know how the dining hall works or the bus system works, I know I can ask almost anyone and they’ll be able to help me out,” she said.

And for Raj Ukondwa, coming to the campus hasn’t been as much of an adjustment. He’s living off-campus at The Landmark and he has friends from high school in College Park.

Although living alone in an apartment filled predominantly with upperclassmen is relatively more isolating than a dorm where nobody knows each other, he’s found a silver lining, he said. To him, when people are willing to make the trek to his apartment, it’s a sign of a good friendship.

“I’m able to be proactive and make plans, but obviously it’s about having good friends that are willing to come down to you, and being willing to go places,” he said.