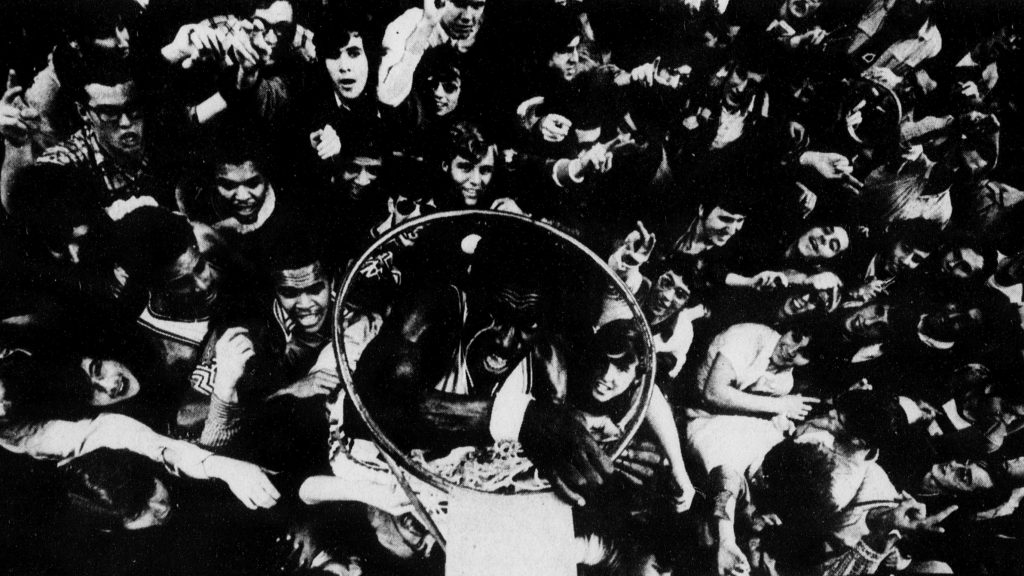 Guard Howard White hangs on the rim after Maryland men's basketball's 31-30 win over No. 2 South Carolina on Jan. 9,1971 at Cole Fieldhouse. (File photo)

Howard White tightly gripped the rim on Jan. 9, 1971, doing everything in his power to stay afloat.

Beneath him, a deluge of students stood in awe. They had rarely seen a night like this in their time at College Park. Maryland men’s basketball had long sat at the floor of the ACC, struggling to compete with perennial powerhouses North Carolina, Duke, North Carolina State and South Carolina.

But, on that brisk January night, things began to change. The Terps outlasted the No. 2 Gamecocks 31-30, securing Lefty Driesell’s first victory against ranked opposition in his Maryland career and thrusting the Terps into the consciousness of a mostly uninterested student body.

“That game got the students interested in coming,” Driesell said. “That was a very important game for us.”

It was a game mired in controversy. Three weeks earlier, the two sides broke out into a brawl in Columbia. Concerns of a repeat ran rampant in the days leading up to the rematch.

Meanwhile, Maryland’s offensive approach — centered on holding onto the ball for as long as possible — was controversial.

For those who were there, though, that game — and the frenzied celebrations it set off — meant more. College Park erupted, a campus community bursting with life after a momentous upset.

And now, 50 years later, the reverberations of that wild night in Cole Field House still ring loud as ever.

[The road to independence: The Diamondback in the Vietnam War era]

For all of his experience, Driesell didn’t see the punch coming. It was Dec. 16, 1970, and the Terps were in trouble. Down big to the Gamecocks, a skirmish between Maryland’s Charlie Blank and South Carolina’s John Ribock broke out underneath Maryland’s basket.

Benches emptied soon enough, as did many of the bleachers in Carolina Coliseum. Amid the flurry of confusion that followed, Ribock busted Driesell’s lip open with a clean right cross.

“After the game, [former South Carolina head coach] Frank McGuire said, ‘Ain’t nobody hit Lefty. He was swinging around and hit himself,’” Driesell recalled with a chuckle.

The game was called shortly thereafter. Despite White’s exploits — the sophomore guard poured in a then-Carolina Coliseum record 38 points — the Gamecocks walked out 26-point victors. However, the stage was set for an emotional rematch in College Park three weeks later.

In the days leading up to the game, the atmosphere on the campus was tense. This campus was already used to crisis by then; months earlier, the Maryland National Guard occupied the campus in response to students’ protests over the Vietnam War.

“We were, in the spring, gassed, tear-gassed with the National Guard,” alumna Kathleen Galinat said. “It was very crazy, and [basketball] was a positive, fun outlet that everybody looked forward to. There was no other sport that had us come together and have so much fun.”

However, it seemed this university was cratering toward another kind of conflict there as well. The athletic department took quick action to quell any potential reprisals, holding talks with several student organizations.

Two days before the game, the department published a full-page ad in The Diamondback imploring students to “accord coach McGuire and his Carolina team the warm welcome, courteous treatment and gracious hospitality which we offer to all guests on our campus.”

South Carolina’s trip went largely as planned. Still, come Jan. 9, the atmosphere in Cole Field House seemed markedly different. With 14,312 spectators in the stands on that frigid evening, it was clear something special was brewing.

“The place was electric,” former assistant coach Joe Harrington said. “This was going to be World War III.”

White stood near half-court, content as he could be. Across him were the Gamecocks and their stout zone defense. They had received strict instructions to not stray too far out into the perimeter.

“As soon as we got the ball, we held it,” Harrington said. “We went to half-court and held the ball.”

That was Maryland’s game plan, Harrington said. South Carolina had one of the nation’s most prolific offenses, fueled by future NBA players Tom Owens and John Roche.

The Terps had caught a glimpse of the Gamecocks’ high-powered attack early that season, struggling to contain the likes of Owens and Roche before the game descended into chaos.

So, Driesell devised a plan: have White and O’Brien keep the ball near half-court. Maryland was using its offense to defend, Driesell said. By keeping the ball out of South Carolina’s hands, the Terps were giving themselves a chance.

“Our game plan was, ‘Look, they’re too good. We can’t play a normal game against these guys,’” Driesell said. “‘We’re not gonna hold the ball, but we’re gonna be very cautious about taking shots.’”

Maryland was cautious, taking precious few shots in the opening frame. But, so were the Gamecocks, staying in their zone throughout. The game had reached a standstill. And for those in attendance, it was clear who had the edge.

“Maryland was just kinda taunting them the whole time with just hanging onto the ball,” said Wayne Galinat, alumnus and Galinat’s husband.

After White hit a buzzer-beater from the baseline, the Terps entered halftime with a 4-3 lead. In total, both teams combined for just four shot attempts.

It wasn’t quite an advertisement for the beauty and grace of the college game. But, the students didn’t care. Maryland was well and truly in it.

The scoring would pick up slightly in the second half. And as the game neared its crescendo, those in the stands made their voices heard, cheering, laughing, shouting — whatever was needed to spur the Terps on.

“It didn’t matter [that] the score was low,” Galinat said. “The anticipation of what’s going to happen, how are they gonna handle this? We weren’t expected to win, so we wanted it.”

Bob Bodell didn’t know when his number was going to be called. But, he knew he had to be ready.

That moment would take some time to materialize, admittedly. But there Bodell was, on the floor with 14 seconds left on the clock and Maryland down 30-27 in overtime.

He had an up-close view when White picked off an errant South Carolina inbounds pass, feeding forward Dick Stobaugh to cut the Gamecocks’ lead to just one.

Now, with eight seconds left, it was Bodell’s time to bask in the glow of the spotlight — if only for a fleeting moment. Bodell deflected Roche’s pass on the inbounds before finding White. The sophomore guard flicked the ball over to O’Brien, who stood at the foul line. The sophomore forward rose and fired as the game clock expired.

It fell through. The Terps had secured the upset. And as students spilled onto the floor, the weight of the victory was apparent to all those involved.

“That was pretty exciting,” Bodell said. “To be part of the comeback that ended up winning the game for us.”

Schlossman scurried down the stairwell, hoping to join the joyous mob that was forming near center court.

And amid the sprawl of students around him, Schlossman felt content. Maryland men’s basketball had given students — and itself — a brief respite from the stress of the outside world.

The rest of the night is a blur, Schlossman admits. Those memories have faded in the 50 years since.

But the joy Schlossman felt in that moment, peering out into the choir of noise that surrounded him, will be hard to shake.
“It’s one of the … high points of my life,” Schlossman said. “It was just such a huge thing.”