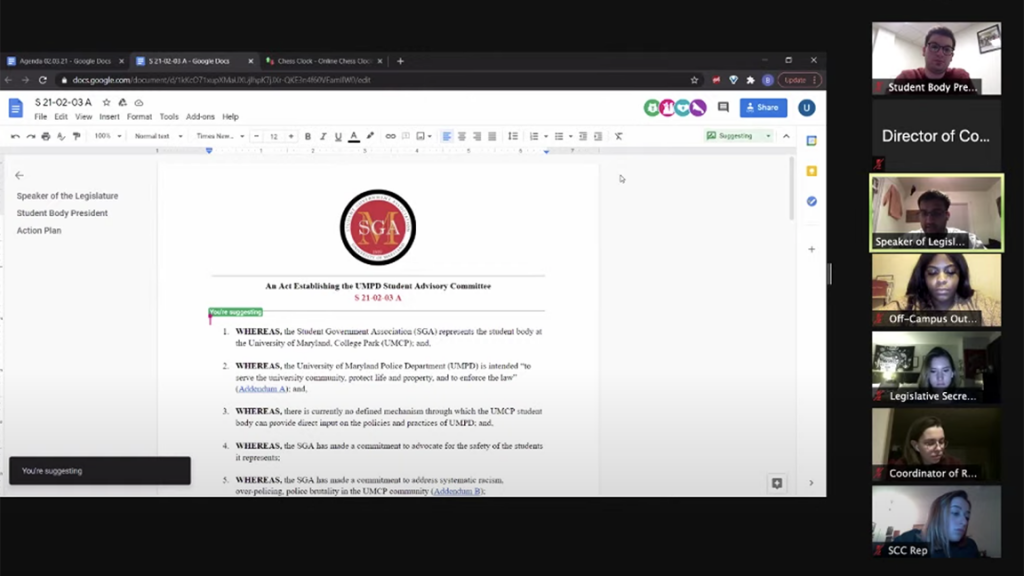 The University of Maryland’s SGA tabled emergency legislation that would establish a committee to meet with the university’s police department at a virtual meeting Wednesday.

The policing bill raises concerns that there is “no defined mechanism” allowing students to provide direct input to the University of Maryland Police Department.

“We have advisory committees for a lot of different aspects of student life … It’s about time that UMPD join that list,” said Josh Steighner, the sponsor of the bill and a computer, mathematical and natural sciences representative.

Before next week’s meeting, the policing bill will undergo more internal review from two Student Government Association committees, which may result in some changes to the already-drafted bill. Although the initial goal was to have the committee meet at the end of February, it’s unclear if tabling the bill will have an impact on the timeline.

Nabila Prasetiawan, SGA vice president, worries the delayed vote may mean the committee has fewer chances to meet over the span of the spring semester, but recognized that an additional week could be beneficial.

The committee is set to meet twice a month and will review and make suggestions about the police department’s policies and programs, according to the bill. The committee’s exact agenda or other issues it may want to tackle will be determined once it is assembled, but it will consist of about 11 members.

The members will come from five different student advocacy groups, including the SGA, the Residence Hall Association, the Graduate Student Government, the University Student Judiciary and the Black Alliance Network. Three seats will be reserved for students outside those organizations, and the SGA plans to send applications to Black, Latino and underrepresented student organizations.

“What we’re hoping for it to be is a collaborative effort of different students on campus … keeping police accountable and proposing changes as they come,” Prasetiawan said.

The inclusion of multiple organizations and openness to the student body will bring students together who share different perspectives, said Josie Shaffer, SGA director of student affairs.

“A lot of people who are in those orgs kind of walk the same circles … I really hope that the at-large seats bring in more unique perspectives than just someone like myself who’s been in SGA for three years,” Shaffer explained.

Conversations about creating an advisory committee began last summer as the Black Lives Matter movement rose to national attention. The SGA administration met to create a loose plan of different initiatives and issues they wanted to tackle during the following legislative session, which included reinstating the committee, Prasetiawan said.

The UMPD Student Advisory Committee began in 2015, but eventually dissolved due to a lack of direction, said Dan Alpert, SGA president.

When talks of reinstating the committee began last year, the SGA spoke to RHA members about collaborating and adding SGA representatives to the RHA’s existing policing related committee. RHA members, however, felt the merge would make the committee’s “scope too large and out of RHA’s hands,” Shaffer said.

On top of RHA’s policing committee, university President Darryll Pines also enlisted students to join a policing task force last summer, but it’s set to disband at the end of this semester, Alpert said during the meeting.

In addition to working with members of the police department to address policing issues, another goal for this committee is to create attainable goals and work on them throughout the semester, Shaffer explained.

“There’s unresolved tension and … talking about it is good, but talking about and having plans on it is even better,” Shaffer said.

After the end of the legislative session, which ends in May, the committee will write an annual report in June to the university’s governing bodies about its work and progress.

Steighner hopes the committee sparks conversation with the police department about why officers are armed when handling all issues on campus.

“UMPD officers have never discharged a weapon at anything that wasn’t roadkill deer … in the last like 20 or so years,” Steighner said. “So the fact that they carry handguns with them everywhere they go is kind of absurd.”