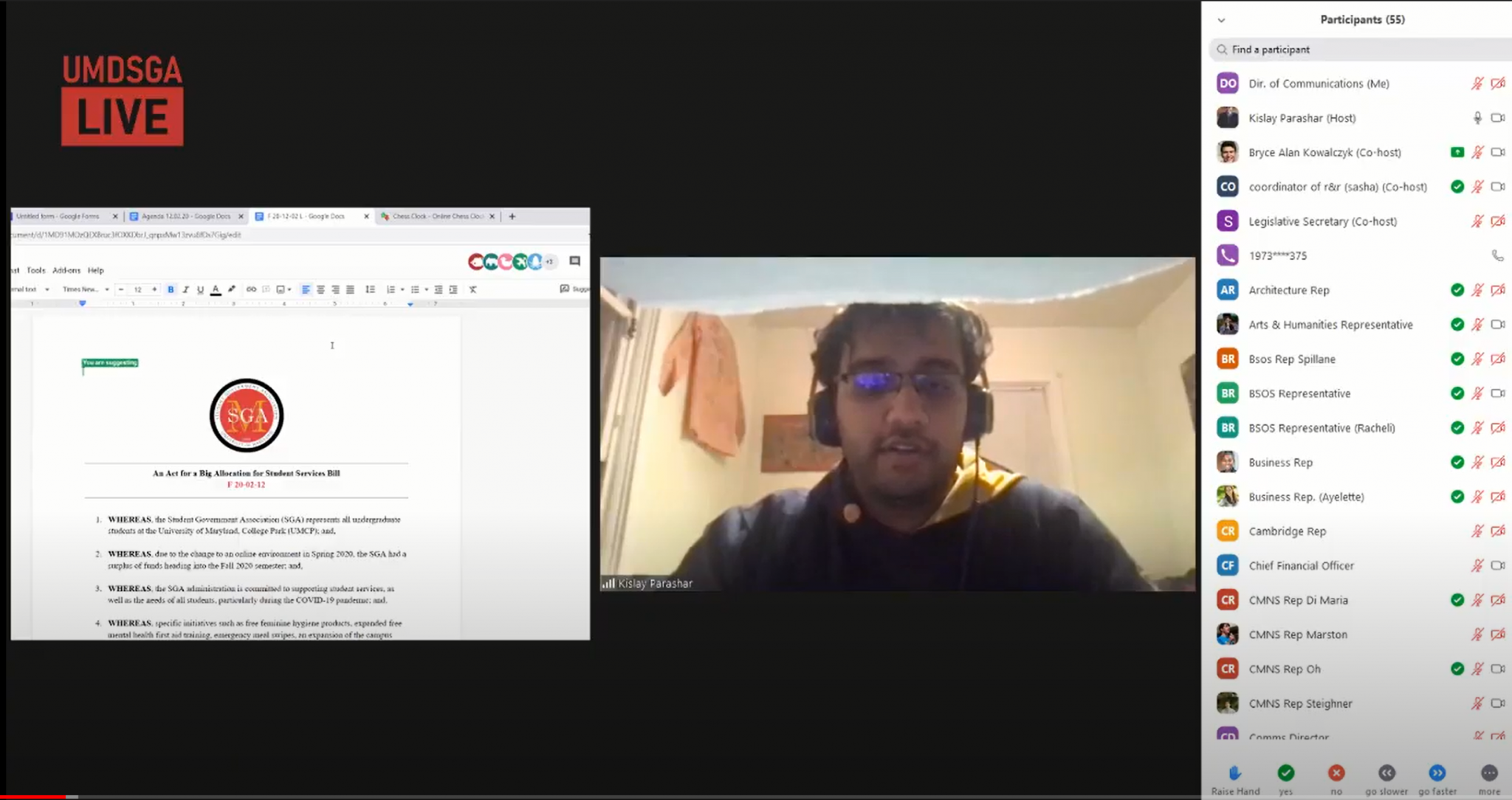 The SGA voted to allocate $400,000 to student services on Wednesday. (Lyna Bentahar/The Diamondback)

The University of Maryland’s SGA voted to allocate more than $400,000 to support student services Wednesday night, including $300,000 specifically allocated to the Student Crisis Fund.

In a typical year, student activity fees would be allocated to student organizations, leaving the Student Government Association’s finance committee to make decisions according to need and how much money it has to allocate. Because most of that money normally goes to things such as travel expenses and in-person events, the current coronavirus pandemic has left the SGA with a surplus.

“It’s a really, really exciting thing. This is something the SGA should be really proud about,” said Dan Alpert, the body’s president. “Not many student governments across the country have the ability to allocate over $400,000 to benefit students — not only this year, but setting the foundation for future years.”

Alpert especially pointed to the funding for the Student Crisis Fund as an important achievement, citing the fund’s role in supporting students financially during the pandemic. The crisis fund has awarded over $1.3 million to 2,500 students this year, but is still in need of funds, Ed Kenny, director of development and external relations for student affairs, said.

While the fund is able to raise money, they’re still unable to keep up with the demand from students, Kenny told the SGA.

There are currently 71 students sitting on a waitlist for the crisis fund, but many more have made requests, amounting to at least $55,000 in need, Kenny said.

Under state law, the SGA isn’t allowed to allocate money toward charities. After consultation with the university’s compliance office, however, proponents of the bill were willing to accept the small risk of being audited by the state and make the transfer anyway. The SGA last transferred $65,000 to the crisis fund in April.

The bill also allocated $48,000 in funds to create a three-year pilot program installing free period products in 25 bathrooms on the campus, a win for advocates of the project, including the Student Facilities Fund and the student coalition Get Ovary It.

The project was originally proposed to the university’s Facilities Council, but Provost Mary Ann Rankin, who oversees the council, had questioned whether funding for the hygiene products should be a priority for facilities.

The original proposal was to serve 15 bathrooms for one year, but Alpert said increasing the number of bathrooms would also increase the amount of data to show to the university that investing in more period products benefits the student body.

“This has been an SGA initiative long before I was in college,” said Josie Shaffer, chair of the Student Facilities Fund and a junior government and politics major. “We had the chance to do something really special — this is going to happen for the next three years. I’m not even going to be here in three years and it’s exciting to see a legacy of some sort.”

Other funding includes $10,000 allocated to training 345 students to perform mental health first aid and over $47,000 to supplying the campus pantry’s culinary training center. The body also allocated $5,000 to Dining Services’ emergency meal swipe program. The SGA continues to hold a surplus, hoping to allocate the money next semester.