30 years later, ‘Coming to America’ remains one of Eddie Murphy’s most memorable films 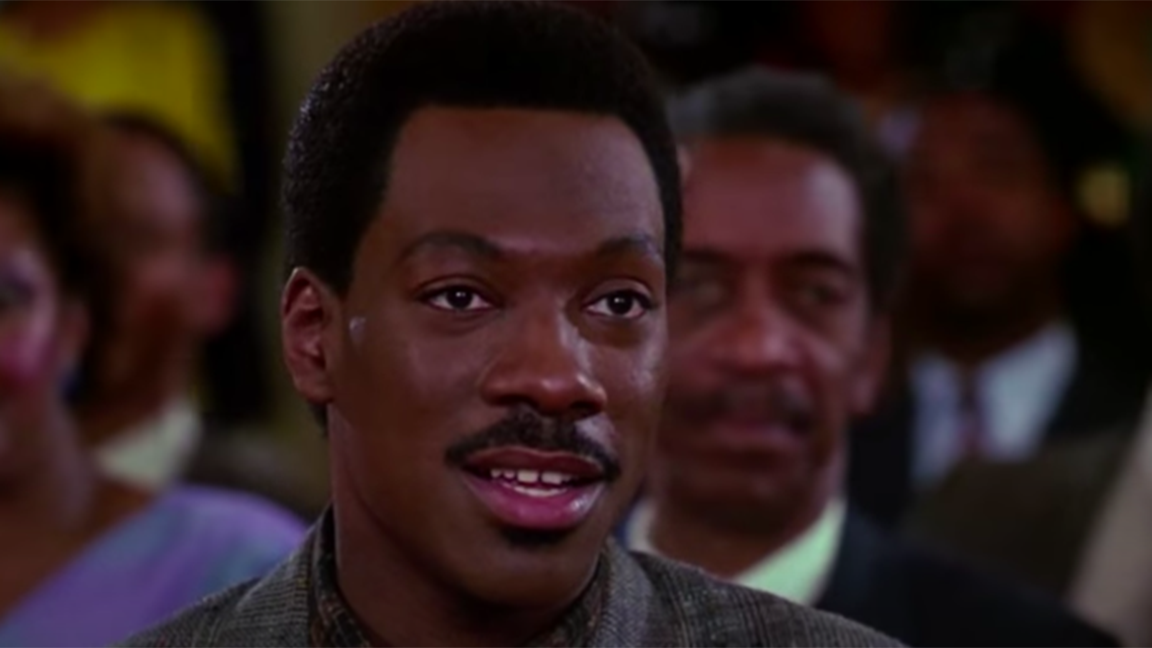 The original 'Coming to America' was released in 1988. (Screenshot via YouTube)

Coming to America was added to Amazon Prime Video on Monday, in anticipation of its sequel Coming 2 America, launching March 5 on the same service.

The 1988 movie was written in part by Eddie Murphy, who starred in multiple roles alongside Arsenio Hall. Murphy plays Akeem Joffer, an African prince from the fictional country of Zamunda, who lived a pampered life every day until his 21st birthday. Then, before getting forced into an arranged marriage, he travels undercover to Queens, New York City, as a foreign student. Alongside trusted companion Semmi, played by Hall, Akeem sets out to find a woman who loves him for who he is and not his regal status.

The movie is full of easy laughs based on Akeem’s misunderstanding of not only American culture but even simple manual labor. Otherwise, Akeem is one of Murphy’s least entertaining characters. Sure, he’s intelligent, caring, thoughtful and a natural conversationalist — the perfect catch for the love interest, Lisa McDowell, played by Shari Headley. But he’s not what makes the movie funny.

Most of the magic comes from Murphy and Hall’s other characters. They each take on multiple vibrant personalities throughout the movie.

First, we’re introduced to four barbershop mainstays, three of which are played by the two stars who ceaselessly argue about boxing. Murphy plays the actual barber and an old Jewish man who truly reminds me of my older relatives. Then Hall’s Rev. Brown takes the stage as an exaggerated preacher who can’t help but feel the Lord’s presence. Murphy’s Randy Watson does a hilariously bad take on a classic Whitney Houston song, living in a fantasy world where he and his band Sexual Chocolate dominate the charts.

Their many characters show the two stars’ talent, but ultimately aren’t the movie’s focus and fail to inject enough laughs to shake up the film. It actually feels less like a classic Eddie Murphy movie, and more like a slightly better-than-average romantic comedy. The real focus lies on Akeem’s desperate search for love and his battle for Lisa’s affection. He must take on her current boyfriend and her father, who’s under the impression he’s not worthy of his daughter. It’s honestly a tale that’s been told a thousand times, even in ’88.

There’s still something to be said about the message. Love is greater than all. No matter how many times I’ve seen it, it’s nice to see love winning over money and power. Still, Lisa and Akeem knew each other for less than a month and were sent off to be married, which is quick by most standards.

While the movie received negative reviews from critics, it still holds an important position as one of the most successful Black romantic comedies of all time. A Washington Post article found that like the recent movie Black Panther, Coming to America tells a story outside the common narrative of Black people fighting oppression.

“On one hand it was a romantic comedy; and on the other, a film about the Black cultural experience,” Amber Ferguson wrote in the Post.

The sequel comes out next month, more than 30 years since the original debuted. Murphy and Hall return to their famed characters, including many of the extras like the Rev. Brown and Randy Watson. Also returning are Shari Headley as Lisa and James Earl Jones as the king of Zamunda, the latter having just celebrated his 90th birthday in January. Longtime Saturday Night Live cast members Leslie Jones and Tracy Morgan also appear in the new movie — Murphy himself found fame on SNL after joining at just 19 years old.

Based on the trailer, it appears Akeem and Semmi must return to America to find Akeem’s son, the heir to the throne. Seeing the characters older and more mature might make for an interesting movie, though hopefully now they won’t be held back by romance. The movie will be most effective if Murphy and Hall can really act through these characters, using their immense comedic talent, without feeling the pressure of maintaining some seriousness as in the original.

Watch Coming to America now on Amazon Prime Video and look for its sequel starting March 5.