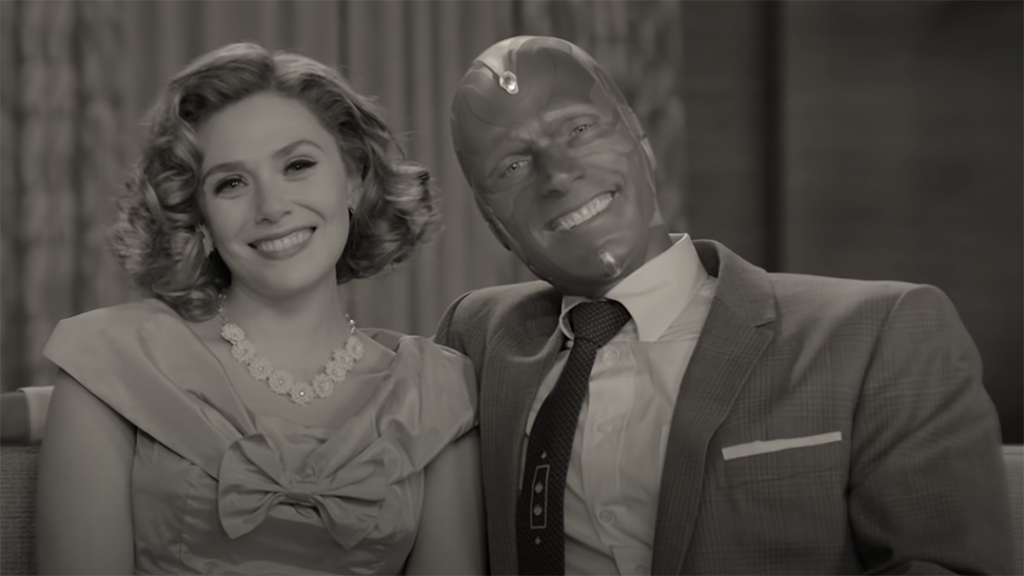 Generations of thinkers have claimed the ideal existence under a monarchial rule is to live under a benevolent king. If the first offerings from our corporate overlord Disney on its new(ish) streaming service are any indication, this hypothesis is correct.

Season two of The Mandalorian was a visually captivating and consistently entertaining reinvigoration of the Star Wars brand, and WandaVision, the first TV show from the Marvel branch of the company, appears to be cementing Disney+ as the home for some of Disney’s most daring output.

WandaVision follows Scarlet Witch (Elizabeth Olsen, maybe you’ve heard of her sisters; hint: they’re twins) and Vision (Paul Bettany, lankier than I remembered), two of the most underused and least interesting characters from the Avengers movies.

Despite their roles in the periphery of the Avengers movies, this show, with its strange premise and style, allows the characters — and its actors — to get weird. The execution of this character rehabilitation should become a case study for all entertainment services in how to rejuvenate their tired assets and make them sing again.

The show’s premise is remarkably aware of the history of television and people’s relationship with it. Scarlet Witch — or Wanda, as she is often referred to on the show — and Vision are living domestic life in a world that appears to be heavily aping classic TV sitcoms.

The show starts by emulating the milquetoast style of the 1950s and early 1960s in shows such as I Love Lucy and The Dick Van Dyke Show before transitioning to groovier — and more colorful — fare like The Brady Bunch. With Wanda and Vision’s preservation of their supernatural abilities from the movies, the show also exhibits similarities to more fantastical shows of the past, such as Bewitched and I Dream of Jeannie.

The show isn’t just a tribute to the sitcoms of yesteryear; it also exhibits elements of serialized storytelling that dominate today’s landscape. There are clear indications that something is awry in this strange Leave It to Beaver existence Wanda and Vision find themselves in.

Much of the show’s charm lies in how Olsen and Bettany seem to relish the opportunity to finally get their own stage to show off their abilities, rather than playing ninth fiddle to Robert Downey Jr. and Hollywood’s gaggle of dudes named Chris.

The way the two have thrown themselves into the hammy style of sitcom acting, where success is marked by selling every corny joke, is really quite impressive — and the results are very engaging. Another feather in the show’s cap is a delightfully over-the-top performance from Kathryn Hahn as the stereotypical nosy neighbor.

[I played Netflix roulette. Here’s how it went.]

What’s most interesting to me about this show is that, although it’s heavily indebted to historical TV comedies and ostensibly billed as such, it really just isn’t very funny. Instead, I view it as a drama, where much of the tension is drawn from the contrast between this prehistoric version of TV comedy and our own more modern sensibilities.

A lot of content from the last few years has argued that the Avengers movies mimic the model of TV shows by creating a highly serialized universe of interconnected movies. By ushering in its TV division with a show that is both an ode to classic sitcoms of a bygone era and a synthesis of that style with a mystery box thriller more at home in this era of TV, Marvel has essentially swallowed itself whole.

The irony of mixing sitcoms, which are famously stagnant in their storytelling, with this more serialized approach is certainly not lost on me, but what makes this show successful is that it isn’t lost on Marvel, either. By so admirably paying homage to classic TV while also subverting its tropes to tell a more modern story, Marvel has shown its TV division is no mere cynical cash grab.