We spoke to a Purdue beat writer to learn more about the No. 24 Boilermakers 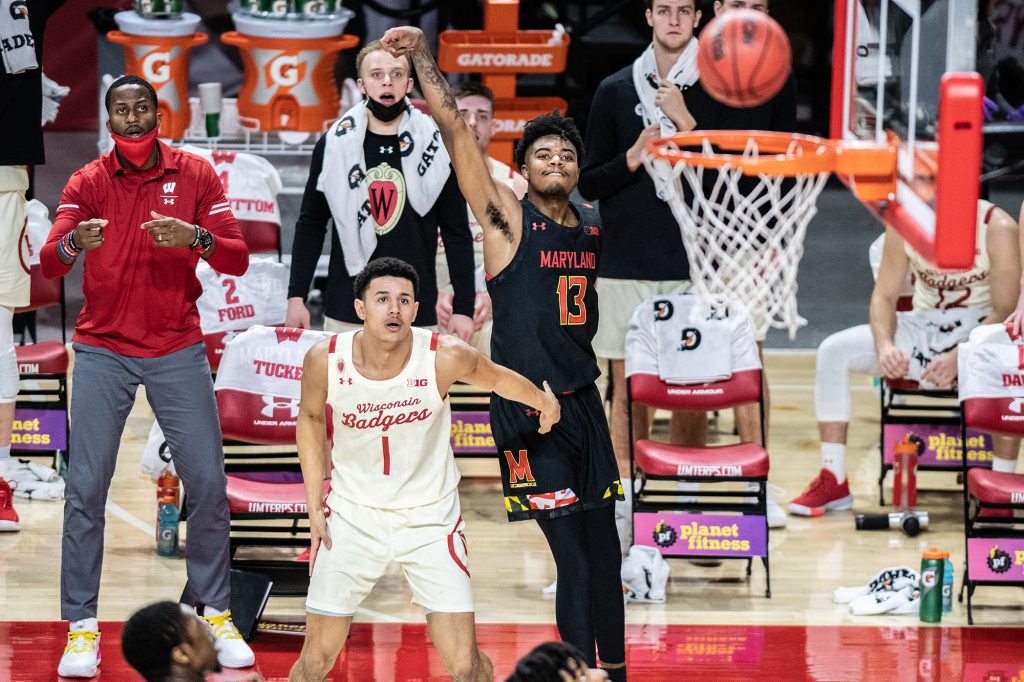 Guard Hakim Hart watches his shot attempt during Maryland's 61-55 loss to No. 14 Wisconsin on Jan. 27, 2021 at the Xfinity Center. (Julia Nikhinson/The Diamondback)

The Terps are back in College Park after splitting a two-game road trip against a pair of ranked Big Ten teams when they host the No. 24 Purdue Boilermakers. Just when Maryland thought they would catch a break from facing ranked Big Ten teams, Purdue jumped into the top 25 for the first time this season after a 5-1 stretch capped off with an 81-62 win over No. 21 Minnesota. With February finally here, this game is the start of a stretch that could either quickly end any tournament hopes for the Terps or could get them in position to be playing in March. To learn more about what Maryland will be facing Tuesday night, we got in touch with Steven Randall of the Purdue Exponent.

Purdue is ranked for the first time this season coming in at No. 24 heading into this matchup with Maryland. How has the team and its expectations evolved throughout the season up to this point?

I think the expectations have evolved pretty radically since the beginning of the season. Frankly, I don’t know if anybody expected anything like what we’ve seen when the season started in November. There was a lot of uncertainty around the youth of the team; you had experienced players transferring out or graduating and it left the team looking a little rudderless, especially in comparison to previous seasons. I think a lot of fans, including myself, had the thought of, “Oh, this season might hurt,” because it looked like they were losing a lot of the keystones that had held them together in the 2018-19 season. But then you see they’re 12-6 and No. 5 in the conference and they’re in the AP Poll, and they’ve shown flashes of brilliance already. I think this team is filled with raw talent, it’s had four different Freshmen of the Week and an outright Player of the Week, and the players are already cohering really well under Coach Painter. I think, no matter how this season ends, next year is the year to look out for, because they’ll have two of the top recruits in Indiana walking through the door and all of the existing guys returning with this year’s experiences. This is a surprising team now, but it’s going to be a really fun team next year.

The Boilermakers are coming off a game where they found themselves down 14 in the first half but ultimately came out on top after a 51-point second half. What helped spark that rally?

After that game, Brandon Newman talked about Mason Gillis’ 3-pointer as the spark that got them going, and that might be the best answer, I honestly couldn’t say. I think it speaks to a larger narrative around this team’s performances that we’ve been noticing recently. In a lot of our coverage we’ll write the words “a tale of two halves” or talk about the Boilers being a “second-half team,” the idea that they tend to win or lose a lot of games in the second half. Sometimes the team comes out flat in the first half and explodes after halftime, like we saw against OSU, MSU and Minnesota, and sometimes they open the game with a big show of offense and start to unravel in the second (the Miami loss, the first game against Maryland). I think it flows back to the youth of the team and the refining process it’s going through, the younger players are learning how to keep a consistent energy throughout the game.

Purdue had not been able to win a road game until January 8 and they have yet to lose one since. What adjustments did they make that helped spark their road winning streak?

Well *technically* they were on the road for Notre Dame (the Crossroads Classic in Indy) and Liberty/Clemson (the Space Coast Challenge), but those were neutral-site games, and I’ll agree they hadn’t been great in true away games up until that Michigan State game. I think it, like everything else about this season, traces back in some way to their youth. I think you’re just watching this team learn how to play basketball together and start to cohere in the middle of its games. It reminds me of something Coach Shrewsberry said before the Oakland game in November. He said you were watching the Golden Bears practice on TV, that they were developing their team play in the middle of the game, and I think that holds true for Purdue. You’re watching them improve and become a better team as the season goes on. The freshmen are stepping up, contributing big numbers and making key plays, the upperclassmen are playing (and talking) like leaders and it’s all starting to come together on the court. You almost hope that this year is their floor, because you can only imagine what their ceiling will be moving forward.