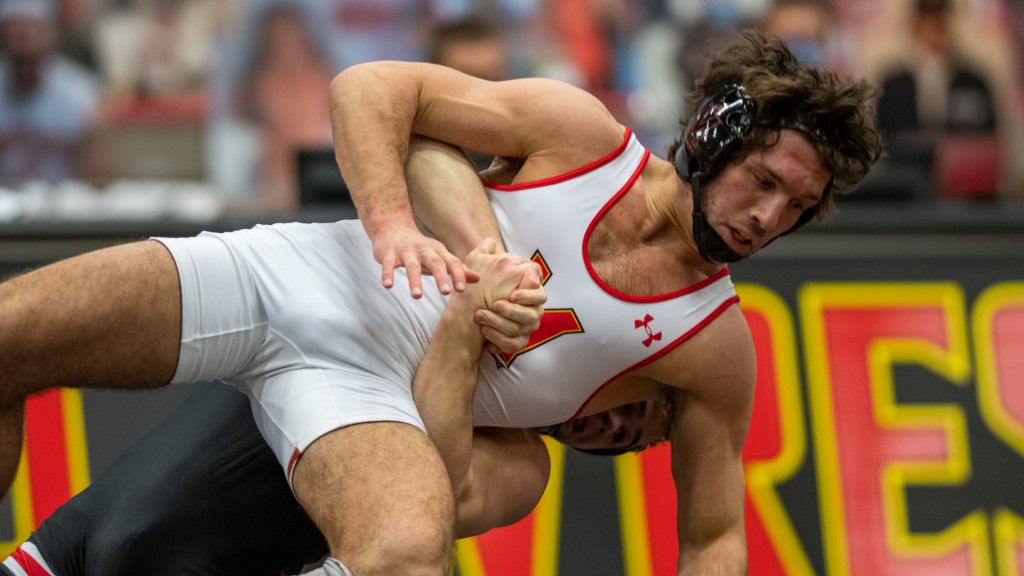 The 141-pound match was dramatic, with Echemendia showing off his strength and quickness throughout. Still, Bertoni rode Echemendia in the second period, keeping things close. And with 40 seconds left, they were deadlocked at six.

Echemendia grasped Bertoni’s leg, driving the redshirt junior toward the ground. And despite Bertoni’s best efforts, Echemendia secured the takedown, giving Echemendia a two-point edge — one he wouldn’t relinquish.

Bertoni’s defeat was as close as the Terps would get. Maryland huffed and puffed throughout, putting up some spirited displays throughout the day. However, the No. 6 Buckeyes were just too much Sunday afternoon, cruising to a 41-0 victory over the Terps.

[After almost a year off the mat, Maryland wrestling is relishing a return to normalcy]

The second period of Bertoni’s match was perhaps the most pivotal. Despite his defeat, the redshirt junior flashed his skill, using escapes to keep Echemendia at bay while securing a takedown.

Takedowns were a rarity for Clemsen’s squad Sunday afternoon, though. It started at 125 pounds, with Malik Heinselman making quick work of Zack Spence to secure a pinfall.

Jackson Cockrell fared better at 133, launching an impressive rally in the third period of his matchup with Jordan Decatur. With Decatur’s advantage at just two, Cockrell gambled. He tried to earn a pivotal take-down to knot the match at 11. Decatur wasn’t fooled, though. He reversed, notching a takedown en route to a 15-9 decision victory.

At 149-pounds, Hunter Baxter faced a similar challenge. Mirroring him was No. 2 Sammy Sasso, one of college wrestling’s brightest stars.

And while Baxter got a couple escapes in, Sasso took over, beginning to outclass Baxter in the second period. Eventually, the Buckeyes’ sophomore got Baxter in a cradle, pinning him to push Ohio State’s lead to 18-0.

In the 157-pound match Micheal Doetsch had his moments, notching a couple of escapes and an extra point via riding time. But at the end of the second period, Buckeyes Elijah Cleary took Doetsch down, doing just enough to escape with a 4-3 decision win.

Ohio State’s lead would only grow, courtesy of big victories over 165-pounder Jonathan and 175-pounder Philip Spadafora by way of major decision.

The 184-pound match proved far more dramatic, though. Kyle Cochran was locked in a 2-2 stalemate with Rocky Jordan, one that looked destined for an extra period. But Jordan landed a sudden reversal on Cochran to beat the buzzer in the third period and steal a 4-2 decision win.

“I wish I could have returned him flat to his belly, rode him out throughout the period and put it into overtime,” Cochran said.

The 197-pound match added to the dramatics on the day as it looked like Jaron Smith was going to pick up his first victory of the season against Chase Singletary. However, the officials ruled that a Smith near fall, earned in the final period, was for two seconds instead of four, much to the anger of the Terps bench. Despite a Clemsen challenge, the call was confirmed.

“I’m convinced that it was four points. I’ll have to watch it and swipe it out myself,” Clemsen said. “But I was almost 100% certain that there were four back points there.”

Singletary knotted things up shortly thereafter before taking Smith down in overtime to secure the victory.

“I feel like I didn’t put myself in the best position to finish that match off as hard as I could,” Smith said. “But that’s just training for next time.”

Tate Orndoff pinned Garrett Kappes in the following match as Maryland dropped to 0-6 on the season.