After almost a year off the mat, Maryland wrestling is relishing a return to normalcy 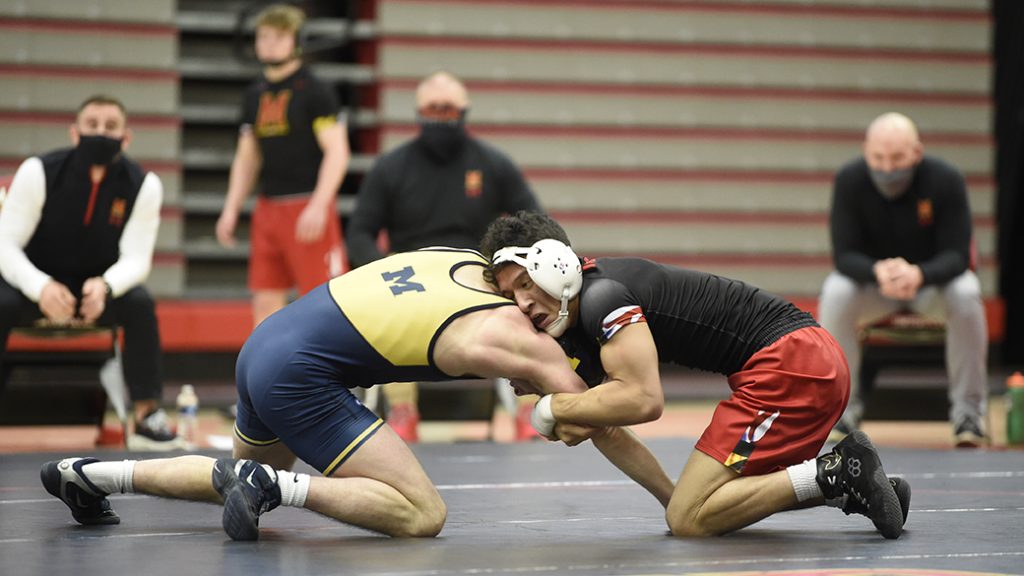 It was a long road back to the mat for coach Alex Clemsen and Maryland wrestling, and as the 2021 season gets underway, the Terps are just thankful for the chance to be able to compete and wrestle again.

Last season, Clemsen was about to finish his first season leading the Terps when the COVID-19 pandemic suddenly shut down college sports. Clemsen sent the wrestlers home expecting to see them in person two weeks later to begin the offseason.

But those two weeks turned into six months.

“I didn’t physically see our kids until the end of September,” Clemsen said. “It sucked, I mean there’s no other word for it.”

An offseason without physical contact meant Clemsen and his staff turned to Zoom to meet virtually with the wrestlers twice a week. The coaches and wrestlers participated in team bonding activities, such as a chapter book study, and held group discussions on social justice topics.

That helped bring the team closer, despite being scattered across the country.

“We had to be vulnerable with each other, and I think our team got closer because of it,” Clemsen said.

Redshirt junior Hunter Baxter had to quickly adjust to a summer without competing in any collegiate wrestling, trying to stay as prepared as possible while hoping for an eventual return to the mat.

That preparation meant using whatever he had in his basement and finding places to workout so he could be ready when he finally returned to College Park.

“For a while there, I could really only do pullups, pushups in my basement and anything with the weights that I had in my basement,” Baxter said. “As things started to loosen up a little bit, I was able to go get some individual workouts at some wrestling clubs around me because they have limited capacity, which I’m very thankful for.”

Over the summer, redshirt junior Danny Bertoni’s preparation for a potential season included running, CrossFit and heavy lifting at his home gym.

But whatever Bertoni did at home was nothing compared to the thrill of the chance to compete on a wrestling mat again.

“As a wrestler or as an athlete, I’m just used to competing in anything, and I didn’t have that aspect for seven, eight months at a high level,” Bertoni said. “So I definitely missed that, the edge of trying to be the best and the best version of myself.”

[Maryland wrestling shut out in tri-meet with Michigan State, Minnesota]

When the Terps returned to College Park in the fall, the landscape was far different from the place they left. Maryland’s wrestlers had to undergo regular COVID-19 testing while adjusting their personal lives to stay safe.

And when the Terps finally got back on the mat in November for preseason practice, the overwhelming feeling was relief. Despite the difficult circumstances, a wrestling season was happening — and the reward at the end of a tumultuous offseason was well worth it.

“For the kids’ sake, for our team’s sake, I’m really grateful for them,” Clemsen said. “You know, just feel a lot of gratitude that they have this opportunity to have some normalcy.”