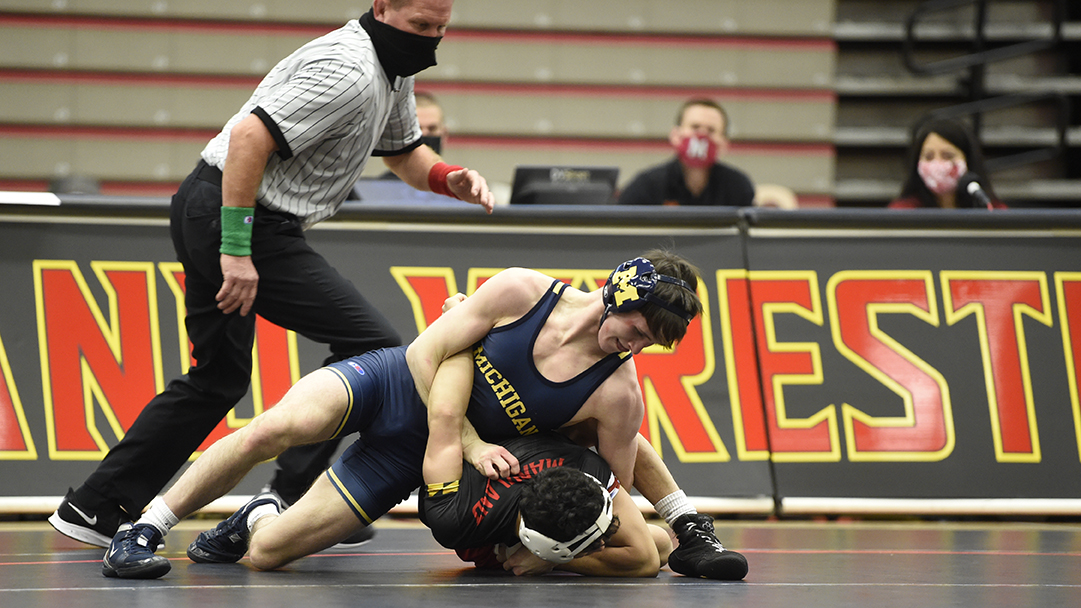 174-pounder Philip Spadafora thought he had a win for Maryland wrestling. He took down No. 25 Northwestern’s Troy Fisher to the mat twice, and appeared to have secured a rare Terps victory.

But a replay review reversed both takedowns, meaning Spadafora had lost by decision, 5-4. He skulked off the mat, and refused to shake Fisher’s hand — being tagged with unsportsmanlike conduct in the process. And, more importantly, a dock of two team points for the Terps.

That loss and resulting penalty led to a decisive five point swing in the match. Instead of taking a 13-12 lead, Maryland trailed 15-8. It was a deficit the Terps couldn’t recover from, as they dropped the first of two meets on the day, falling to the Wildcats, 21-12.

“It was a big swing,” Clemsen said.

[Maryland wrestling shut out in tri-meet with Michigan State, Minnesota]

Maryland didn’t fare much better in its second meet of the day. No. 6 Nebraska poised a much bigger threat than Northwestern. And the lopsided nature of the matchup played out on the mat — as the Terps lost, 38-0.

“Though the scoreboard was 38 to zero, there were 6 to 8 wars that they had to win,” Clemsen said. “Kudos to them, they’re the sixth best team in the country for a reason.”

Despite going winless on the day, Maryland drew numerous positives from the unusual tri-meet format. A series of strong individual performances, especially in earlier meets, showed the Terps’ progression on the mat, and proved that they could hang around with some of the Big Ten’s best.

Maryland looked better than it has all season, as Danny Bertoni, Michael Doetsch, Jonathan Spadafora and Kyle Cochran all won individual bouts against the Wildcats.

The Terps were shutout in last week’s tri-meet, but Bertoni got them on the board early Saturday. He notched the Terps first win of the day with an early takedown to the mat in the first period — winning by decision 5-2 against the Wildcats Frankie Tal Sahar.

Doetsch built off that momentum, starting off the third period in the bottom position and securing a key escape to win by decision, 3-2, over Maxx Mayfield.

Cochran picked up his second win of the season, besting Jack Heyob by major decision, 8-0. He dominated with early takedowns in the first period and notched over three minutes of riding time throughout the match.

“I wrestled the way that I’ve been training to wrestle just continuously, keeping the pressure on and always getting on my offense,” Cochran said.

The Terps were knocking on the door after Jonathan Spadafora went on an offensive flurry in the second period. He scored eight unanswered points behind three takedowns, comfortably beating David Ferrante. He secured a victory by major decision 11-3 — leaving Maryland’s deficit at just 12-10.

“I scored a takedown and I got two swipes for back points,”Jonathan Spadafora said. “I then knew I had the match under control and it was only just a matter of time before I got the major decision.”

[Maryland wrestling falls to No. 3 Michigan in season opener, 38-3]

But it was the closest the Terps would ever get — a slow start left them clawing back into a sizable deficit.

Zack Spence opened the afternoon by coming up short in his dual debut, losing by decision 8-5 to Northwestern’s Matt Vinci. Jackson Cockrell showed fire early, but quickly suffered a pinfall loss in the first period to Chris Cannon.

Suddenly, just like in weeks past, the Terps were down 9-0.

When the Terps needed a spark at the end, Jaron Smith put up little offense against Northwestern’s Lucas Davidson, losing by decision 5-1. And, by the time Garrett Kappes lost by decision, 2-1, Maryland lost its chance of a first ever Big Ten win.

The second meet of the day didn’t treat the Terps much better. They were shut out by a dominant Nebraska squad — never really getting into the match. Spadafora and Doestch showed glimpses in their bouts, but neither could grab a hold against superior opponents.

Other Maryland wrestlers held their own for spells. Cochran went back and forth against Nebraska’s Taylor Venz. However, Venz secured a late takedown with 30 seconds left in the third period to break a 2-2 stalemate and earn a testy 4-2 decision win. Otherwise, Maryland failed to find any footing.

So, the Terps fell to a rampant Nebraska squad.

But the day wasn’t without positives. Though Maryland continued to slip in the Big Ten, individual performances — against some of the conference’s best — showed that the Terps can hold their own in some bouts.

For now, in the most loaded league in the country, it’s those few wins, those slight improvements, that Maryland has to cling to.

“I thought our guys wrestled as well as they have since I’ve been the coach of Maryland,” Clemsen said. “We had a chance to win a duel against Northwestern and we didn’t, we got to capitalize when we have opportunities to get wins in the Big Ten.”