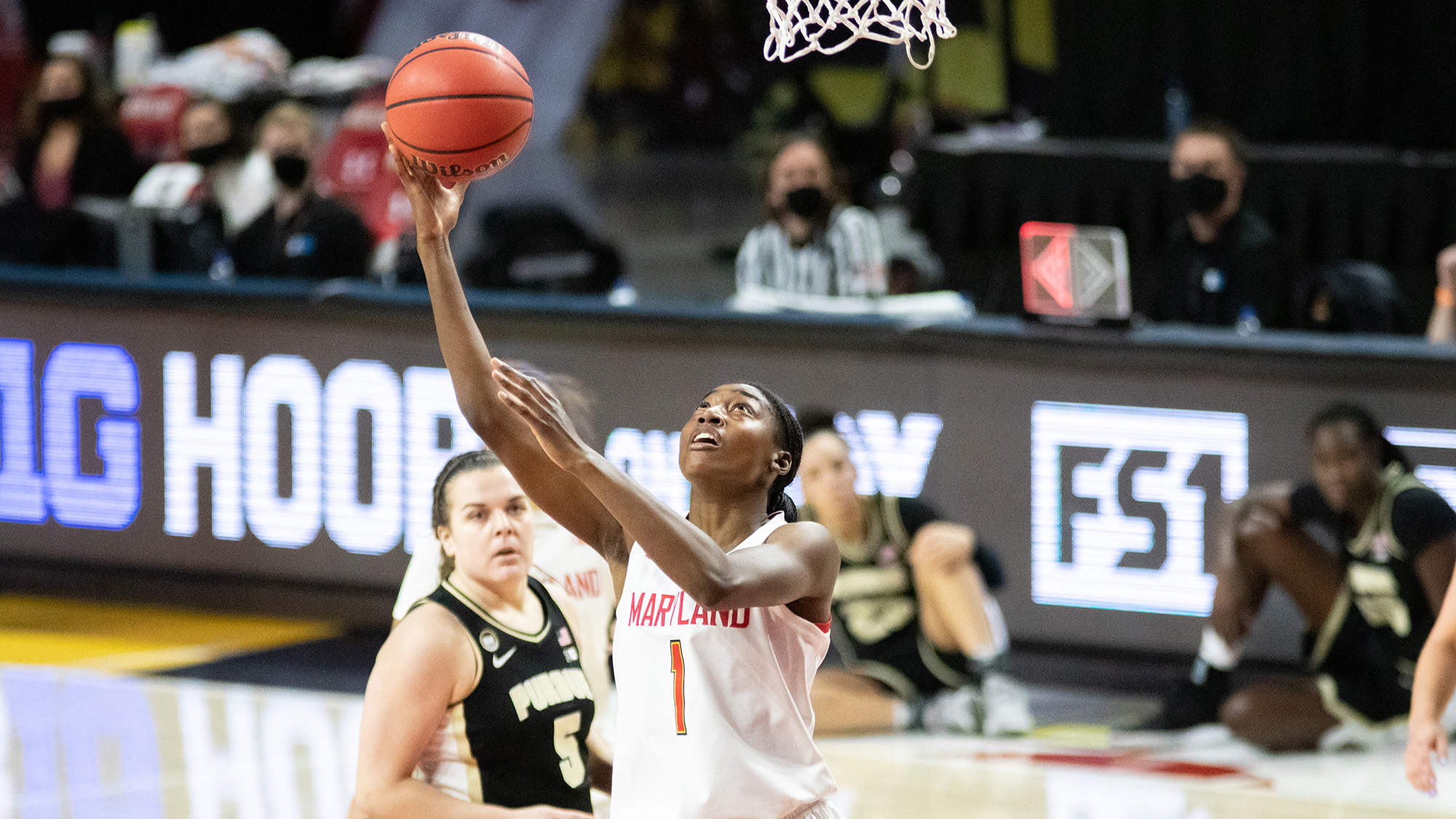 Diamond Miller caught a pass toward the end of the third quarter and sized up her defender. As she neared the free throw line, she suddenly crossed over to her left, creating just enough space to lower her shoulder and power through the Minnesota defender, knocking her over and finishing for the and-one.

That bucket was two of Miller’s 23 points. And her aggressive play was one of the main factors that helped Maryland women’s basketball overcome a sluggish first half to claim a decisive 90-73 victory over Minnesota.

“I thought it was one of Diamond’s best games she’s had on both ends of the floor,” Frese said. “She was able to defend for us and her offense came easily because she was putting so much great focus and energy on the defensive end.”

While the Terps ended the first half just up seven, they found another level out of the break, going on an 8-2 run to extend their lead to 13. That run was punctuated by Miller, who caught a kick-out pass from Ashley Owusu and knocked down a wide-open three.

The Terps’ defense was subpar in the first half, but picked up as the game went on. After allowing Minnesota’s Jasmine Powell to make four threes in the first half, Maryland limited her to just 8 points in the second. The Gophers’ shooting dropped sharply after a first half where they shot 51.7 percent, dropping to just 39.3 percent in the second. It all led to a dominant second half for Brenda Frese’s squad, who outscored Minnesota 40-30 in quarters three and four.

“Love our response out of the locker room,” Frese said. “I thought the third quarter obviously was Maryland basketball, how we know how to play and a terrific response.”

Miller was the standout performer for the Terps, pouring it on with the ball in her hands while locking in defensively on the other end of the court. In the first few minutes of the game, she put together a sequence emblematic of her play, starting with a resounding block, and finishing with a skip pass to Owusu for a corner three.

Shortly thereafter, she jumped a passing lane, anticipating and intercepting Sara Scalia’s pass and taking it down for an uncontested layup. Miller would finish with two steals and add a pair of blocks.

In the first half, Maryland’s offense kept it ahead. On one play, Faith Masonius had fallen to her knees. The guard was about to fall out of bounds with the ball but instead flung the ball wildly over her head. Somehow, it bounced perfectly to her teammate Chloe Bibby, who took it and ran, going coast-to-coast before stepping past a Minnesota defender for a layup.

[Maryland women’s basketball moves up to No. 9 in latest AP poll]

Bibby, who has started every game this year, finished with 22 points on 7-of-13 shooting. She made two threes in the game, including one tightly contested bucket at the end of the first quarter that put the Terps up 25-17. She also added nine rebounds, six of which led to second chance opportunities.

“We were just finding each other and my teammates were finding me,” Bibby said. “I was just trying to finish where I could and really trying to get on the O-boards.”

Her sharpshooting counterpart, Katie Benzan, was similarly dynamic from behind the arc, making 6-of-10 attempts. She was also hitting tough shots, including one early in the third quarter where she ran off a pair of screens from Mimi Collins and Diamond Miller and splashed home a three. She hit another big one in the fourth, catching and firing on a three-pointer from well beyond the arc. She would finish the night with 20 points.

These contributions made up for an off shooting night for Owusu, who made just 5-of-15 field goals on the night. But she made up for it with some deft passing, finishing with eight assists.

The game yet again displayed the immense scoring depth on the Terps. Three players scored twenty points or more, and none of them were the team’s leading scorer coming into the matchup.

“It speaks volumes to our great talents and the depth that we have. When we share the basketball great things are in store for us,” Frese said. “But we know we can score the basketball on the offensive end for us the concern is now the defense and the rebounding, that we can play a more complete game.”