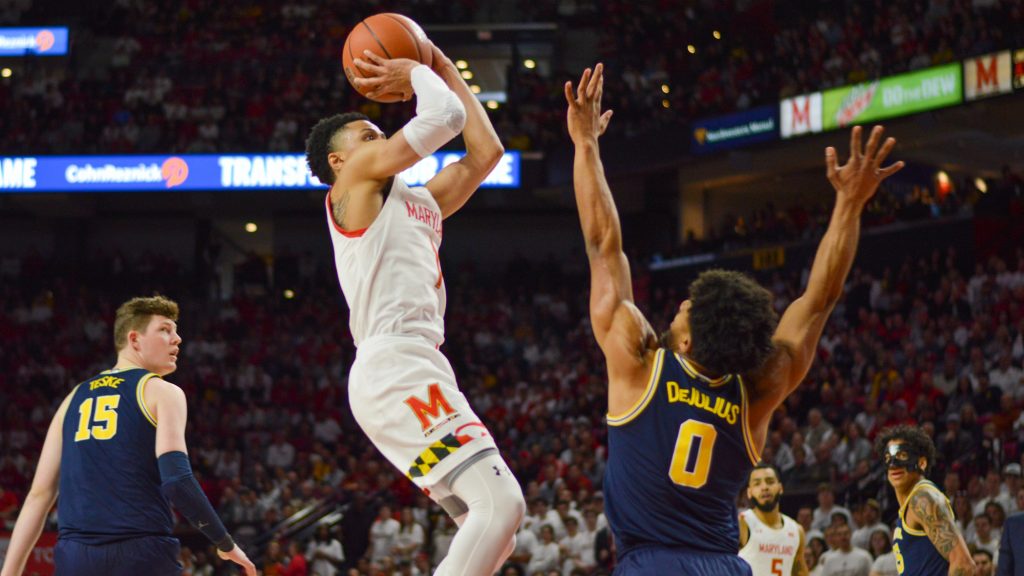 Guard Anthony Cowan Jr. goes up for a jumpshot during Maryland's 83-70 win over Michigan at Xfinity Center on March 8, 2020. (Joe Ryan/The Diamondback)

After four seasons with the Maryland Terrapins men’s basketball program, Anthony Cowan Jr. left as one of the more storied players in school history. Cowan’s 1,881 career points rank seventh all-time in Maryland history and his 584 assists are fifth. He joins Greivis Vasquez and John Lucas II as the only player to be in the top 10 of both categories.

During the 2021 NBA G League Draft, Cowan found a new professional home with the Memphis Hustle. The Hustle, the G League affiliate of the NBA’s Memphis Grizzlies, used their first-round selection, the 16th overall pick in the draft, on Cowan.

With the No. 16 overall pick in the 2020-21 NBA G League Draft, the Memphis Hustle have selected Anthony Cowan Jr. from Maryland.

Last season the Hustle had the fifth-best record in the league before play was halted due to COVID-19.

The G League has been fruitful for former Maryland players who were not able to crack the NBA, with Dez Wells, Melo Trimble and Diamond Stone highlighting the list of former Maryland stars to appear in the league. Jake Layman and Bruno Fernando had also spent time in the G League, however, both were contracted to NBA teams at the time.

The G League has also become a great place for players to showcase their skills and get called up to the NBA. In the 2018-19 NBA season, 52 percent of players on an NBA roster had spent time in the G League.

The 2021 G League season will be in a bubble at Disney World with the games being played at the ESPN Wide World of Sports Complex. Only 18 G League teams will be participating, and the top eight teams will make the playoffs.