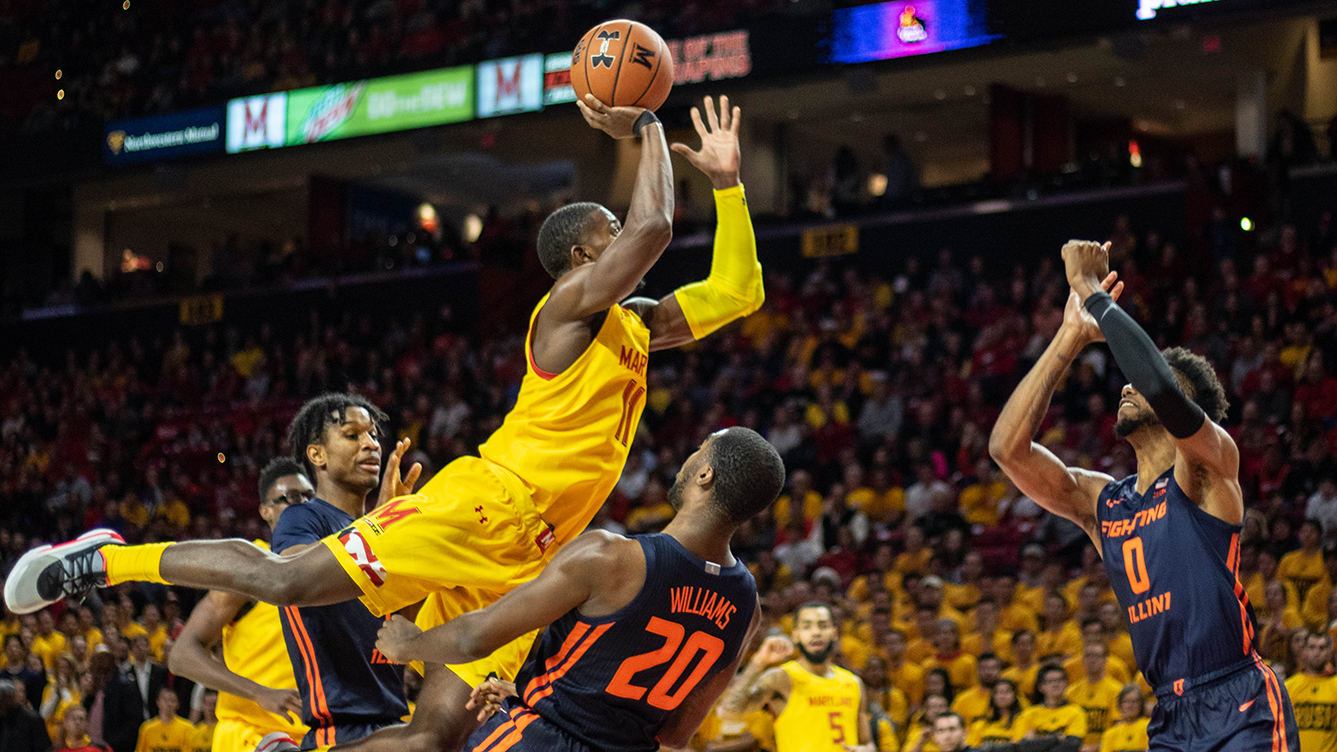 Last Maryland Win: February 7, 2020 – Maryland 75-66; With the Terps sitting 18-4 and ranked No. 9 in the country, they traveled to Illinois to take on a Fighting Illini team that had tested them earlier that season. The Terps overcame a double-digit first half deficit to break the hearts of the Illinois crowd. A Jalen Smith dunk with 16:21 left in the second half gave the Terps the lead for good. Anthony Cowan Jr. led the Terps with 20 points while Darryl Morsell chipped in 15 points and Smith had a double-double. That game fired the Terps into sole possession of first place in the Big Ten.

Last Illinois Win: January 26, 2019– Illinois 78-67; The Terps were ranked No. 13 in the AP Poll and were set to face a 5-14 Illinois team at Madison Square Garden. After a pair of Bruno Fernando free throws late in the first half gave Maryland an 11-point lead, the Terps seemed destined to run away with a victory. However, Illinois closed the gap late in the first half and ultimately took the lead for good after a Tevian Jones three-pointer made it 62-59 with under five minutes remaining.

Best Maryland Moment: December 7, 2019; After a 9-0 start shot the Terps to No. 3 in the AP Poll, the Terps opened their Big Ten play against an unranked Illinois team who would ultimately turn into one of the league’s top teams by the end of the 2019-20 season. The Terps trailed by 14 points at halftime and were down by as many as 15 points in the second half. Yet, led by Anthony Cowan Jr, Jalen Smith and Darryl Morsell, the Terps mounted a furious comeback to get back into the game. With under 25 seconds left and the Terps down 58-55, Cowan Jr. launched a deep three-pointer from the left wing and tied the game. On the ensuing defensive possession, the Terps got a steal and Cowan Jr. was fouled and ultimately hit the game-winning free throw, giving the Terps a 59-58 victory.

Heartbreak for the Illini! #3 Maryland eeks out a 59-58 win over Illinois after trailing for nearly the entire game.

Best Illinois Moment: January 7, 2015; Illinois has pulled off a few upsets over the Terps since Maryland joined the Big Ten but this upset victory may have been the most shocking. The Terps were rolling at 14-1 when they visited State Farm Center in Illinois. Behind Melo Trimble, Maryland got off to a 28-26 halftime lead. In the second half, the tide completely changed as Illinois went on a 20-3 run led by Malcolm Hill, who scored 28 points to lead the Fighting Illini to a 64-57 upset over No. 11 Maryland.