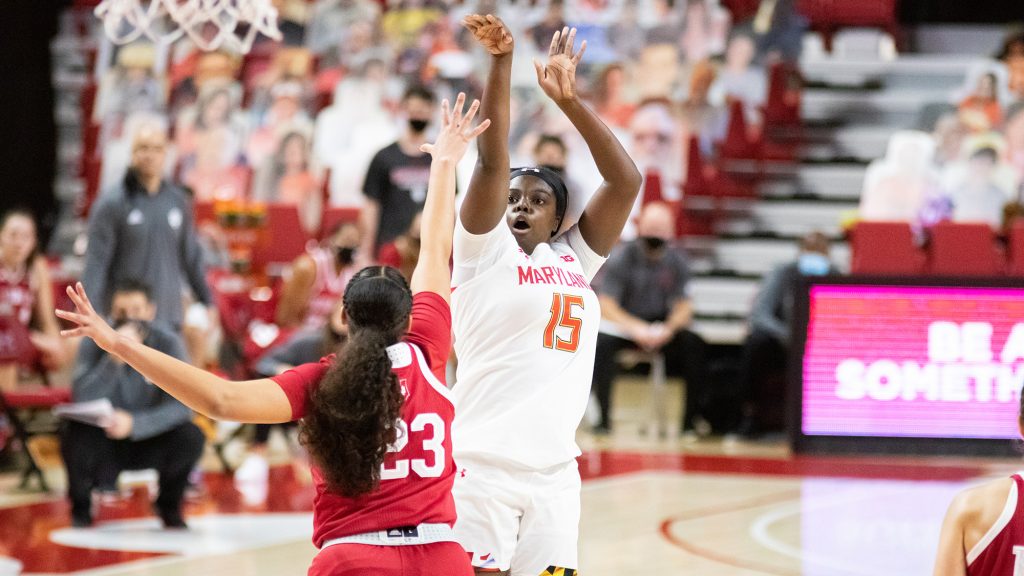 Ashley Owusu pulls up over an Indiana defender during Maryland’s 84-80 win over Indiana on Jan. 4, 2021, at the Xfinity Center. (Julia Nikhinson/The Diamondback)

Ashley Owusu started 2021 in the way she ended 2020: as a deadly midrange shooter. She caught a pass at the three-point line and executed a lightning-quick crossover that had her defender careening into a screen. With more than enough time and space, she knocked down what seemed like a warm-up jumper.

After dropping 34 points against Penn State on New Year’s Eve, Owusu returned to her midrange game — while displaying her passing abilities as well. She tallied 20 points on 9-of-17 shooting and added five assists, leading Maryland women’s basketball to a hard-fought 84-80 victory over No. 19 Indiana.

“I thought Ashley just made great decisions. Being able to hit the roll, the pop, being able to know when to be able to attack,” head coach Brenda Frese said. “That’s what makes Ashley such a great floor general.”

The Terps endured a more difficult second half, as they let the Hoosiers cut their lead to just three at one point, but they fought off their Big Ten opponents, with Owusu as the steady provider.

[With Indiana looming, Maryland women’s basketball is relying on its versatility]

In the midst of a third quarter slump, Owusu regained control of the offense and the game, scoring six points. It started innocently enough, with a quick jumper. She would then add on a contested one-legged fadeaway.

And she wasn’t finished. After a missed Indiana three, Owusu caught a pass and instantly flicked an outlet pass down the court for a Faith Masonius layup — keeping Maryland ahead.

“I’m just taking what the defense gives me and not predetermining what I’m going to do with the ball,” Owusu said. “Just being alert and aware of what’s going on.”

After starting slowly in their first two conference matchups, the Terps opened their third with style. Katie Benzan shook off notions of a cold spell from the field, nailing a step-back three to open the scoring — sparking a 10-0 run. Although she didn’t score in that opening stretch, Owusu had her fingerprints on that run, assisting on a fastbreak layup for Diamond Miller and a corner three for Benzan.

And Maryland didn’t look back. That fast start continued until the end of the period, as Maryland finished the frame up 23-9. Its defense was stifling, as the Hoosiers had more turnovers — five — than shots made — four.

“I think we were just ready to play,” forward Chloe Bibby said. “We knew that Indiana [was] going to be a tough team, and I think it all started in our warm up when we were hyped and we were locked in early.”

The second quarter offered much of the same. The Terps spread the scoring efficiently, with Owusu and Chloe Bibby hitting contested shots in the face of a more energized Indiana defense. Bibby finished with 15 points.

Meanwhile, the Hoosiers went through the same offensive struggles. Though they looked after the ball more carefully, they couldn’t keep pace with the Terps, as the home side went into the half up 41-29.

After maintaining Maryland’s lead in the third, Owusu’s strong play continued in the fourth. She dropped off a deft pass to Bibby to open the scoring in the quarter. With Indiana scoring baskets on nearly every trip down the floor, Miller came alive and began to match them. She scored 18 of her 20 points in the second half to keep Maryland ahead by a comfortable margin, including on one play where she cut past her defender, received a pass from Mimi Collins, and finished through contact for the and-one.

While trying to get open with just over three minutes left in the game, Miller attempted a swim move and knocked her defender in the mouth for a foul that was upgraded to a flagrant. The ensuing free throws and possession cut the Terps lead from eight to five, but Collins finished a floater through a foul to keep the lead intact.

But the margin was incredibly thin, and with under 30 seconds left, Indiana stole a Maryland inbound pass, appearing certain to cut further into Maryland’s advantage. But Miller was back to contest and was able to secure a rebound.

She then missed two free throws, allowing the Hoosiers to cut the deficit to just four with 18 seconds left. But Benzan and Owusu combined to go 5-of-6 from the free throw line down the stretch to secure the victory.

“I thought we made a lot of necessary free throws,” Frese said. “I think Katie Beznan went four four for us, which was really key.”

Despite Maryland leading wire-to-wire, the advantage never felt entirely safe in an inconsistent Terps effort. However, in a stacked Big Ten, wins like this will be welcomed, matchups filled with pivotal moments and high-level plays down the stretch that can swing the balance of a contest and a season.

“I think the key was the resiliency of our team,” Frese said. “To be able to make late game free throws and make the plays that we had to make, to be able to come away with a win against a great Indiana team.”