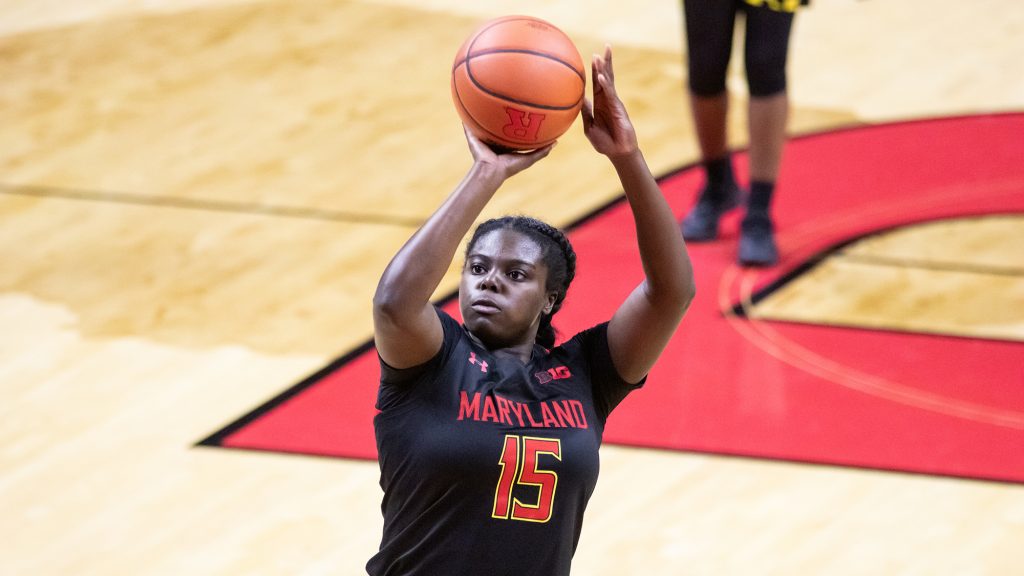 The lead was slipping away from Maryland women’s basketball. Late in the third quarter, Penn State was on a 6-0 run, cutting its deficit to just seven.

But with seconds left in the frame, Ashley Owusu took her signature shot, a pull-up jumper just inches in front of the three-point line. The ball dropped in as the buzzer sounded, punctuating a record-breaking night for the sophomore guard.

Owusu scored a career-high 34 points, leading Maryland to a 96-82 win on a day when the rest of the Terps desperately needed her contributions.

“I thought she was so aggressive, [she] set the tone for us on both ends of the floor and we were able to feed off of her,” coach Brenda Frese said.

Coming off a 12-day break, Maryland hoped to avoid the rust that plagued it the last time the Terps had a break that long. But just like in its conference opener against Rutgers, Maryland was slow out of the gate.

The Terps showed signs of rust early, starting the game just 1-of-10 from the field while missing layups and falling behind. They’d finish the opening quarter shooting 7-of-21 and only led 16-15.

“We had to kick off some rust with the great break we had at Christmas as well as [we] haven’t played a game in 12 days,” Frese said. “So it was something that I was kind of expecting.”

But from that point on, it was Owusu’s show.

The sophomore took over Maryland’s offense, draining five of her eight shots in the second quarter. With four minutes left in the frame, Owusu caught a pass on the wing and drained a three with a hand in her face.

And she closed the half in style. Using a pick to switch into a better matchup, Owusu took one crossover dribble past the three-point line, generating just enough space to pull up and hit a mid-range jumper with four seconds remaining.

“Just being aggressive, taking what the defense gives me,” Owusu said. “If they sag off, hit the pull-up, if they came up, driving to the basket and creating for myself and my teammates.”

In the third quarter, the Terps were dynamic in transition. Midway through the period, Owusu finished back-to-back easy layups on the break off missed shots for the Nittany Lions. Maryland ran up and down the court, finishing with 33 fastbreak points, many coming off Penn State turnovers.

Frese’s squad swarmed passing lanes, forcing 19 turnovers, including 12 in the first half. They scored 24 points off those miscues, including one play at the end of the first quarter where Katie Benzan intercepted a Nittany Lions pass and took it back the other way for a floater.

“We wanted to push it as much as we could in transition,” Frese said. “They’re a great transition team, we wanted to put a lot of pressure on them on the defensive end.”

However, Maryland fended off the threat with timely baskets, including two layups for Owusu and a late dagger of a three from Benzan — her only make from deep all afternoon — to ice the game and finish off the Nittany Lions in a convincing road win.

“I loved our effort and energy when they made runs on us,” Frese said. “It would never faze us, we were able to continue to keep making plays for each other.”