With Indiana looming, Maryland women’s basketball is relying on its versatility 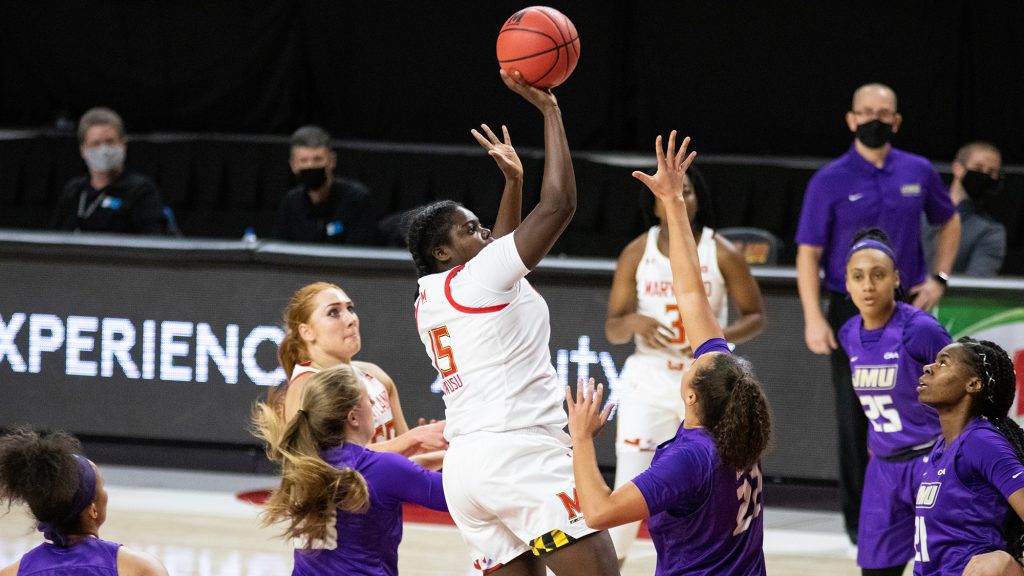 Ashley Owusu rises for a shot during Maryland’s 101-59 win over James Madison on Dec. 19, 2020, at the Xfinity Center. (Julia Nikhinson/The Diamondback)

With just over seven minutes left in the first quarter against Penn State, Katie Benzan squared up for a corner three, but this one wasn’t like many of the others she’d taken this season. Instead of tickling the twine on the way down for a smooth trifecta of points, this one missed.

It was a regular sight for Benzan and the rest of the Maryland women’s basketball team on Thursday, who shot just 4-of-19 from deep in their conference matchup against Penn State.

That atypical performance for one of the Big Ten’s most prolific three-point shooting teams could have led to an upset victory for the Nittany Lions, but the Terps emerged with a 96-82 victory, displaying a crucial skill: the ability to win in different ways.

“I think it’s the mark of a great team when you can go on the road and not play your best game and win,” coach Brenda Frese said.

As Frese’s squad heads into the heat of the conference schedule, it hopes to shoot better after knocking off the rust from an extended holiday break. Maryland will also try and see what it can replicate from the Penn State game moving forward.

Some of last week’s play could be hard to repeat. Ashley Owusu scored a career-high 34 points and went 15-for-22 from the floor. The sophomore guard scored from everywhere, but was particularly effective from midrange, regularly rising up and sinking long pull-up twos with ease.

But the Terps can’t rely on a career performance like that every game. Instead, the team will likely have to dip into its scoring depth. In seven games this season, it’s had five different leading scorers and at least four players in double figures in every contest. That depth has led the Terps to the Big Ten’s best offense.

While Maryland overcame its shooting deficiencies with Owusu’s scoring outburst, it also turned in one of its strongest defensive efforts of the season. The Terps forced 19 turnovers, including a season-high 13 steals. Maryland scored 24 points off those Penn State mistakes, which also let the Terps run rampant in transition for 33 fast-break points.

“We wanted to push it as much as we could in transition,” Frese said. “They’re a great transition team, we wanted to put a lot of pressure on them on the defensive end.”

In its perfect world, Maryland would continue to shoot above 40 percent from beyond the arc and use its sharpshooting abilities to thrive offensively, cruising to double-digit blowouts. But in an ultra-competitive Big Ten, that will almost certainly not be the case.

There could be many games when the Terps shoot poorly, when the ball doesn’t drop smoothly through the net, when Benzan and her teammates go cold from behind the arc. If those games come at the wrong time and Maryland doesn’t have a counterpunch, it might be in trouble.

Whether the Terps can continue to develop that counter remains to be seen, but they have a prime opportunity to prove themselves Monday against a ranked Indiana squad that’s looking to pull off an upset in College Park.

“Our Penn State game is really a testament to our mental toughness,” forward Chloe Bibby said. “We’re not knocking down shots from beyond the arc, so let’s get inside and let’s really disrupt them on defense and get a bucket the other way. … We’re just trying to do different things to make us a championship team.”