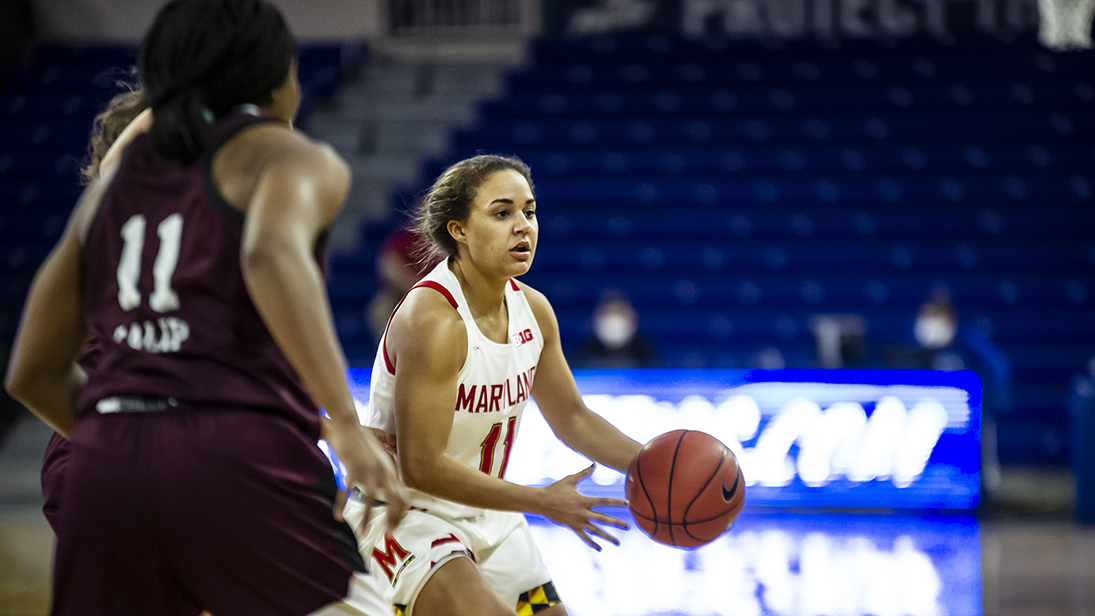 COVID-19 was bound to affect every part of Maryland women’s basketball’s season, and it’s done exactly that. Although the team has not reported a positive case since the season started, the virus has drastically affected its year.

The Terps have already had three games either canceled or postponed due to positive tests in opposing programs, causing some long breaks in Maryland’s schedule. After two non-conference games were called off, the Terps had an 11-day break before beating Rutgers in their Big Ten opener. Now, they’ll head into their second conference game against Penn State after not playing a game in 12 days.

Maryland is looking to avoid some of the rust its players initially faced after their last lengthy break.

The long break seemed to affect the Terps in the first half against Rutgers. Despite the quality of its opponent, Maryland was uncharacteristically inefficient shooting the ball, failing to pull away from the Scarlet Knights until later in the game.

The Terps only shot 5-of-16 from behind the three-point arc, well below their Big Ten best season average of 45 percent.

“You know, I think for all shooters, maybe there’s an adjustment getting used to the baskets when you haven’t had shootaround and not much warmup time,” coach Brenda Frese said.

Katie Benzan — the conference’s leader in three pointers made (26) and three-point percentage (55 percent) — shot just 1-of-4 in the first half. But she said she didn’t feel that was due to the disruptions.

“Personally, I’m not a superstitious person so I don’t typically have a routine, just for that reason in case things are out of my control.” Benzan said. “I just can’t control what happens before the game.”

Still, the Terps were able to find their hot shooting and squeak by with a victory, 91-87. They made 6-of-10 threes in the second half, three of which came from Benzan. But the game was fraught with tension, and Maryland could have very well lost if its poor shooting had continued.

Frese and her team say they don’t necessarily see the pause between games as a negative. It offers them something they need now more than ever: rest.

[With a slim rotation, Maryland women’s basketball is trying to conserve energy]

The Terps are playing with a shortened rotation of just seven players, burdening each one with hefty minutes.

“We don’t have a deep roster this year. There’s not as much pounding on our players,” Frese said. “[It’s] a chance to be able to really fine tune and use film and really refresh our team with the amount of minutes that our top rotation is playing right now.”

The extended breaks between games also granted Frese more time to work with her players in practice.

“I think coaches have always complained about not having enough practice time,” Frese said. “We’ve got more than enough [time] this season to really develop the skills of our players.”

And as the Terps head into Happy Valley to take on the Nittany Lions, they’ll try to use the increased rest and practice time to overcome any rust the 12-day break may have caused.

“They worked really hard in the offseason,” Frese said. “They’ve put that time in, but no matter how small our rotation is, they can play for 40 minutes.”