As Big Ten play ramps up, Maryland men’s basketball is looking for a closer 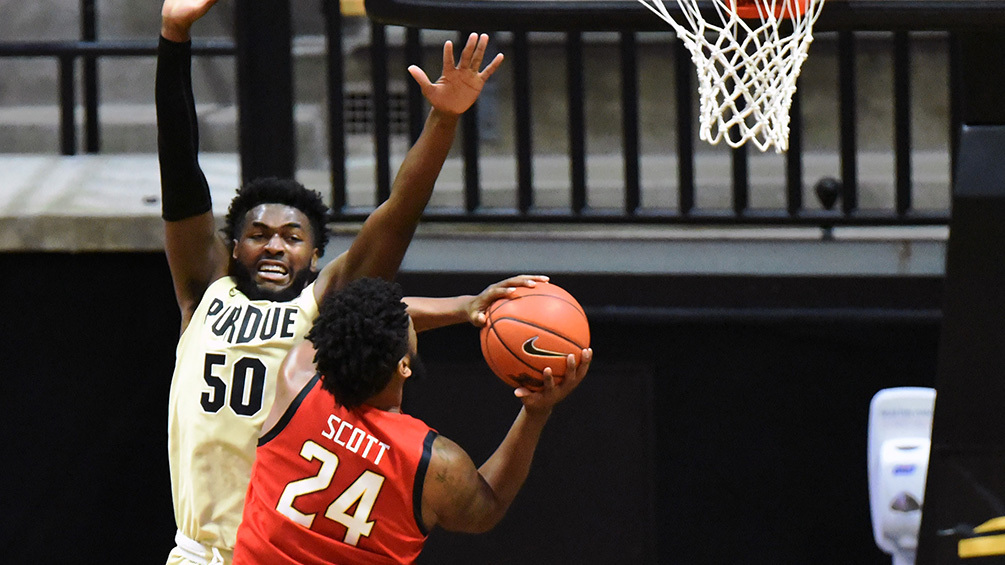 The Terps’ body language told the whole story. Darryl Morsell was the architect of hope for Maryland men’s basketball just seconds earlier, blowing past a late closeout before drawing a shooting foul with 19 seconds left on the clock. The Terps were down two against Purdue, looking to force overtime in a game in which they had been far behind for a large portion.

But he couldn’t deliver at the free throw line. Morsell’s shots clanked off the iron. Assistant coach Bino Ranson drew his hands to his face. Head coach Mark Turgeon let out a slight shrug. And as Morsell walked down the court following his second miss, his head was down, his shoulders slumped.

It was the type of situation in which Turgeon’s past squads have specialized, benefiting from a deep Anthony Cowan three or an acrobatic Jalen Smith tip-in.

Now, Maryland is without Cowan and Smith. And although Christmas ended in heartbreak for the Terps, their late-game looks seem to point toward a “closer by committee” approach, putting faith in a variety of players rather than just one or two.

“I think it’s going to be different every night with our team,” Turgeon said.

Maryland’s depth has been a key component to Turgeon’s adjustments so far. The tenth-year Maryland coach has previously mentioned how he feels the Terps have “seven starters,” a stark contrast from some of the more top-heavy sides he has coached in the past.

And through the opening eight games of the year, Turgeon’s assertion has proved true. Hakim Hart dropped 32 against Saint Peter’s. Eric Ayala scored 23 to vanquish La Salle. Morsell, Aaron Wiggins and Jairus Hamilton have flashed their offensive chops as well.

But one player has remained consistent, even as Maryland has toiled in early conference play: forward Donta Scott. The sophomore has emerged as one of the Terps’ biggest scoring threats, posting double digits in all but one game this year.

Friday was no exception, with the Philadelphia native leading Maryland’s second-half surge after going scoreless in the first. Scott poured in 15 points in that frame to lead the Terps’ comeback, another glimmering display from the sophomore.

“Our advantage there late was Donta Scott, and he took advantage of it,” Turgeon said.

Scott’s points came in a variety of ways. He knocked down two triples, showing off an improved shooting stroke that has seen him improve his three-point percentage to 53 percent, up from 32 percent last season.

When the three-ball evaded him, Scott used his size and strength to barrel to the rim. That’s how he knotted the game up with just under a minute left in regulation. For much of crunch time, it seemed Maryland’s offensive game plan ran through Scott — especially while functioning in a small-ball lineup without a recognized big man.

It opened up mismatches for Scott — too quick for bigs to defend out on the perimeter, too strong for guards to handle him in the paint. That lineup outscored the Boilermakers 19-14 in the last 7:40 of the game, platforming Maryland’s resurgence.

“With that smaller group, it’s a lot of mismatches,” Wiggins said. “Especially for Donta and Jairus and guys like them.”

That burgeoning faith in Scott was evident in the play which led to Morsell’s free throws. While the ball ended up in Morsell’s hands, it was drawn up for Scott, Ayala said.

“We were trying to get a side screen with Donta and Aaron,” Ayala said. “Just some action to get the mismatch going with Donta.”

Scott nearly lost the ball on his drive, eventually finding Morsell, who drove to the rack with aggression. The free throws — as they had done throughout the night — just didn’t fall.

“We was just trying to get the three,” Ayala said.

The Terps’ last-minute struggles against the Boilermakers were indicative of a team still finding its feet after losing Cowan and Smith, players used to carrying the burden in tight games.

Although the result was disappointing, Turgeon’s playcalls and rotation may have offered a glance into who will be called upon when games are heading down to the wire. It’s a valuable piece of information for a team that is due to take on four ranked opponents in its next five games.

“This is this year’s team, that was last year’s team,” Turgeon said. “I don’t know what lies ahead, the league is so darn good, but I was encouraged with our effort and our toughness tonight.”