Bereft of a star, Maryland men’s basketball is relying on its depth 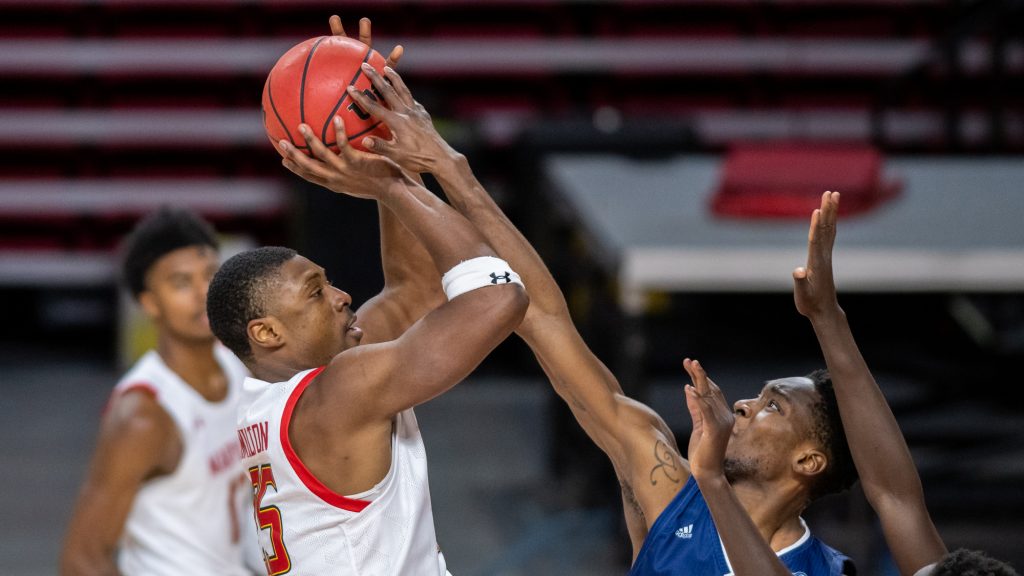 Forward Jairus Hamilton is fouled while taking a shot during Maryland's 90-57 win over Saint Peter's at Xfinity Center on Dec. 4, 2020. (Joe Ryan/The Diamondback)

Nearly one year ago, Anthony Cowan and Jalen Smith were together, wrapped in an embrace as a cascade of red and gold bobbed in the background. It was Dec. 7, 2019 and Maryland men’s basketball was locked in a close battle with Illinois.

It was a slow burn. Neither side cracked the 40 percent shooting plateau. Still, with the clock ticking and the game tied, Cowan had the ball. The then-senior stripped Illini guard Andres Feliz and snagged the ball, before drawing a foul to send him to the free throw line with a chance to win the game.

And in the lead-up to that free throw, Cowan and Smith were there, two stars soaking in the frenzied atmosphere surrounding them.

The Terps have long been a star-driven side. Whether it was Cowan, Smith, Bruno Fernando or Melo Trimble, Maryland has often gone as far as its stars can take it. However, with six players averaging at least nine points per game so far, this year’s squad feels different.

The Terps rank in the top 15 in KenPom’s rating for adjusted offensive efficiency, averaging 110.2 points per 100 possessions. The counting numbers paint a similar picture, with Maryland placing in the top 10 in field goal percentage, with 55.98 percent.

Much of this efficiency comes down to the even distribution of points across Turgeon’s squad. Seven different players have posted double-digit scoring tallies, led by Eric Ayala’s 15.3 point per game scoring average.

The points have come in a variety of ways. Hakim Hart, Jairus Hamilton and Donta Scott are all shooting 50 percent or better from deep. Ayala is not far behind, hitting threes at a 42 percent clip.

Ayala, Hart, Hamilton and Darryl Morsell are also all shooting above 80 percent from the charity stripe.

That consistency has made things that much easier for Maryland’s playmakers. Whether it be Ayala, Aaron Wiggins or Morsell, there seems to be more space to work with, allowing them to better create scoring chances for themselves — and others.

“It’s fun to go out there and have many different weapons to play with,” Ayala said. “It makes it hard for teams to scout us because you never know who really gonna go off.”

The threat of the unknown was on full display Friday, as Hart and Scott torched Saint Peter’s defense to the tune of 46 points on 15-17 shooting.

The two Philadelphia natives have been the embodiment of Maryland’s well-roundedness, coming into their own during their sophomore seasons in College Park. The Terps have leaned on Scott as a shotmaker and creator, with Turgeon slotting him both inside the paint and at the three-point line.

Hart, on the other hand, has emerged as something of a three-point marksman so far, notching eight threes in the opening four games of the season — four more than he hit in the whole of last season.

The improvement has been noticeable.

“Watching guys like Hakim and Donta grow into their games and find a comfort zone,” Ayala said. “Watching them as freshman last year to now — they’re a big piece to what we do.”

That growth isn’t limited to underclassmen, though. Newcomers Hamilton and Galin Smith racked up over 140 combined games of action at Boston College and Alabama, respectively. Yet, since arriving in College Park, both have made a jump, posting scoring and efficiency numbers that far exceed their career averages.

Smith attributes much of that success to Hamilton. In preseason practices, the two would often play on the same team. It helped them build a rapport and partnership that has shined so far.

“I feel real confident when I’m playing with him,” Smith said.

With a matchup against a stout Clemson team looming and Big Ten play on the horizon, the Terps are hoping to keep the ball moving and continue to create space for open shots. Turgeon expects Maryland’s efficiency and scoring totals to drop off in the coming weeks — a natural reaction to the physicality of conference play.

However, if the Terps can keep everyone involved in the offense, they pose an interesting threat. It’s hard to guard when all five players on the floor can fill it up.

And although Maryland may lack that true star in Cowan and Smith, this year’s iteration offers something that has long evaded Turgeon’s past teams: depth.

“We have a lot of really good players,” Turgeon said. “We have seven starters on our roster this year.”