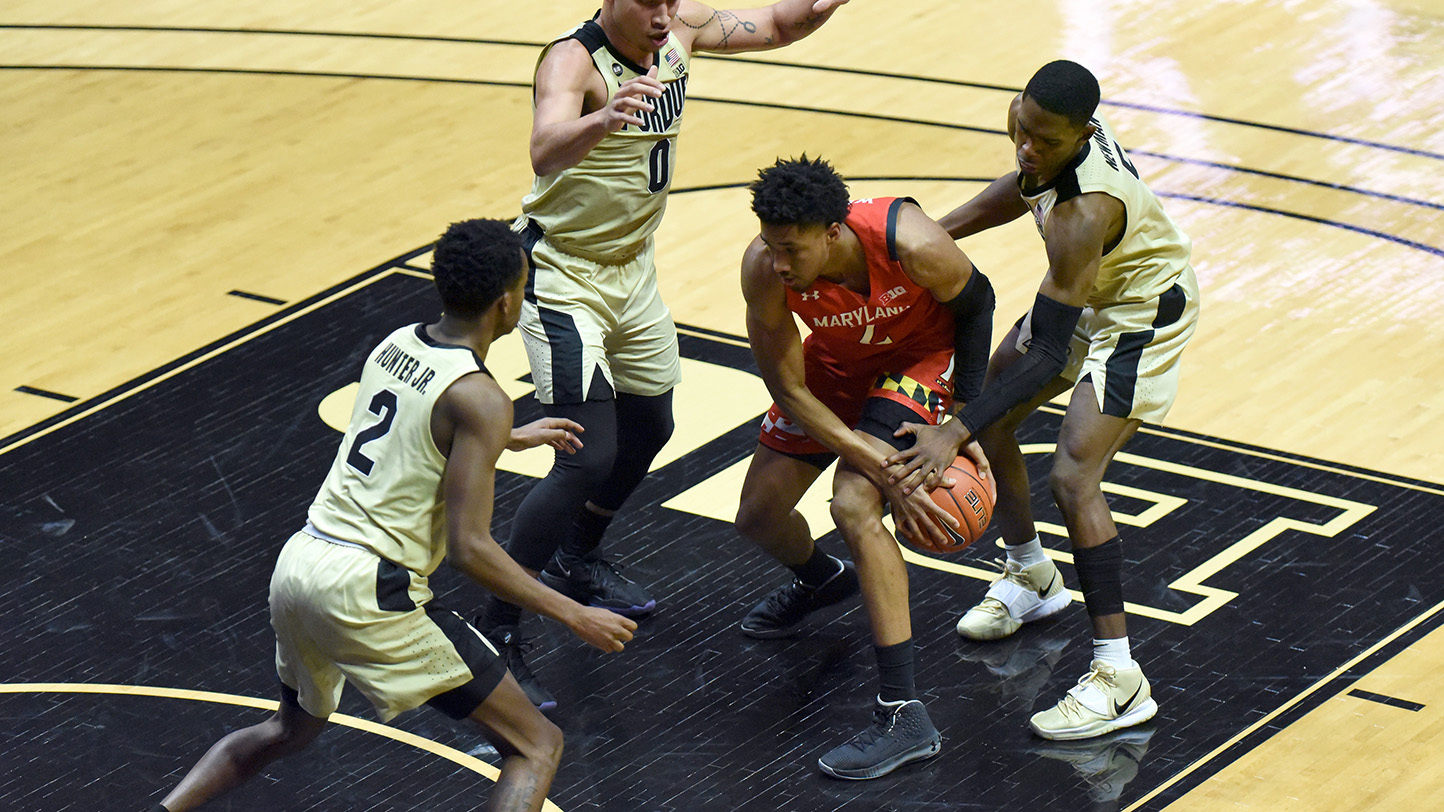 It had been a theme throughout the day. Maryland men’s basketball’s inconsistency at the free-throw line proved fatalistic in the first half — the Terps hit just two of their 10 attempts, platforming a sizable Purdue halftime lead.

And although Maryland had cut that halftime lead to just two, it always seemed likely that those free throw wobbles would rear their ugly head. When Darryl Morsell stepped to the line with a chance to tie the game up with 19 seconds left, they did.

“We always felt like we were going to win,” coach Mark Turgeon said. “We just couldn’t get over the hump at the very end.”

Although the La Salle game offered a brief respite from Big Ten play, the issues that muddied Maryland’s earlier performances against Rutgers and Clemson revealed themselves once again on Friday.

The Terps’ offense looked stagnant out of the gate, missing four of its first five shots. Eric Ayala knocked down a confident three to break Turgeon’s squad out of its funk.

On the other side of the court, though, early signs were promising. Trevion Williams got caught in foul trouble early, forced to sit just 5:25 into the first half. Meanwhile, the 7-foot-4 Zach Edey’s influence was largely contained in the early parts of the game. Chol Marial, who has flitted between brilliance and mediocrity at times this season, was stout for large portions of the first half.

The jitters and lack of composure that has defined much of his season so far mostly washed away, with Marial using his length and leap to give Edey fits. Edey notched six points on 2-of-6 shooting in the first half, a far cry from the 66.7 percent season average he brought into Friday’s game.

“I was so happy for him. He’s been improving over time so much,” guard Aaron Wiggins said. “We needed him to be in there to battle, to rebound, to block shots. He showed that he could battle with them.”

But with the paint proving largely impotent, Purdue looked for the three ball. It was the right choice. Eric Hunter Jr., Jaden Ivey, Mason Gillis and Isaiah Thompson all slotted from beyond the arc, part of a 7-for-13 three-point showing that kept the Terps at bay.

“When a team is hitting shots the way that they did, it’s hard,” Wiggins said. “You’re trying your best. We’re switching. We played according to our scouting plan but they made contested threes, contested twos. … It’s tough when you have a team who can’t miss.”

Meanwhile, Maryland’s offense sputtered. The free throw misses were pronounced, and despite a slight scoring flurry from the Terps in the last two minutes, it was the Boilermakers who held the advantage come halftime, 41-28.

Yet, for all of Maryland’s struggles in the opening 20 minutes, it was always just a few good possessions away from clawing back in contention. And with a zone press that had shown signs of effectiveness throughout the first half, Turgeon’s squad had a platform to climb itself back into the game.

“We were confident that we could win the game,” Ayala said. “It was just a matter of going on a run.”

The Terps kept plugging away. Wiggins slammed home a two-handed jam off a Scott steal. A minute later, it was Morsell’s turn, flashing to the rim to notch a layup on the fast break.

And as Maryland found more success getting to the rack, outside shots got that much more open. Guard Reese Mona has long been a spark plug, a constant nuisance to opposition ballhandlers.

But on Friday, he showed off his range, cashing a three-pointer to pull the Terps within six. Forward Jairus Hamilton doubled that mark a few possessions later, rising up to splash a triple of his own.

Then, he did it again, knocking down a stepback three to cut Purdue’s advantage to one — and set the stage for a barnstorming finish.

The Boilermakers would soon re-establish control, building another nine-point edge. But Scott, a periphery figure in the first, came to life in the second, igniting another furious Maryland rally.

“Our advantage there late was Donta Scott,” Turgeon said.

It started with a three: Scott knocked one home after recovering an offensive rebound — his first points of the day.

He followed that up with a straightaway jumper three minutes later. And the sophomore would slot it home once more, driving in the paint before hitting an acrobatic floater through contact to secure the and-one.

“He had the mismatch,” Ayala said. “They had bigger guys guarding him and he got it going in the second half.”

That dropped Purdue’s lead to one, and while the Boilermakers pushed back, Scott kept going. Another pull-up jumper and a pair of free throws closed it to two, and with just under one minute left, Scott laid one in to tie the contest for the first time since the game’s opening seconds.

But that was as close to a lead as the Terps’ would come. Hunter made a layup on the other end, and Morsell’s two key misses from the charity stripe sealed Maryland’s fate.