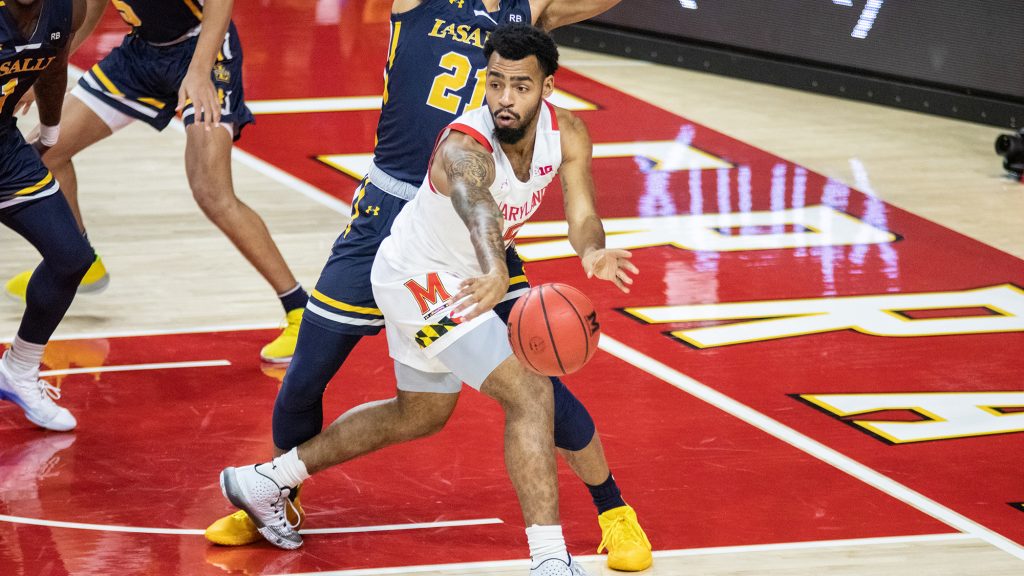 Hakim Hart caught an easy pass in the corner with a little over three minutes left in Maryland men’s basketball’s game against La Salle and wasted no time putting up a three-pointer. Hart’s shot bounced off the front of the rim to the far side, where his teammate and fellow Philadelphia native Donta Scott was timing his jump.

Scott leaped and threw it right back down for two.

Scott’s putback accounted for two of the Terps’ season-high 44 points in the paint.
In a game where Maryland lost the three-point battle, it dominated down low. And it was all the more impressive as it largely played without 6-foot-9 forward Galin Smith, who saw just nine minutes of action due to foul trouble.

Though their lead wavered at times, the Terps never trailed the Explorers, scoring efficiently inside en route to an 84-71 win Tuesday night in College Park.

“I thought we played really well tonight. I thought we had great energy,” coach Mark Turgeon said. “We did a lot of good things tonight, and you gotta give them credit. I thought they were really good too.”

Maryland jumped out to a quick 10-5 lead, with the scoring spread across four of Turgeon’s starters. And it kept going. Buckets from range were hard to come by, but the Terps found ways to score. They kept adding on, establishing an 11-point lead eight minutes into the half.

“We picked up our defense, Scott said, “and once we did that, it wasn’t too hard for our offense to get started.”

But Maryland couldn’t pull away. Turgeon’s squad went without a bucket for over four minutes, and La Salle crawled back within five. But that’s as close as it got in the first.

An intercepted pass and a two-handed dunk by Aaron Wiggins shifted the momentum towards the Terps with two-and-a-half minutes remaining. Maryland finished the period on a 10-0 run, capped by a floater from Scott one second before the buzzer. It was just the second time this season Maryland had taken a 15-plus point lead into halftime.

“We had great energy and we kept it,” Turgeon said. “We were a little bit rusty, but I thought the last five minutes of the first half, we were as good as we’ve been all year on defense.”

Though the Terps spread the scoring, Boston College transfer Jairus Hamilton stood out. He knocked in two of the Terps four 3-pointers in the first half, and tallied a team-high 10 points in the frame.

The Terps came into the game shooting 37 percent from behind the 3-point line, a mark that worsened on Tuesday night. They finished the evening 7-of-28 from three. Still, Maryland was more efficient inside the arc. Eric Ayala, leading the team with a career-high 23 points, got to the line and knocked down 13 of his 15 attempts.

“It was easy for me to get to the line and make free throws,” Ayala said. “Those free throws, not just mine, but as a team, we count on those. We practice those a lot and they’re big for us.”

La Salle stuck around for the first 10 minutes of the period, keeping it within a 10-point contest. But as the clock wound down, the Terps’ offense came alive. Ayala sealed the deal with three minutes remaining, sinking two foul shots to extend Maryland’s lead beyond 15, an unassailable threshold.

And despite some struggles, Maryland did enough on the night. Though their long range shooting disappointed, and they failed to pull away until late on, the Terps’ rebounding and inside scoring was sufficient to seal a non-conference win.