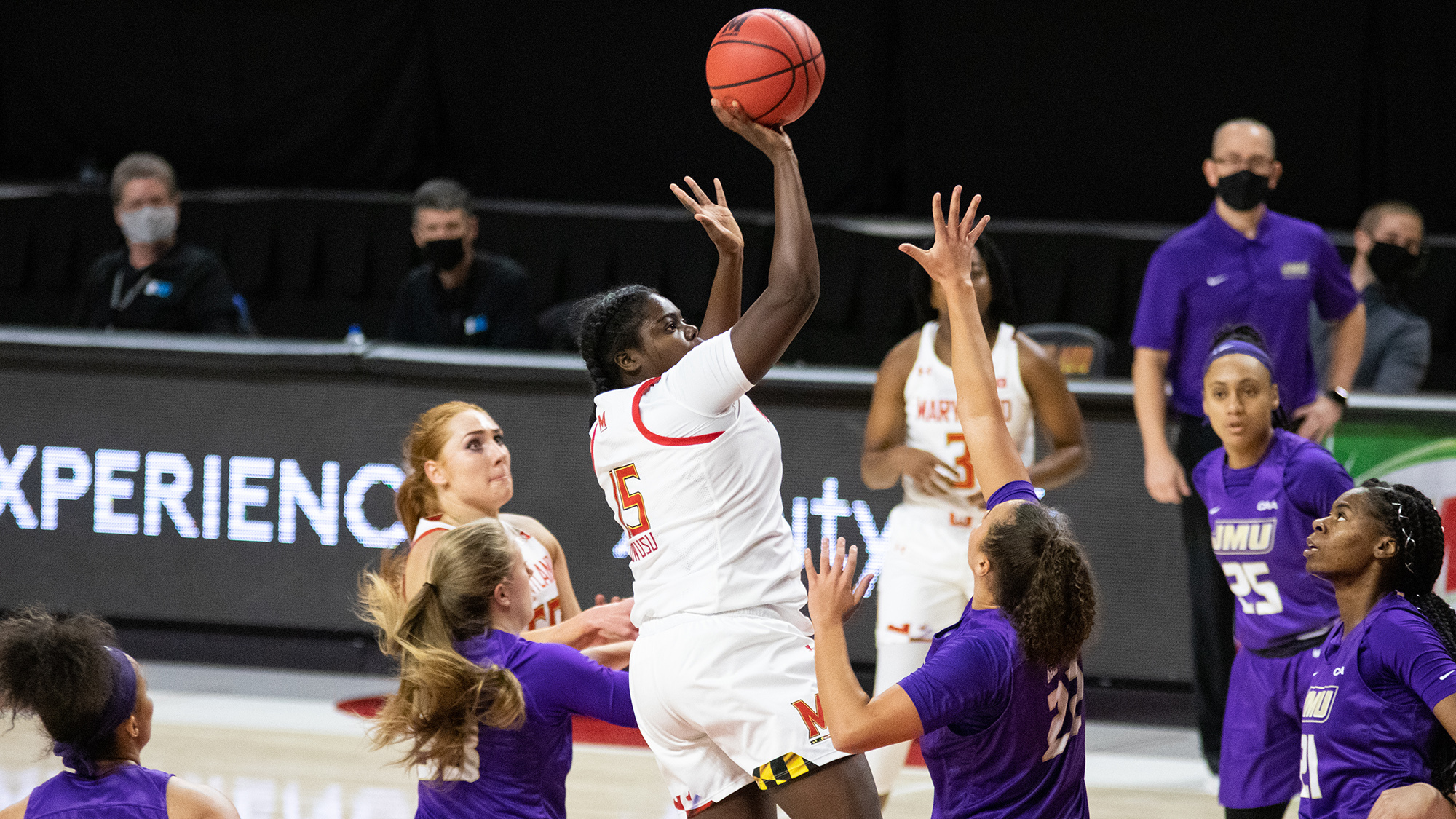 Ashley Owusu rises for a shot during Maryland’s 101-59 win over James Madison on Dec. 19, 2020, at the Xfinity Center. (Julia Nikhinson/The Diamondback)

Maryland women’s basketball struggled to get its offense rolling against James Madison in the first quarter. Shot after shot was either just a bit short or rattled around the rim before dismally falling into the waiting hands of a Dukes defender.

But the tandem of Chloe Bibby and Ashley Owusu had an answer.

The duo came out blazing in the second quarter, building a lead too much for James Madison to mitigate. And that gave the No. 14 Terps a 101-59 victory in their final non-conference matchup.

“JMU came out with a great first punch,” coach Brenda Frese said. “I loved our response, I thought it was terrific.”

[With a slim rotation, Maryland women’s basketball is trying to conserve energy]

After last season’s nail-biter against the Dukes — a game in which Owusu had to sink a game-winning shot after the team erased a 19-point deficit — Maryland wanted to avoid another slow start.

Three baskets from Owusu and two assists from Bibby got the Terps started, but the team struggled to match a strong run toward the end of the first quarter by the Dukes, who hit five straight shots to keep things close.

But from that point, it was Maryland all the way.

Bibby began to dominate the paint for the Terps, dishing out aggressive runs to the basket, often ending with an extra free throw for her troubles. The first drive out of the break saw Bibby body her way toward the basket before finishing a layup over the head of her defender.

Owusu helped bolster an 11-0 Maryland run with an elegant one-handed finish from just inside the paint. She finished the game with a team-high 19 points, and the Terps led 45-27 at the break.

Out of the half, it was a question of which version of Maryland would pick up gameplay. The Terps quickly showed they were not taking their foot off the gas pedal.

“We have a tendency to come out from halftime and come back slow in the third, so we wanted to focus in on that,” Faith Masonius said. “It’s within ourselves.”

Diamond Miller began controlling the paint with four layups in the quarter. She had been silent through the first half after picking up early fouls, relying on Bibby and Owusu to set the pace for scoring.

“We challenged her at halftime,” Frese said. “She had a terrific response out of foul trouble to not have it impact her second half.”

Meanwhile, Katie Benzan did what she has done so often this season — firing from behind the arc. The graduate transfer from Harvard missed her first handful of attempts, but once those baskets started dropping, it was tough to stop her without leaving an easy bucket for Maryland.

The Terps were able to go deep into their bench late in the game as they amassed their lead. Zoe Young, a redshirt freshman who missed last season with an ACL injury, made her first appearance and scored her first bucket for Maryland. Brenda Frese’s squad cruised through the fourth quarter, amassing a 42-point lead by the time the buzzer sounded.

With that noise came a sense of relief — a far easier contest than last year’s difficult win, and another opportunity to find something resembling a rhythm over what projects to be a challenging few months.