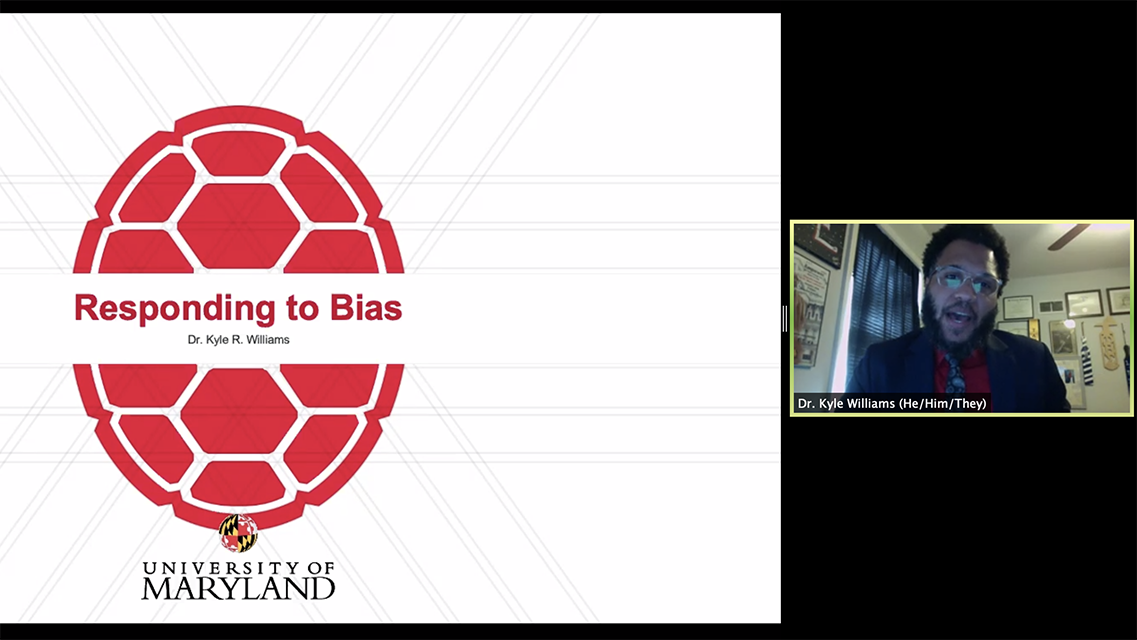 During his presentation Thursday afternoon, Kyle Williams, the third finalist for the Office of Diversity and Inclusion’s Director of Bias Incident Support Services at the University of Maryland, stressed the weight of words.

“When we think about the other aspect of ‘words only have power if you give it to them,’ that’s a wrong statement,” Williams said at the panel. “Words do have power.”

That is why, he said, it’s paramount to define and describe key terms. During the presentation, Williams defined concepts such as intersectionality, monoliths, biases and microaggressions, also outlining the theory of marginality and mattering.

If selected, Williams added he would elevate the voices of Black, Indigenous and people of color, international students and members of the LGBTQ community.

He wants to incorporate “trauma-informed and restorative practices” into community service work on the campus so it’s not only counseling offices that are prepared to deal with traumatic incidents, but other community services as well.

“Sometimes that means looking within our offices, and seeing where students aren’t being met,” Williams said. “And how we can continue to support them to create an environment that will help them matriculate, and then move forward.”

Williams spoke specifically about how he would promote reform with the University of Maryland Police.

As the assistant director of student conduct and community standards at the Washington University of St. Louis, Williams said he helped Black students when they challenged the administration on methods of police training.

He also acted as the chair of the Equity and Inclusion Committee in the Association for Student Conduct Administration, where he and his peers have incorporated more equity and inclusive practices into their profession within student conduct — such partnering with police so they could be a resource, Williams said.

A lot of the process is about unlearning past procedures that have proved harmful at institutions below the surface, he explained.

“There’s a lot of work that still needs to be done with institutions of higher education as well as to think about what is actually underneath the water,” Williams said.

At a listening session on Dec. 3, students at this university expressed safety concerns and spoke about their negative experiences with University Police, providing recommendations for how the department can improve relations with students.

When asked how he would encourage this relationship when students may be uncomfortable with police involved in bias incidents, Williams called for a “better job of supporting all of our entities,” but also added that police officers are necessary for keeping the campus safe.

That said, there would have to be reform in the training for bias incidents, Williams continued. For example, he said police officers might not need to be in full uniform if they are dealing with a mental health issue. For this, he stressed the need for trauma-informed practices and bias training that would show the police are there to help, not harm.

“It would really be looking at assessing, but also providing training on what biases are, and then talking about and collaborating over their national associations on how we’re doing the work, so that when they show up, they are seen as a resource and not a threat,” he said.

Williams stressed that if he were to take the role, he would be sure to keep four main questions of the restorative justice model in mind: what happened, who’s been impacted, what has occurred since the incident and what can be done to make things right.

Though he admitted the last question — how to make things right — might be the hardest one to answer, it’s a challenge he says he is ready to tackle.

“If I came into this position, those are the things that I will constantly think about,” he said. “How we serve not only our students, but also how we serve our greater community.”