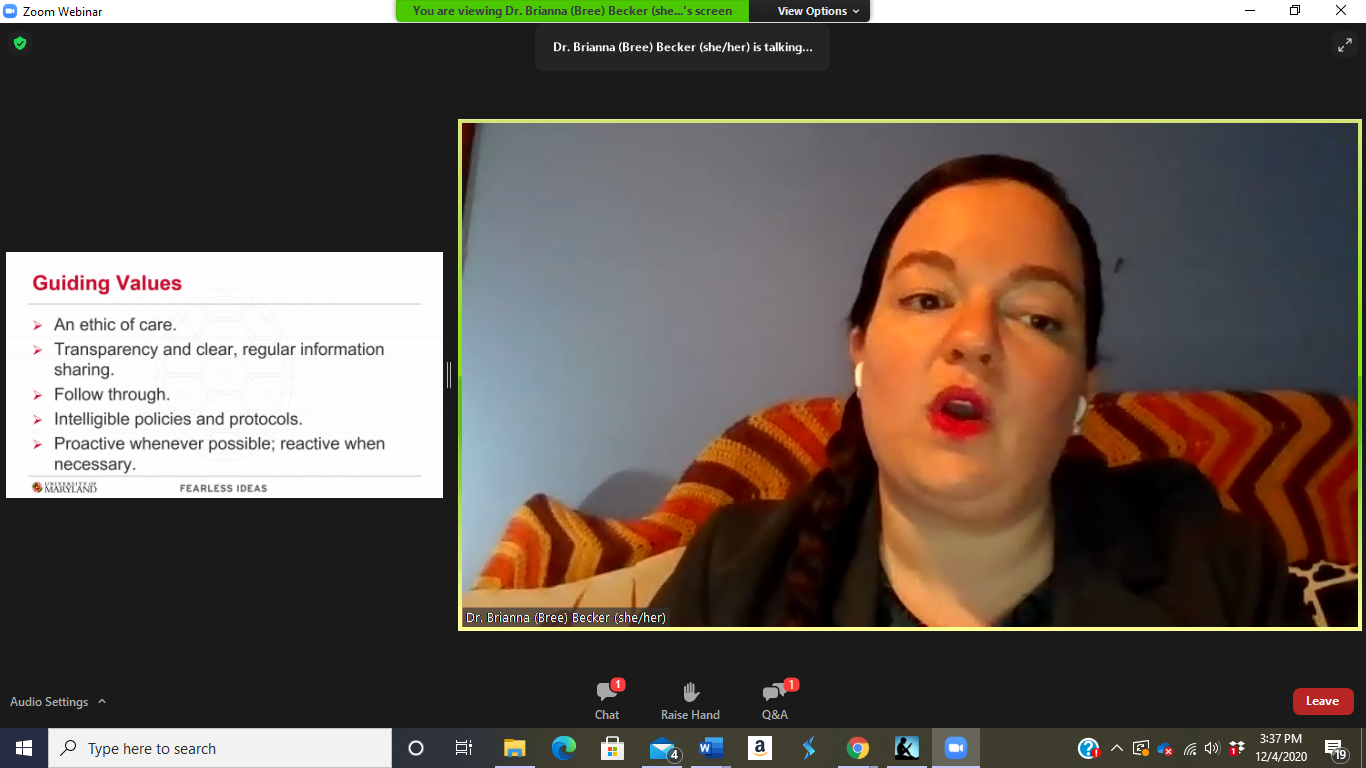 Brianna Becker, a finalist for the Bias Incident Support Services' director position, speaks with the UMD community via Zoom. (Emily Williams/For The Diamondback)

The University of Maryland’s Office of Diversity and Inclusion moved forward in garnering feedback for the next director of its Bias Incident Support Services unit on Friday, introducing students, faculty and staff to the second finalist for the position.

Following Thursday’s presentation with Binley Taylor, the first of four candidates to speak with community members, Brianna Becker detailed how she would handle bias incidents by using a “before, during and after” method that would emphasize collaboration between individuals and university departments.

The “before” aspect of her strategy would include promoting proactive measures to prevent bias incidents from happening in the first place, such as creating training sessions for faculty on topics such as implicit bias, cultural competence and mediation skills, Becker said. If an incident occurred, however, she said she would ensure the safety of the targeted individual.

And after an incident took place, Becker said she would focus on healing and education, offering ongoing support for individuals and the community at large.

When asked how she would advocate for marginalized populations within predominantly white settings, Becker described how she’s previously engaged with faculty members in the sciences who saw equity and inclusion as something separate from their work in their fields and thus irrelevant.

But when she spoke with them about how their fields — and oftentimes their labs — overwhelmingly consist of white men, she said she saw conversations become “productive” and “mind-changing.”

“I find that sometimes, though it feels even a little bit mercenary, that interest convergence will often bring folks in who didn’t necessarily see this as valuable to themselves,” she said. “As they see it as valuable to their work, then they can sort of see that value.”

During her time at these institutions, Becker said she was involved in responding to hate bias incidents.

In response to a request for an example of how she’s previously handled such incidents, Becker recalled an incident that occurred when she was working for a university’s resident life and housing office: using the student directory, a student’s ex-boyfriend found that student’s address and attacked her.

Becker said the university ultimately failed that student, having not established a procedure for handling the trauma that can follow domestic violence incidents.

“I tried to give her trauma-informed support in an environment that wasn’t yet even thinking about that paradigm,” she said.

That’s part of the reason why she says setting the framework for responding to incidents before they occur is so important, and why she emphasizes that procedures and policies in place for mitigating bias incidents should be expanded to departments across the campus.

Becker also discussed the need for procedures to handle incidents that have occurred online. According to data from her presentation, the number of online bias incidents has increased dramatically since the university moved classes online last March.

While she acknowledged she is unfamiliar with this university, Becker said she would treat those who come to her as the experts of their experiences.

“If I’m chosen for this role, I’ll become an expert on your institution,” Becker said. “But right now, I’m an outsider looking to join your community.”