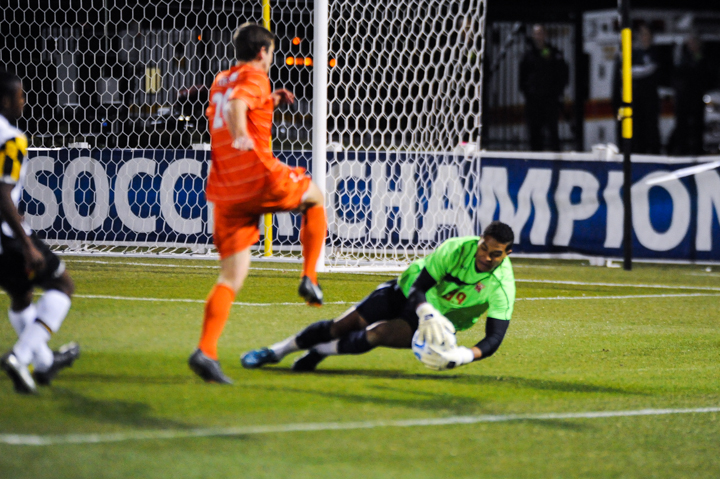 Keeper Zack Steffen lays out to gather a headed pass from a teammate and prevent an easy Clemson goal during the Terps match against Clemson on Nov 15, 2013 at Maryland Soccer Plex.

With Manchester City needing one point from its final Champions League Group C match to clinch qualification to the knockout round as a top seed, the Premier League side turned to former Maryland goalie Zack Steffen.

While Steffen normally operates as the backup option for Manchester City, manager Pep Guardiola opted to rotate the first team a little, giving Steffen the nod ahead of Ederson. City were facing off against Marseille at home, having won the reverse fixture 3-0 in October.

City would achieve the same result again, beating the French side 3-0, with Steffen keeping a clean sheet between the sticks. Steffen faced eight shots, two of which were on target, making two saves. Steffen also completed 90 percent of his attempted passes, a statistic that is held near and dear to manager Pep Guardiola’s heart.

Steffen’s appearance in the Champions League marked him as the second-ever Terp to play in the competition, with Maurice Edu being the first during his time with Scottish club Rangers.

This was just Steffen’s third appearance for Manchester City, with the other two being in the Carabao Cup. This was the former Terp’s second clean sheet of the season, with the other coming in a 2-0 win over Burnley in September.