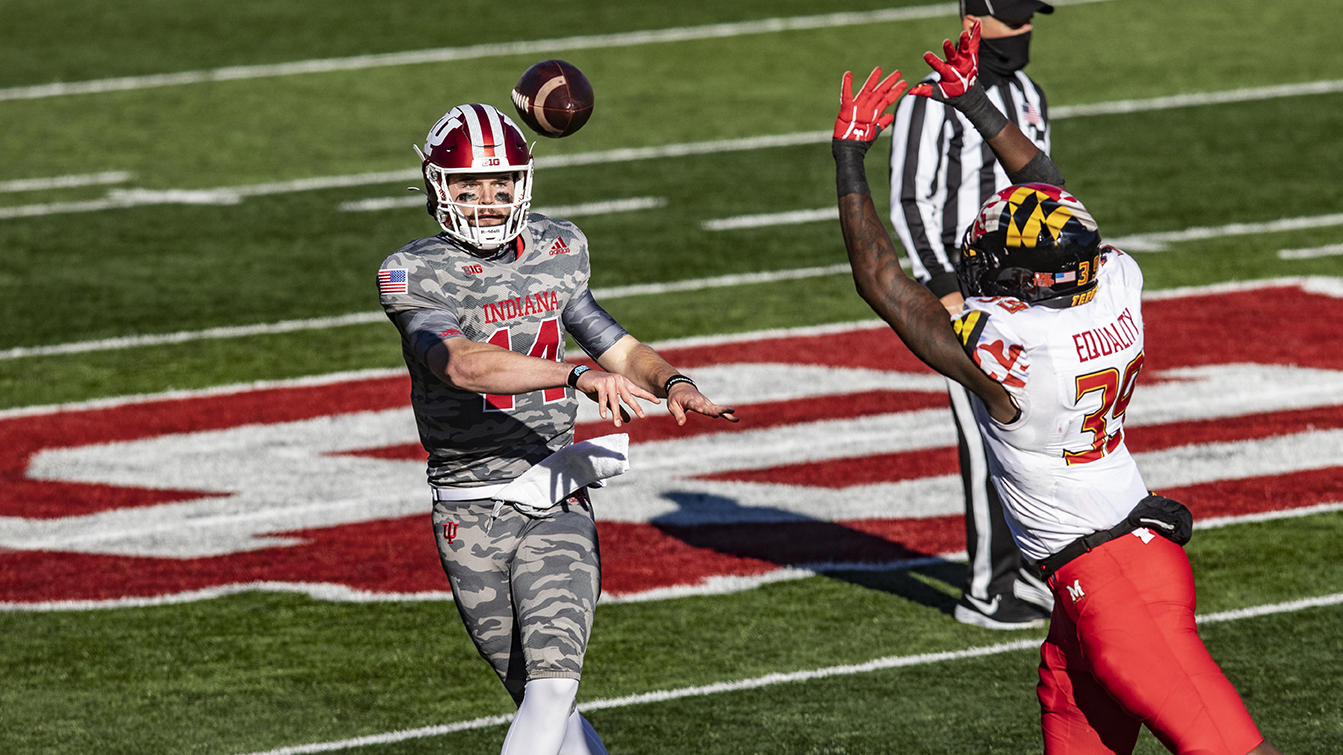 Indiana quarterback Jack Tuttle throws the ball in the third quarter on Nov. 28, 2020, at Memorial Stadium. Tuttle entered for Michael Penix Jr. after he was injured. (Alexandra Deryn/Indiana Daily Student)

Maryland football’s offense had a chance to turn its game around. Down four nearly halfway through the third quarter of Saturday afternoon’s contest, the defense had just made a red zone stand against Indiana. Though they were backed up, the Terps had the momentum.

But in just four seconds, it slipped away. Taulia Tagovailoa took the snap, faked a handoff to Peny Boone and rolled to his right. The next thing he saw was a charging D.K. Bonhomme barreling toward him. The Hoosier defender read the option play perfectly and planted Tagovailoa in the end zone for a safety, sparking a run of three consecutive scoring drives that helped No. 12 Indiana (5-1) pull away from Maryland in the second half of Saturday’s 27-11 contest.

For Tagovailoa and the Terps’ offense, the play encapsulated the afternoon. Poor decision-making plagued a previously powerful offense from making big plays, while it was evident that the three-week gap between games and shorthanded attack hurt the squad as well.

“It was just me trying to do too much again,” Tagovailoa said. “I missed a lot of throws that I wish I could get back.”

It was reminiscent of the sophomore’s struggles in his first start against Northwestern, in which he threw three interceptions and made several off-target throws to open receivers. Those games will likely be part of the learning curve as Tagovailoa grows more comfortable facing stout, aggressive defenses.

But unlike the opener against the Wildcats, Tagovailoa had a depleted arsenal due to COVID-19 protocols. Starting running back Jake Funk sat out, along with starting offensive linemen Johnny Jordan and Marcus Minor, plus receivers Rakim Jarrett and Jeshaun Jones.

Their replacements were serviceable, but could not provide the explosive spark or strong blocking needed to assist Tagovailoa. Still, the team is not making excuses for its mistakes.

“It was tough, but at the end of the day, it’s next man up,” defensive back Antwaine Richardson said. “That’s the mentality that everybody has to have.”

Tagovailoa and head coach Mike Locksley took much of the blame after the contest for the offensive struggles. The signal-caller finished the day with 241 passing yards and one touchdown while tossing three picks and getting sacked three times.

Early on, it looked as if the offense would pick up where it left off before Maryland halted activities, with Tagovailoa marching the Terps (2-2) deep into Indiana territory on several drives. But the penalties, incompletions and turnovers added up, and most of those possessions ended with a goose egg on the board for Locksley’s squad.

“[We did] a lot of uncharacteristic things we hadn’t shown on offense the last few games,” Locksley said. “Hopefully they’re all correctable mistakes.”

Despite its offensive woes, the team’s previously shaky defense looked solid for much of the afternoon, preventing a prolific Hoosier aerial attack from getting off the ground. Maryland eventually cracked late as fatigue began to set in, but it still presented a positive takeaway from a game with few highlights.

And that’s the embodiment of this unusual season. Locksley’s young squad will need strong performances from unexpected sources as it presses into the home stretch of its schedule.

But perhaps most crucially, the Terps will have to limit the self-inflicted errors that hurt them against Indiana. That could be the difference between winning out and languishing in Big Ten mediocrity.

“We gave ourselves a chance in the first half on defense and on special teams. On offense, we kind of kept starting and stopping,” Locksley said. “It’ll be nice, hopefully, to get back into a normal routine.”