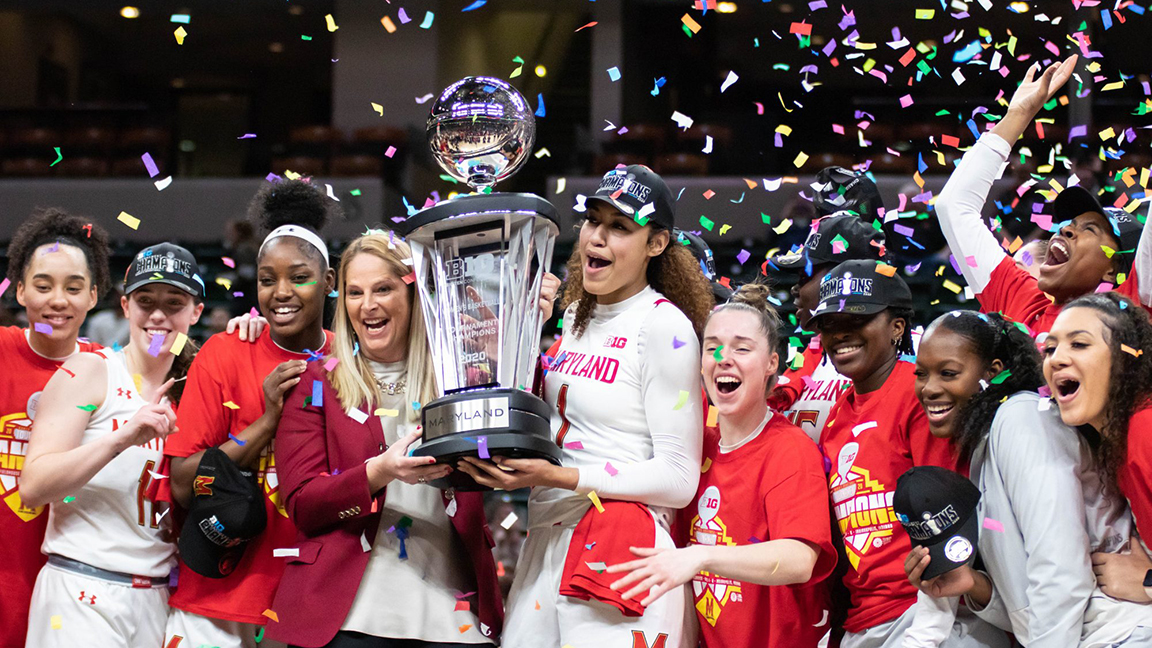 As confetti billowed around Bankers Life Fieldhouse in Indianapolis on March 8, all coach Brenda Frese could do was smile: Maryland women’s basketball had secured its Big Ten title, the program’s first in three seasons.

For a program of Maryland’s prowess, three years is an eternity. And even in the midst of those frenzied celebrations, that sense of relief was tangible.

“I’m glad we finally won it,” then-senior Kaila Charles said. “I’ve been here four years and we lost the last two, and it hurt.”

Expectations are heightened in College Park. And though the Terps are expected to compete atop the Big Ten this season, Frese and her staff are working to ensure Maryland’s recruiting pipeline continues to pay dividends in 2021 and 2022.

Frese’s squad has already secured high-profile commitments in its 2021 class. Four-star guard Shyanne Sellers announced her intention to join the Terps back in April. The No. 22 prospect in her class, per ESPN, the 6-foot Sellers looks poised to bring length and versatility to a Maryland backcourt already teeming with talent.

The Terps are also slated to bring in vaunted Swiss prospect Emma Chardon, who committed in June. Chardon, a 6-foot-3 forward from Geneva, has impressed at Geneve Basket in Switzerland’s SB League, notching 11.8 points and 7.9 rebounds per game on 65.5 percent shooting last season.

Chardon has also excelled at the international level, dominating the FIBA’s U16 Women’s European Championship two years ago. Chardon averaged 18.4 points and 11.3 rebounds per game in the tournament, including a 30-point, 12-rebound display against Kosovo and a 25-point, 14-rebound showing against Romania.

Meanwhile, Frese’s 2022 class is coming together, albeit at a slower pace. In July, Mila Reynolds pledged to join the program — Maryland’s first 2022 piece. Reynolds, a 6-foot-2 guard, is the No. 32 player in her class, per ESPN. And though Reynolds has some ways to go before making her bow for the Terps, her commitment serves as another reminder of Frese’s dedication to bringing long, dynamic talents to College Park.

As well as bringing young stars into Maryland, Frese has helped turn top college players into bonafide WNBA talent over the course of her nearly 20-year career with the Terps.

Charles was the latest Maryland star to make the leap — the Connecticut Sun selected her with the No. 23 pick in this summer’s WNBA draft. She joined the likes of Kristi Toliver, Alyssa Thomas and Brionna Jones as former Terps who have made their presence felt in the pros.

Maryland will look to keep that tradition alive. Chloe Bibby, a 6-foot-1 forward who recently transferred from Mississippi State, impressed during her three seasons in Starkville. As a sophomore, Bibby notched 11.9 points and 4.1 rebounds in 18 games before a knee injury derailed her season.

And while her scoring dropped as a junior, the Warracknabeal, Australia, native still finished the season with the second-most rebounds of the Bulldogs (173).

Further down the line, both Angel Reese and Ashley Owusu could make waves as potential WNBA prospects. Owusu impressed as a freshman, capturing the Big Ten tournament’s Most Outstanding Player honor. As for Reese, the Baltimore-based forward/guard was ranked the No. 2 prospect in the country by ESPN.

Regardless, the pipeline that has served Maryland so well during Frese’s tenure is continuing to churn out highly rated recruits. The program looks set to continue competing at the upper echelon of college basketball — a place it has occupied for much of the past 20 years.

And for Frese and the Terps, that’s certainly something to smile about.