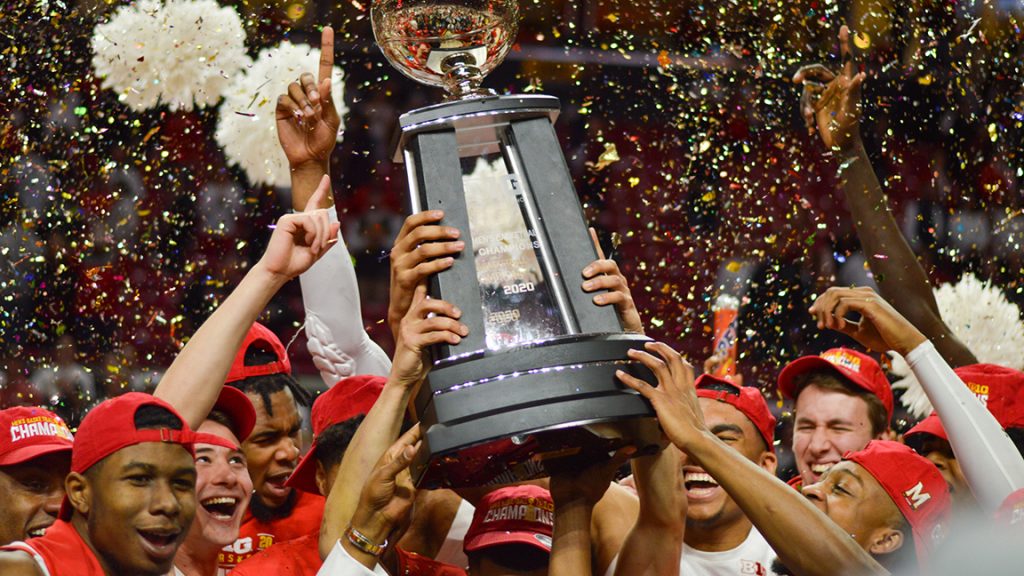 The Maryland men's basketball team celebrates winning a share of the Big 10 title after an 83-70 win over Michigan at Xfinity Center on March 8, 2020. (Joe Ryan/The Diamondback)

With the departures of Anthony Cowan and Jalen Smith, Maryland men’s basketball found itself with two crater-sized voids to fill in its lineup.

It’s proven to be difficult to shore up those positions — point guard and forward — in one offseason. While head coach Mark Turgeon has brought in a handful of fresh faces via recruiting and the transfer portal, growing pains are likely, if not expected, as the Terps look to adjust to losing such stalwarts as Cowan and Smith.

However, with talented recruits poised to join Turgeon’s squad in 2021 and 2022, the Terps are hopeful these growing pains will be short-lived as they aim to replicate their recent success.

It all starts with Julian Reese, a 6-foot-9 forward from St. Frances Academy in Baltimore. The No. 83 ranked player in his class per 247Sports, the four-star will be a helpful addition when he joins the team in 2021, projecting to potentially slot alongside Boston College transfer Jairus Hamilton in the frontcourt.

James Graham, another four-star recruit, will join Reese in Maryland’s 2021 class. He brings size from the wing, standing at 6-foot-8. He caught the eye of numerous programs, receiving offers from Iowa, Michigan State and Wisconsin, but announced his commitment to the Terps in August.

Rounding out Turgeon’s 2021 crop is another four-star prospect, Ike Cornish. The 6-foot-6 guard is the No. 103 player in the nation according to 247Sports. He averaged 13.3 points and 3.6 rebounds per game as a junior at Legacy Early College in Greenville, South Carolina. Cornish received scholarship offers from Georgetown, Xavier and Virginia Tech.

The trio of four-star recruits serves as a vast improvement from Maryland’s thin 2020 class, and reflects a return to normalcy for Turgeon, whose tenure in College Park has featured a number of high-profile classes, including the ones that brought Cowan and Smith in. The class currently ranks No. 19 in the country.

The future also looks bright for Turgeon’s 2022 class, which will welcome four-star guard Paul Lewis. Already a standout at Bishop O’Connell High School in Arlington, Virginia — Melo Trimble’s alma mater — Lewis received an offer from Villanova, among others. While it’ll be hard to match Trimble’s production in College Park, Lewis looks poised to make an instant impact for the Terps come 2022.

While these reflect promise for the future of Maryland men’s basketball, the Terps will need current players to stay competitive in a difficult Big Ten slate. Junior Aaron Wiggins may be shouldering that burden, as he has the skill set and scoring chops to make himself a bonafide NBA prospect — especially given his suspected expanded role in the offense.

The biggest key to Wiggins’ hopes will be dialing in his biggest strength, three-point shooting. As a sophomore, his field goal percentage dropped 10 points, to a modest 31 percent from behind the arch. Maryland will rely more heavily on Wiggins to create his own shots this year, and will need him to knock down shots from behind the arc. He also showed promising athleticism when driving to the rim last season. The Terps need a big season from him to compete, and he needs to improve for a chance to leave school a year early for the NBA.
[Drawing on Baltimore roots, Darryl Morsell is a leader for Maryland men’s basketball]