“Beyond her years”: Angel Reese is bringing a competitive edge to Maryland basketball 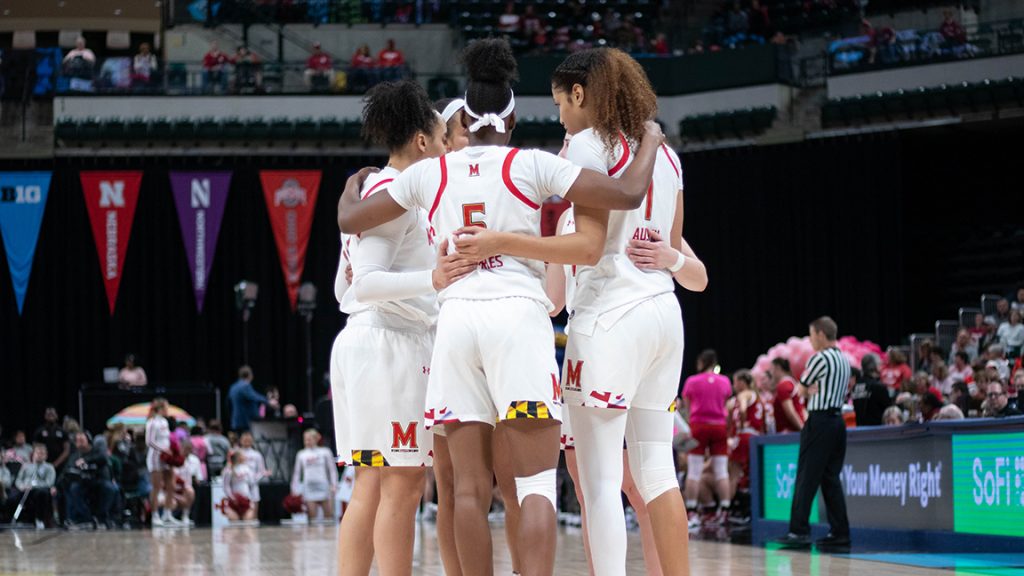 Maryland women’s basketball huddles during its 66-51 win over Indiana on March 7, 2020 at Bankers Life Fieldhouse in Indianapolis. (Julia Nikhinson/The Diamondback)

“My mom would coach, and I would be the only girl on the team … and it was always competitive because no one wanted to lose to a girl,” Reese said. “But I wanted to prove to the boys that I was actually good.”

Years later, Reese left St. Frances Academy in Baltimore as the second-best high school basketball player in the country, according to ESPN.

Now, she’s proving her talent on the practice court as a guard on the Maryland women’s basketball team. She’s the highest-ranked recruit in program history.

“Angel is beyond her years,” said coach Brenda Frese. “The way she takes care of the team and builds up her teammates, you would think she’s a junior by the way she plays and talks.”

Reese’s competitiveness and ability to take control have shone through since her first practice with the Terps.

“It’s expected at this point … if [Reese] doesn’t come out and compete, we’re like, ‘OK, what’s wrong with you, let’s pick you up,’” said guard and Mississippi State transfer Chloe Bibby.

Reese stepped into a leadership role for the Terps right away, a rare feat for a freshman. She uses her knowledge and confidence to speak her mind in practice, and she demands excellence in return. But those insistences have helped her teammates improve, Frese said.

“[If] she sees someone struggling with their shot, the next time they knock down a shot she’s going to celebrate it,” Frese said. “She wants to win so badly that she understands how to breathe life and confidence into her teammates, and you don’t get that from freshmen.”

Competitiveness and support run in Reese’s family. Reese credits her mother, also named Angel, for her fierce ambition and desire to win.

“My mom is a single mom, so she always has been the type to be an independent woman, and she’s taught me to always go out and fight for everything I have,” Reese said.

Reese’s younger brother, Julian, also has basketball in his blood: He signed on to play for the Terps in 2021. Julian stands at a towering six-foot-nine, six inches taller than his sister.

But that does not stop Angel from trying to be the better player. The Reeses grew up playing one-on-one against each other on a basketball court in front of their house. Eventually, they removed the court because they squabbled too much.

Even though they compete against each other, family is incredibly important to the Reese siblings. They both wear no. 10, the same figure their mother used to wear when she played basketball at University of Maryland, Baltimore County.

Reese’s grandparents have come to every one of her games. Their proximity to College Park is a primary reason Reese chose to play for the Terps.

But she also came to College Park to bring a championship back to the state she loves. Reese attended Maryland basketball games throughout her high school career — and the Terps spent years recruiting her. That chance to win at home, in front of her close-knit family, was too good to pass up.

And she plans on making good on that pledge.

“I came to Maryland because I want to win a national championship, especially because I’m from here, I want to bring one back home,” Reese said, “I’ve always had the drive to just win everything, and it doesn’t matter what it is, I just want to win.”