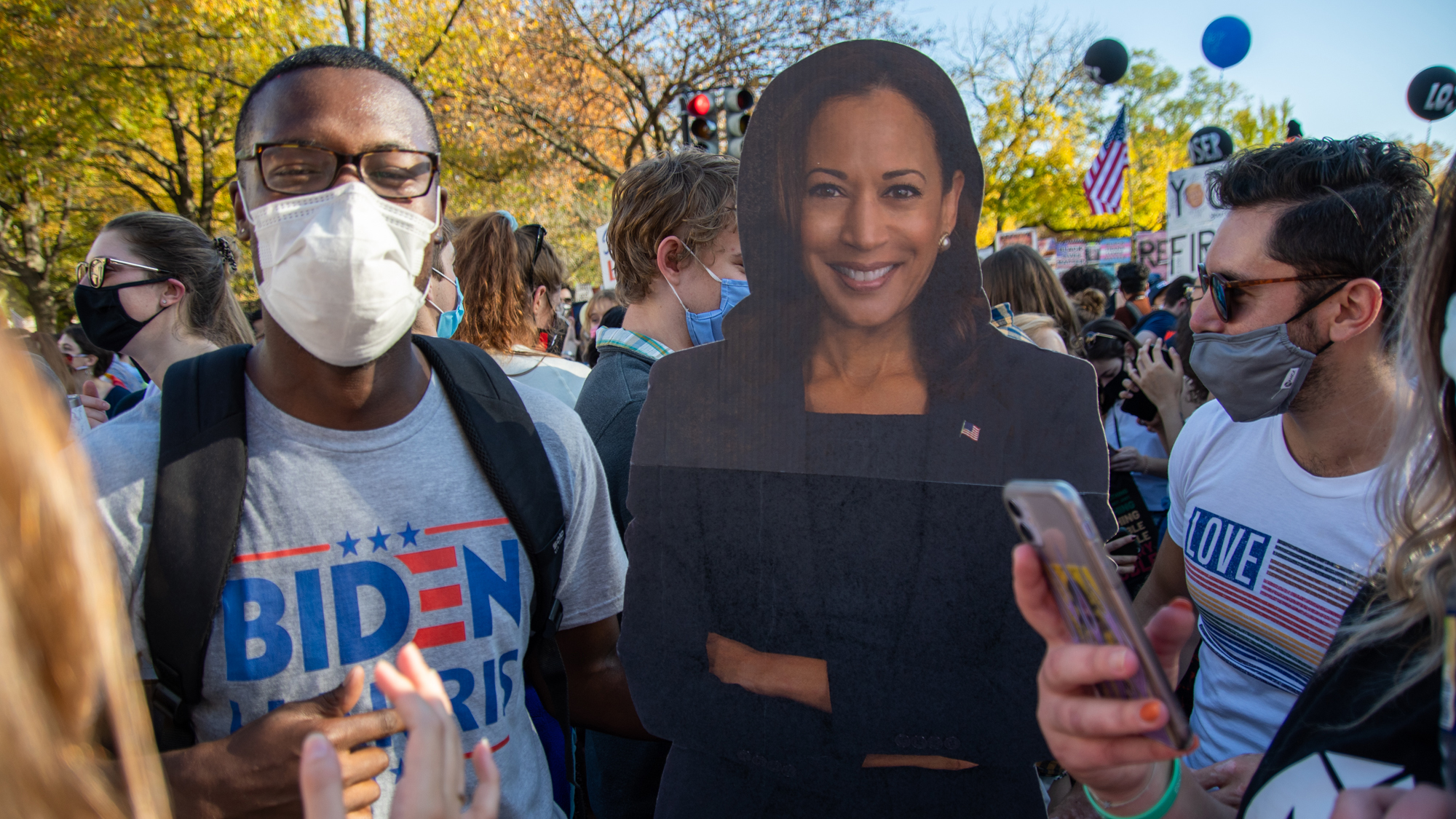 People celebrate with a Kamala Harris cutout in Black Lives Matter Plaza after Joe Biden was projected to become the next president of the United States on Nov. 7, 2020. (Joe Ryan/The Diamondback)

Last Saturday, Kavya Kumaran was doing homework when her mother called out to her sister — by the tone in her voice, Kumaran knew something important must have happened. And it was important: Joe Biden and Kamala Harris had just been projected to win the 2020 election.

Seeing Harris as the vice president-elect of the United States means a lot for Kumaran. Harris represents many firsts — she’s the first woman, first Black person and first South Asian to hold the position. That night, Kumaran “broke down and … cried,” she said.

“To see Kamala Harris win is just — I don’t even know that I can have the words to explain how that feels,” said Kumaran, a senior accounting and management major at this university. “There’s this sort of weight that’s been lifted, and I remember this feeling of really just visceral joy, just unbridled joy pouring out of me when I saw that result.”

During the campaign, Kumaran often became emotional when Harris would mention her mother, who’s from the Indian state Tamil Nadu, where Kumaran’s mother is also from.

“She’s legitimized what the South Asian identity means in a sense — that we belong here,” she said.

Harris’ win represents the multiculturalism and diversity that defines America but is largely absent from political leadership. Last year’s Congress was the most racially and ethnically diverse ever, with 116 non-white representatives who make up 22 percent of Congress, according to Pew Research Center.

But while many students were encouraged by Harris’ election, some were also aware of the implications of her career as a California prosecutor.

Tamya Anderson, a senior criminology and criminal justice major, feels bittersweet about Harris’ victory, she said. Though the two are a part of the same historically Black sorority — Alpha Kappa Alpha — Anderson recognizes how some of Harris’ decisions as a prosecutor also led to the mass incarceration of disadvantaged individuals.

“As a Black woman, coming from an HBCU and being in a position like that … I would have preferred if she would have used that position in a way that wasn’t further contributing to the oppression of her people,” Anderson said.

Still, Anderson feels a sense of pride from seeing someone from her sorority in such a powerful position.

“The vice president is a part of my sorority and also a Black woman and those are things to be excited about,” Anderson said. “She’s also going to be held accountable.”

That’s what other students stressed when discussing their reactions to Biden and Harris’s victory: relief and joy, but also a commitment to hold the administration accountable, especially on issues such as racial justice and the coronavirus pandemic.

Upon hearing the news, Kumaran wanted to go to Washington, D.C., to celebrate alongside others who felt what she did, she said. But fears of contracting the coronavirus and spreading it to her family held her back.

“Trust me, in my heart I wanted to go there and dance, because I just wanted to feel that pulse of humanity,” Kumaran said.

Instead, Kumaran cuddled up on her couch with her mom and sister watching Biden and Harris’ first post-election address. To Kumaran, it was more than just a speech — it brought back feelings of hope and comfort.

“There’s been so much national trauma, so much death, so much sadness, so much suffering, depression, anxiety and just to have this win felt like, ‘Yes, there’s still a long way to go, but take a moment to appreciate this second,’” she said.

[The myth of the “Latino vote,” debunked by three UMD professors]

Other South Asian students were also moved by this year’s election results.

“When she got elected, I think that’s what ran through my head was like ‘OK, we have someone looking out for us now,’” said Juhi Narula, a senior marketing and psychology major.

As the first woman to hold one of the highest political leadership positions in the United States, Harris is breaking down barriers for women of all backgrounds pursuing positions of power, some students said. During her first speech as vice president-elect Saturday night, she acknowledged that though she may be the first woman as vice president, she wouldn’t be the last.

That statement alone resonated with a lot of young girls and women that night, including Narula.

Harris can serve as a role model for others looking to establish themselves in positions of power without having to feel like they don’t belong, Narula said.

Kumaran agreed, adding that as a female in the business world, she too has struggled to establish her authority and legitimacy in spaces where she is the only woman.