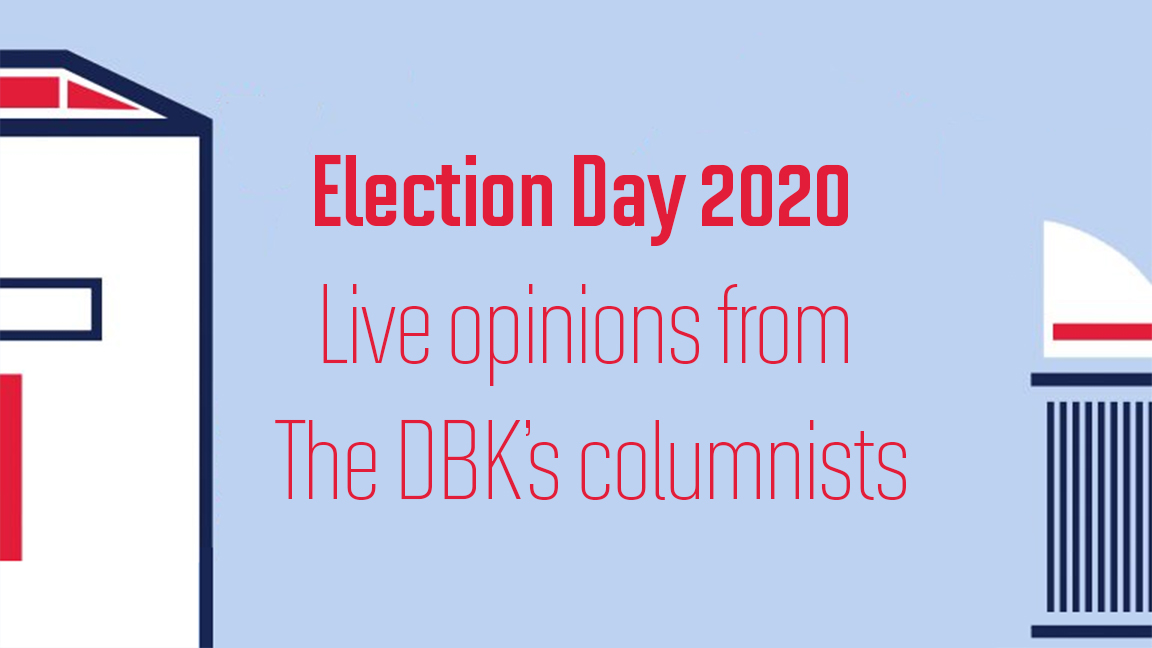 The Diamondback’s opinion columnists provide inexpert political takes during Election Night 2020! All views expressed are those of the columnists.

And with that, the opinion desk is calling it a night. Check out @thedbk for some more updates, and get some sleep.

12:46 a.m.: As we close out Election Night, we know that we’re likely not going to have official results for a while. What’s one thing you’re really, really hoping ends up happening?

Maya: I really, really, really want a blue Texas. Nothing would make me happier (except a Trump loss, obviously). Imagine how BEAUTIFUL it would be: the Lone Star state, one big chunk of bright blue. But if I can’t get that, I’ll settle for a Biden win by any margin.

Josh: I’d love to see Georgia turn blue. It would be a really amazing win for all of the organizers that have worked their asses off over the past few years to change the political climate in the state. I’m just hoping for a better tomorrow.

Malcolm: It doesn’t seem like we’ll know who the president is until the end of the week. I really hope that Democrats have some good lawyers. In more positive news, Oregon has become the first state to decriminalize small amounts of cocaine, heroin, methamphetamine and other drugs, progressives have been winning local races and New Jersey has legalized marijuana.  While the presidency is very much still up for grabs, it’s important to note the successes — and failures — of local races across the country.

12:22 a.m.: Steny Hoyer won reelection for his House seat in Maryland’s 5th Congressional District. What do you think Hoyer’s primary win over McKayla Wilkes and his win tonight mean for the progressive movement in Maryland?

Maya: I don’t live in Steny Hoyer’s district, but I just have to say the huge “Steny Hoyer for Congress” sign on Route 1 is just such a slap in the face to Mckayla Wilkes and all of this students at this university who canvassed their hearts out for her. I just don’t really know what the future of the progressive movement in this state looks like when the only real “progressive” federal official we have is Rep. Jamie Raskin. I think Maryland’s progressive movement needs to be better coordinated, because at the moment, it’s simply too disjointed.

12:00 a.m.: What’s your pick for the most slept-on Senate race, and why people should be paying attention to it?

Josh: Well, of course, don’t sleep on Alaska (disclaimer: I am an intern for Dr. Al Gross’ campaign). Polls won’t close in the Great White North until 1 a.m. EST, but Dr. Al’s race versus incumbent Sen. Dan Sullivan will be an interesting race to watch. Aside from that, I think Jon Ossoff in Georgia has a real fighting chance against David Perdue. I know, I know, the figures as they currently stand look bad for Democrats in the state, but the largely liberal counties surrounding Atlanta still have loads of votes waiting to be counted. I might be a bit overoptimistic, but my gut tells me that we’re looking at a very tight race in the Peach State.

Maya: Definitely Montana’s Senate race of incumbent Republican Sen. Steve Daines versus Democratic Gov. Steve Bullock. They’re both named Steve, and they both have tons of name recognition in Montana. Think about how EASY it would be to accidentally vote for the wrong Steve on your ballot. This one could go either way, but I just know there’s some disappointed Montanans who mistakenly bubbled in the wrong Steve. Yikes.
10:52 p.m.: Vibe check. How are you feeling as you’re looking at maps, needles, Twitter, etc.?

Josh: Wow, I really need a drink. Nonstop refreshing The New York Times, FiveThirtyEight, and my Twitter feed has been doing absolute ~wonders~ for my election anxiety. I’ve come to realize: I used to love watching John King tap-tap on the big map, but I’m pretty sure that it’s going to be the death of me. Also, is it possible that The New York Times needles are specifically designed to make me sweat? Anyways, I had a sinking feeling that Florida was going to Trump, and it looks like that’s going to end up coming to fruition. I’m trying to stay optimistic about North Carolina, Georgia and Texas, but things aren’t looking great for Biden right now. The Biden landslide that many of us were half-expecting looks to be more and more out of reach every minute.

Malcolm: The vibes are anxious, eerie, and confused. Nate Silver keeps coming on ABC to tell me that it is still too close to call. I felt fairly confident in Biden going into tonight, but I’m becoming more and more nervous sure as each hour passes. People really do this every four years?

9:36 p.m.: There were two ballot questions from the state of Maryland, one on the General Assembly’s ability to change the state budget and the other to legalize sports betting. Any thoughts on those?
Josh: Though I didn’t get to vote on the Maryland measures (I’m from Georgia), I do have a few thoughts on them. Back in September, I explained my views on Maryland’s Question 2. To summarize my take: Even though it’s immoral for the government to profit off of an addiction like gambling, it has already been legalized in some states that surround Maryland (including Pennsylvania, Delaware and West Virginia). So, Maryland might as well legalize sports betting in order to prevent money from being funneled into a) other states or b) the black market.
Maya: I’m going to be very honest with you: I only remember voting for the sports betting question. This was the only question that was worded in plain English. I felt like the way the state budget question was phrased was so confusing, and I voted ‘yes’ based on my convoluted understanding of the question. Even worse, my home county had two questions on the ballot about redistricting within the county and city council seats. These two questions made no sense to me, and I really think I voted randomly on both of them. When elected officials write these referendum questions, they need to include language that regular, everyday Marylanders can understand. It’s ridiculous and an impediment to representative democracy to code these questions in confusing language and poor sentence structure, and it’s what (at this point in the evening) I was most disappointed by on the Maryland ballot.
Malcolm: I agree with Maya; the way the question on sports betting was worded was extremely confusing and speaks to a more general problem with how accessible ballots and their language are. I voted ‘no’ on it for two reasons. One, I don’t have a lot of faith that the taxes from sports betting will go directly to education. States tend to say that lottery revenue is for “education,” but it ends up in less productive places. Two, even if it is going to education, here are better, more direct ways to equitably fund education in the state.

8:41 p.m.: We’re starting to see polls close and results come in from combinations of mail-in, early and Election Day voting across the country. Of course, we won’t know the final official vote tallies for a while. What was your voting process like? Do you think your state or county could have done anything better to make for a smoother, simpler process?

Maya: I had a relatively easy voting process, and I’m lucky that was the case. I’m from Montgomery County, but I live in College Park. I originally requested an absentee ballot because I didn’t know if it would be safe to vote at home due to COVID-19. In Maryland, you can have the state send you your ballot or you can print it out at home (which apparently is a novelty, according to the shocked faces of my friends from other states). I printed my ballot out, but I was worried it wouldn’t be counted correctly, so I went home last weekend to vote in person just in case and get my sticker. I was in and out of the voting center within 20 minutes. It was an immense privilege for me to be able to go home and vote with ease, but I’m so happy I was able to cast my vote in person.

Serena: Like Maya, I live in Montgomery County. I had to request my absentee ballot, which was a frankly unnecessary step in the whole process. I’m not sure why the state didn’t just send it to everyone and make it simpler. I filled it out, my parents dropped it at a drop box not too far from our house (I had to stay home and “be an opinion editor”), I got the emails saying it was first received then accepted. It could have been simpler, but overall I’m pretty happy with my experience.

8:00 p.m.: College students were predicted to turn out in droves for this election. Why do you think that is?

Josh: The increased student turnout during this election cycle has been primarily driven by the prominent (largely youth-led) coalitions that have swelled over the course of the past several months. Black Lives Matter (possibly the largest movement in U.S. history) brought countless individuals into the political arena; additionally, the federal government’s violent, asymmetrical approach to dealing with activists has led many young people (who may have stayed home otherwise) to hold their nose and vote for Biden. This handy little graphic from the Sunrise Movement (a group that has had enormous success with youth engagement) shows that 63 percent of young voters “will definitely be voting,” as opposed to 47 percent in 2016 — an increase of 16 percentage points in four years! It looks like the “political revolution” could really be coming to fruition.

Malcolm: College students and young people in general haven’t gotten a lot of credit for being an essential voting block for the Democratic party, not only right now but for the foreseeable future. I think it’s clear the reason college students are expected to come through this cycle is because so many contentious issues are going to directly impact us. College tuition prices, reproductive access and a whole climate crisis is on the ballot. It would make sense that an energized and educated population would show up.

Maya: This election will have incredible ramifications for young people, no matter which way it goes. I think college students, and young people as a whole, are tired of not having a voice in the political decisions that impact them the most. Additionally, in each election cycle, “low youth voter turnout” is insultingly hurled at college students and young voters by political pundits. I truly believe that with this election, college students understand that the outcome will have direct impacts on their lives and their futures. They won’t stand idly by. With a whole host of issues, including climate change, women’s rights and racial justice, college students have recognized that the time to make their voices heard is now.

Serena Saunders, opinion editor, is a public policy graduate student. She can be reached at serena@sersaun.com. 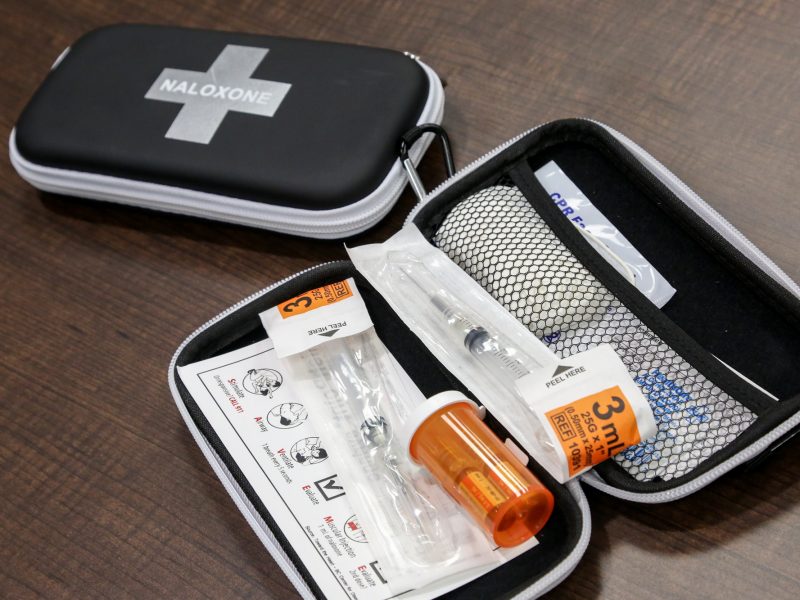