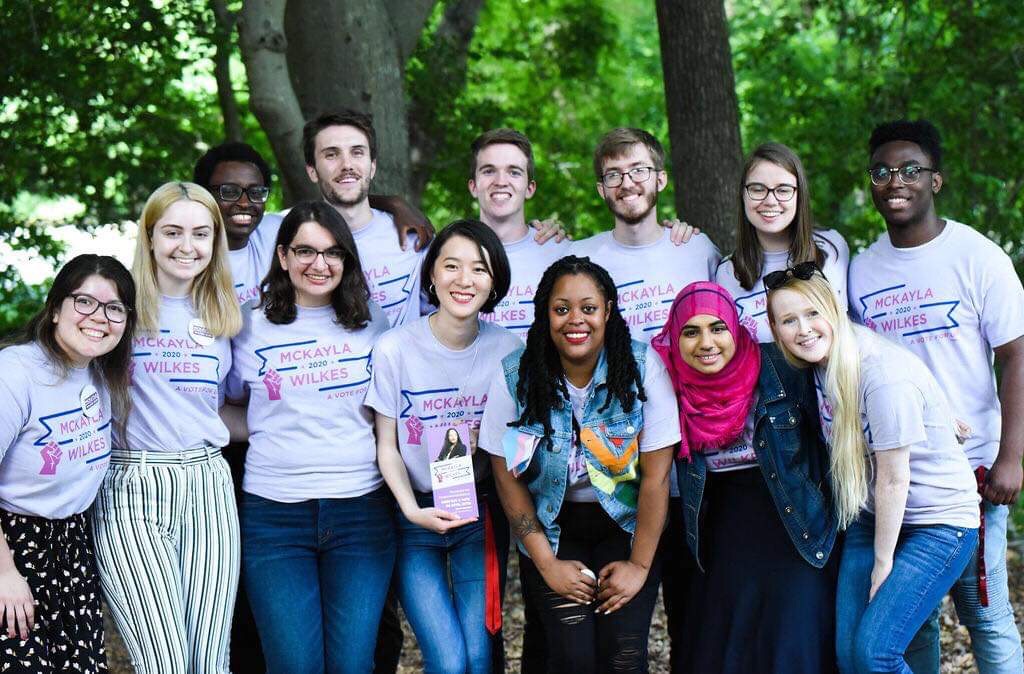 In January, Mckayla Wilkes sat by her computer at work, discouraged and upset.

While counting how many credits she needed to graduate from Northern Virginia Community College, the 29-year-old single mother — who had dreamed for years of getting her master’s degree in law and becoming a congresswoman — had just realized that she didn’t have enough money to cover all her classes without financial aid.

In the midst of her discouragement, Wilkes thought about all of the new, young progressives in office who were women of color — like Alexandria Ocasio-Cortez of New York and Ayanna Pressley of Massachusetts, both members of the House of Representatives.

“I finally saw people in Congress that look like me,” she said. “I thought, if they can do it, I can do it too. And it empowered me.”

So she searched the words that would change everything: “How to run for Congress.” Now, about eight months later, Wilkes is running a campaign managed by University of Maryland students — competing as the youngest candidate against incumbent Steny Hoyer, who has held the seat for almost 40 years. Briana Urbina, a civil rights lawyer, is also contesting the post.

And with twelve students from the University of Maryland making up a third of her campaign team, she has the most student volunteers from this university out of either of the other candidates.

“Having college students run this campaign is what it’s all about,” Wilkes said. “Young people are often left out of the conversation.”

Hiring such young staffers wasn’t always Wilkes’ plan. Originally, she planned to do everything on her own. But in March, she received a call from Dash Yeatts-Lonske, a junior at this university.

Yeatts-Lonske was studying abroad in Berlin, taking a class on political responses to climate change, when he realized he wanted to get involved with a candidate running against Hoyer. After a quick search online, he found out Wilkes had filed as a candidate, messaged her on Facebook and set up a phone call.

Born in Washington, D.C., and raised in Waldorf, Maryland, Wilkes spent time in juvenile detention centers as a teenager and witnessed abuse from facilitators. She’s been arrested for marijuana and had her license suspended for unpaid parking tickets — all things she’s been open about during her campaigning.

It wasn’t long before Yeatts-Lonske and three of his friends, who were also frustrated with Hoyer, were working side by side with Wilkes. Now all rising seniors, Yeatts-Lonske is the campaign manager, marketing and information systems major Vivien Zhu helps with communications, and mechanical engineering major Anders Alilio and government and politics major Max Foley-Keene conduct policy research (Foley-Keene is also a columnist for The Diamondback).

Wilkes said she’s become very close with the students. While in College Park, they all went out to places on Route 1 such as Chipotle, Starbucks and the Board and Brew.

“It’s kind of almost like a big family — we all work together and the dynamics are amazing,” she said.

Yeatts-Lonske said he considers Wilkes a friend and finds it easy to talk to her, something that’s “definitely not been true at any of the previous campaign” he’s worked on.

Wilkes’ goals include expanding the Green New Deal to include coastal cities, creating a universal monthly child support allowance for families, implementing an automatic voter registration system and abolishing ICE, according to her website.

Both Yeatts-Lonske and Alilio said that, though they heavily identify with her policies, it’s her authenticity and easygoing nature that will help her relate to voters, which they feel is a big advantage over Hoyer.

“She’s just someone that’s really easy to relate to — it’s a little bit harder to relate to someone who’s been doing the job for 40 years,” Alilio said. “She has that energy and enthusiasm because I think she has more of a grasp of the urgency of the problems of our time.”

Annaliese Davis, a spokesperson from Hoyer’s campaign, said his years of experience in government “make him uniquely able to serve his constituents, including the students at UMD.”

“He will continue to work hard to earn their votes,” she said.

Wilkes continues to be surprised by the dedication of her team, she said. In the fall, the students will be launching a Terps for Mckayla organization on the campus.

“[It is] great to see a group of young students be a part of politics,” Wilkes said of her team.