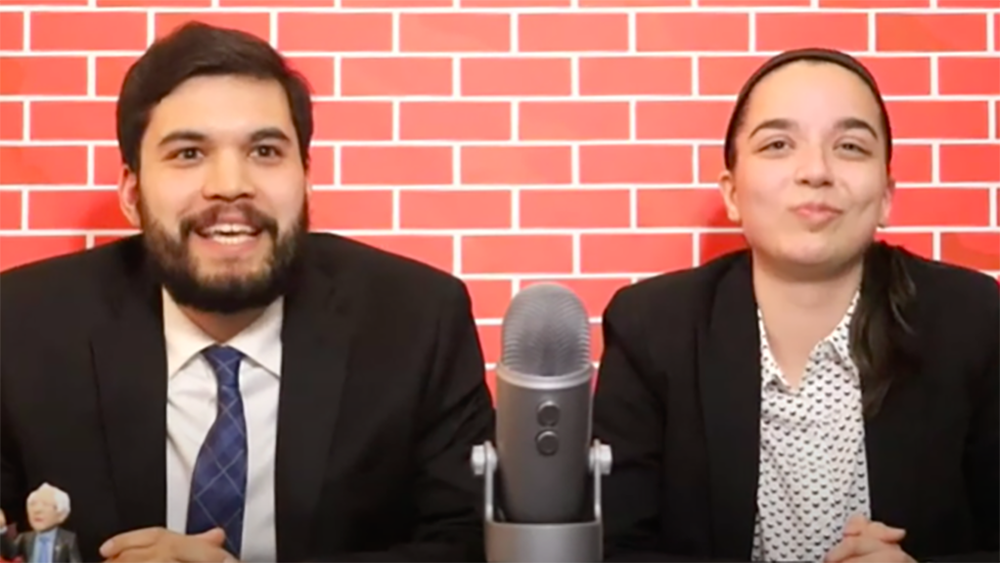 Maryland Tonight was as subversive and hilarious as any Maryland Night Live show. Through occasional lag and desynchronization, the cast and crew delivered a number of live-action pieces and prerecorded sketches Friday that were as funny as they were challenging and politically relevant. According to the minds behind the program, that’s exactly what they hoped for.

To be clear: Maryland Tonight is not Maryland Night Live. The latter has a longer production period and a larger crew on call for sketches, production and live performances; the former was produced inside a University View apartment with a small group of collaborators who made sure all material was written, produced and put to camera no more than four weeks in advance.

The idea came from a few members of MNL season 5 who wanted to do a different type of show than strictly sketch comedy. It wasn’t easy, especially when safety measures precluded in-person idea sharing.

“We do a lot of Zoom meetings,” writer Justine Morris, a junior theatre major, said. “Sometimes it’s difficult when you’re putting a show together online, and it doesn’t feel like everyone’s in the same room.”

But that separation forced the writers to get more creative.

“We have limits for what we can do,” Niswander’s co-host Walker Green said. “It helps make the brainstorming a lot more fun … like ‘How can we make a Hamilton duel happen?’ Well, there’s this labyrinth by the Chapel which feels like a duel scenario, so it’s like, ‘Let’s do that!’”

Remote segments were one of the noticeable benefits that came with the freedom of pre-recording bits. It wasn’t their first time testing out the virtual waters — Maryland Night Live season 5 was exclusively live streamed instead of performed for a live audience for the first time in the show’s history. The production’s success laid the groundwork for what would eventually become Maryland Tonight.

“[MNL season 5] really showed that we can do a virtual show successfully.” said Green, a senior government and politics major. “So it was like, ‘If we’re already streaming online, and there’s an audience of people who watch online, why not just take it a step further and just set up cameras and just do it as if it was a talk show?’”

Maryland Tonight is meant to be similar to late-night shows whose hosts — predominantly white men with the last names Colbert, Fallon and O’Brien — goof on the latest political topics and headlines. As such, the show mainly focused its sketches on the current political landscape. That included a mix of live and pre-recorded bits that lampooned everything from Hamilton to local election commercials and even Hunter Biden’s admitted prior history with drug use. The sketch that featured that joke, a parody commercial that paired Arby’s sandwiches with Joe Biden, showed the writers weren’t afraid to get real or bipartisan in their satire.

The non-political segments were varied, alternating between pointed critique and downright goofiness. Whereas musical guest Benny Roman’s Beatles parody “Let Me In” conveyed every student’s frustrations while logging on to their Zoom classes, “What’s on Rachel’s Headband” was about as close to Mitch Hedberg’s brand of absurdist non-sequitur humor as you could get, complete with some self-referential humor. Roman’s later performances of his original song “Penelope,” as well as the junior government and politics and philosophy major’s take on Cat Stevens’ “The First Cut is the Deepest,” were a welcomed respite from the comedic onslaught of the prior 50 minutes.

The two highlights, however, were a pair of pre-recorded segments that played off the reactions of real man-on-the-street interviews, whether on Route 1 or Rockville Pike right outside Walter Reed National Military Medical Center.

The first was senior Jewish correspondent Jayson Borenstein’s where he asked random University of Maryland students about Jewish culture. One person thought Fran Drescher was Janice from Friends, which made me laugh out loud. Another person’s mistaking of Mel Brooks for Mel Gibson was a gimme for a sweet Gibson anti-Semitic burn from Borenstein.

The second was senior political correspondent Bardia Memar’s trip to Walter Reed to interview Trump supporters who flocked to the hospital after President Trump’s COVID-19 diagnosis. When Memar’s narration stated that he felt “mentally socially distanced,” it wasn’t hard to see why. Come for the Abe Lincoln cosplayer who claims America has always been a divided nation, stay for Memar’s unlikely photo-op with the leader of the free world.

This isn’t to say the show went off without a hitch. Many of the live segments were marred by desynchronization of the audio and visuals.

[What do UMD students miss most about campus life before the pandemic?]

“We were wired directly into the wall with an ethernet cord,” said stage manager Lee Brady, a junior sociology major. “If we’re going past the bandwidth that our apartment’s internet connection allows, there’s not a lot we can do about that.”

Still, all technical hurdles aside, the show was remarkably well-timed, segueing between pieces with ease and keeping to its one-hour runtime.

“There were a couple of hiccups along the way.” Niswander said. “But I’m pretty proud of what we were able to produce.”

What the performers will do next isn’t yet finalized. There are thoughts that a Maryland Night Live season 6 is on the horizon, possibly due out by February. Other potential future plans include a Maryland Tonight Hanukkah special with Borenstein — and if the special is as funny as Borenstein’s “Goy Ve” segment, there’s no complaining here.