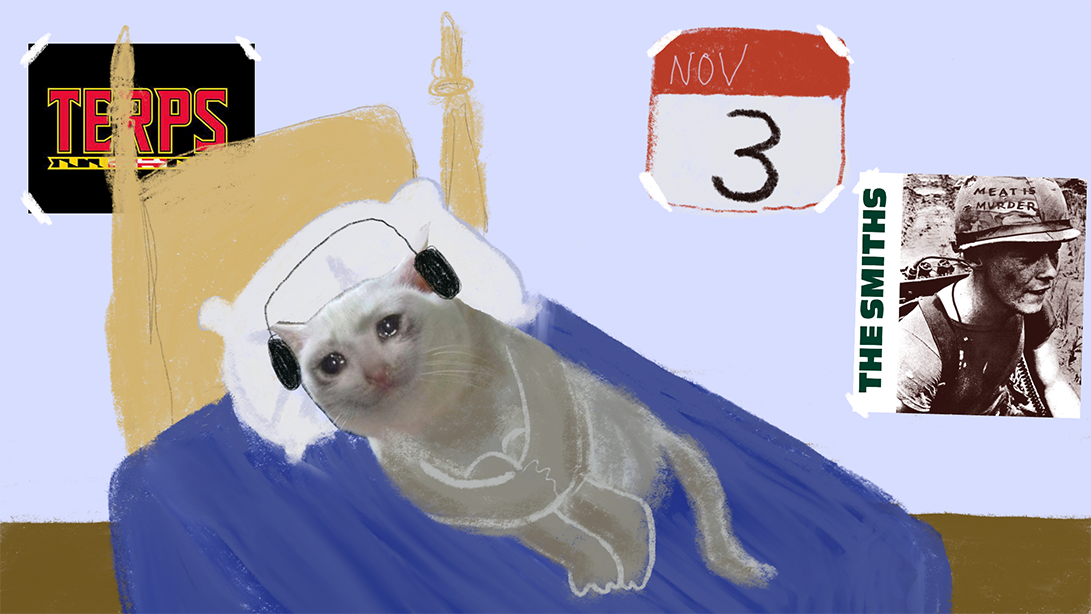 As a whole, this election season has been one blood-boiling and stomach-churning ride with plenty of moments that seem straight out of a fever dream. The inaugural 2020 presidential debate showcased an unbearable hour and a half of vapid taunting and even captured a bit of reality television entertainment when Democratic nominee Joe Biden — in a moment of heat — snapped at President Donald Trump on the stands. CNN’s Dana Bash later labeled the debate “a shitshow,” and in all honesty, that pretty much sums up how every debate — and everything related to the election — has progressed.

In honor of next Tuesday’s grand Election Day, here’s a playlist that captures this election season’s fiery mess and also offers a bit of calm before the next (possible) storm. Whether you’re trying to spike up your adrenaline or calm down those nerves before Election Day, this playlist has got you covered:

“I Know the End” by Phoebe Bridgers

“Windows down, scream along/ To some America First rap country song”

The last tune off of Bridgers’ most recent album, Punisher, this song conveys a sense of madness that feels particularly American. Play it at the end of a punishing run on an uncharacteristically hot fall day (because global warming) and try not to break into a sprint. Bridgers has said that one of the main themes running through Punisher is that of personal crisis intersecting with global crisis. It all coalesces on “I Know the End,” which closes with a massive, collective, throaty scream by Bridgers and her bandmates. “I Know the End” may not solve your problems, but it will provide catharsis.

This seven-minute saga is just the calming lullaby we all need. Stevens’ voice feels nurturing, especially backed with collaborator Elin Smith singing, “Rest in my arms/ Sleep in my bed/ There’s a design/ To what I did and said.” The acoustic guitar and horns add to the song’s warm feel, telling us it’s all going to be OK. And while it might not be true, it’s nice to think so.

“Turtleneck” by The National

“Just another man, in shitty suits, everybody’s cheering for/ This must be the genius we’ve been waiting years for”

The National is no stranger to the election song genre, releasing “Mr. November” after the 2004 election and penning the score to one of Obama’s national campaign ads in 2008, “Fake Empire.” This track was, according to lead singer Matt Berninger, a “visceral reaction” to Trump winning in 2016. But the sardonic line “This must be the genius we’ve been waiting years for” feels almost interchangeable with this election, with three and a half years of intense anger, indignance, dysfunction and polarization building up — or perhaps, falling flat — to an opposing candidate many have elected to just “settle for.”

“This Must Be the Place” by Talking Heads

After an election, all we could want is a safe, calm place to rest our heads. David Byrne knows this feeling well, despite coming off mostly as a cold, distant figure in pop culture. “Home is where I want to be/ but I guess I’m already there/ I feel numb, born with a weak heart/ I guess I must be having fun” is the most romantic, loving, calming lyrics ever written by a man once obsessed with psycho killers, and it’s a feeling we should all take away from whatever happens during this election.

It’s pretty self-explanatory, isn’t it? Someone had to include it. Feel free to contact me if you feel like this is an inappropriate choice.

[The new Wallows EP provides a much-needed dose of sunshine]

“Start a Riot” by Duckwrth, Shaboozey

Sure, Trump’s Supreme Court justice pick, Amy Coney Barrett, was recently sworn in — exactly a week before Election Day. But remember when Barrett was unable to name the five freedoms protected under the First Amendment during her confirmation hearing? “Speech, religion, press, assembly … I don’t know — what am I missing?” she asked. Well, maybe Duckwrth and Shaboozey’s tune can help Barrett remember, and never forget, what the last freedom is. Perhaps next time, Barrett will be able to answer such a simple question confidently — considering it’s also a question asked on the U.S. Naturalization Test.

With Barrett having been sworn in, the conversation surrounding LGBTQ rights and women’s rights up in the air, rampant racism and two middle-aged white men competing to run the country, we might not have to “play 1950” for much longer because we’ll be living in it. This song can be nice and relaxing after a stressful day of thinking about the country’s imminent doom, but the now eerie comparison to 1950 just doesn’t sit right. Sorry King Princess, instead of manifesting love and relationships, this song manifested the actual year.

“I’m So Tired” by Fugazi