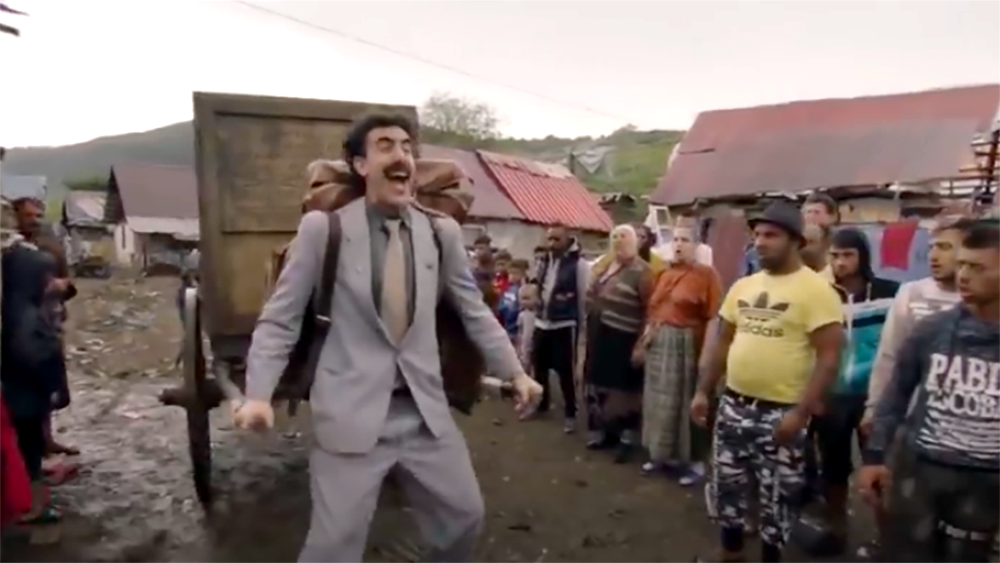 By Molly Zatman
For The Diamondback

Fourteen years after the release of the original Borat movie, Sacha Baron Cohen has once again taken on the titular role of the Kazakh journalist for a sequel.

Borat Subsequent Moviefilm follows Baron Cohen’s character as he tries to bring glory back to his country by gifting his daughter, Tutar (Maria Bakalova) to an American politician.

Through the vulgar humor and fast-paced plotting, Borat gets pulled into a series of embarrassing and offensive situations.

Like its predecessor, the film is a mockumentary, weaving together scripted scenes with the real-life shenanigans Baron Cohen performed in public with unknowing civilians.

Although this combination feels much more forced than the first movie, it still feels jarring as the lines between satire and reality are quickly blurred. Baron Cohen seems to ask an important question: In a year as crazy as 2020, is satire really ridiculous anymore?

[The new Wallows EP provides a much-needed dose of sunshine]

On one hand, the increasingly exaggerated means through which Baron Cohen pulls stunts are reminiscent of The Onion and fantasy books. However, he approaches topics such as COVID-19, Donald Trump’s presidency and expectations of femininity with an underlying heavy hand.

The movie is outward and unflinching in its mockery of the current American political climate.

As gaudy as it is fearless, the film tries to shock its audience again and again. Baron Cohen offers no apology or shame for the film’s vulgarity, and he refuses to be anything less than heard, even — and especially — at the cost of embarrassment.

In one scene, the audience gets a grotesque visual of Borat’s daughter menstruating, and phallic imagery is littered throughout the movie.

The film holds an advantage over the original movie with its star-studded appearances, including famous politicians such as Rudy Giuliani, former mayor of New York City and a close ally of Trump.

[It’s Miley Cyrus’ world, and we’re all just living in it]

Despite not having played the character for cameras in over a decade, Baron Cohen’s Borat has not missed a beat. Borat is the same uncouth, messy persona any veteran of the franchise can recognize.

But the unexpected star of the film is Bakalova, a relatively unknown Bulgarian actress who plays Borat’s 15-year-old daughter.

Bakalova’s performance is shockingly genuine. She capitalizes on a distinct relatableness and doe-eyed innocence as her somewhat perverted character is tossed into different situations. Her distinct fierceness and charisma pairs well with Baron Cohen’s gruff character.

The film works well by itself, despite the fact that the original movie had shock value that just could not be replicated. Nonetheless, the movie possesses its own strengths.

Borat Subsequent Moviefilm is best described as a combination of Seth Rogan’s The Interview mixed with a successful YouTube vlogger’s prank videos. A unique mixture of crass humor, underlying commentary and occasional heartfelt moments string together this bound-for-success movie.