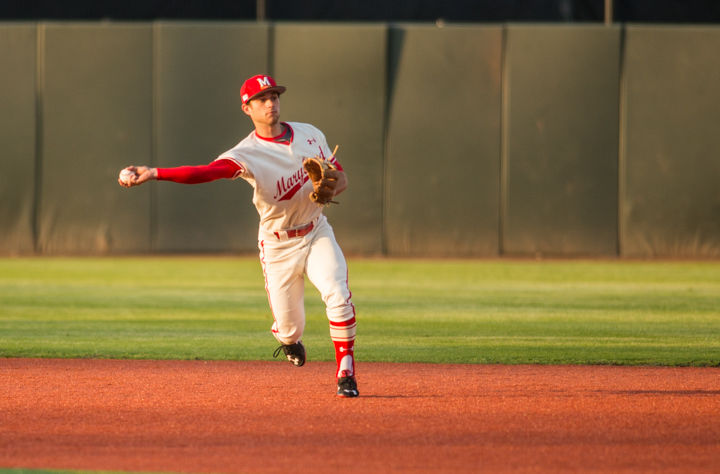 Second baseman Brandon Lowe throws out a player at first base during the Terps' 3-1 loss to VCU at Bob "Turtle" Smith Stadium on April 22.

It was bound to happen at some point in this World Series; Dodgers’ lefty-specialist Adam Kolarek was deployed late in Game 4 Saturday night to take on the potent bat of Rays’ star Brandon Lowe.

The eighth-inning match-up was Kolarek’s first appearance of the series, and it was the first time in history that two former Maryland Terrapins faced each other in the World Series.

With the Dodgers holding a 7-6 lead in the eighth, Lowe came up to bat against his fellow Terp after previously crushing a go-ahead home run in his last at-bat to give the Rays their temporary 5-4 lead in the sixth inning. This time, Lowe had another opportunity to put the Rays ahead as Kolarek had walked Ji-Man Choi just two batters prior to Lowe.

However, Kolarek won the first of potentially a few battles between the two Maryland alumni as he struck out Lowe swinging, neutralizing a huge threat to LA’s late lead.

TERP VS. TERP IN THE WORLD SERIES 🐢

Kolarek strikes out Lowe in the first AB between Terps in #WorldSeries history!#ProTerps pic.twitter.com/RBmvhAiNmD

With the Rays pulling off one of the wildest walk-off victories in recent World Series memory — evening the series at 2-2 — it appears that more Kolarek-Lowe matchups could be likely in the remainder of this year’s Fall Classic.