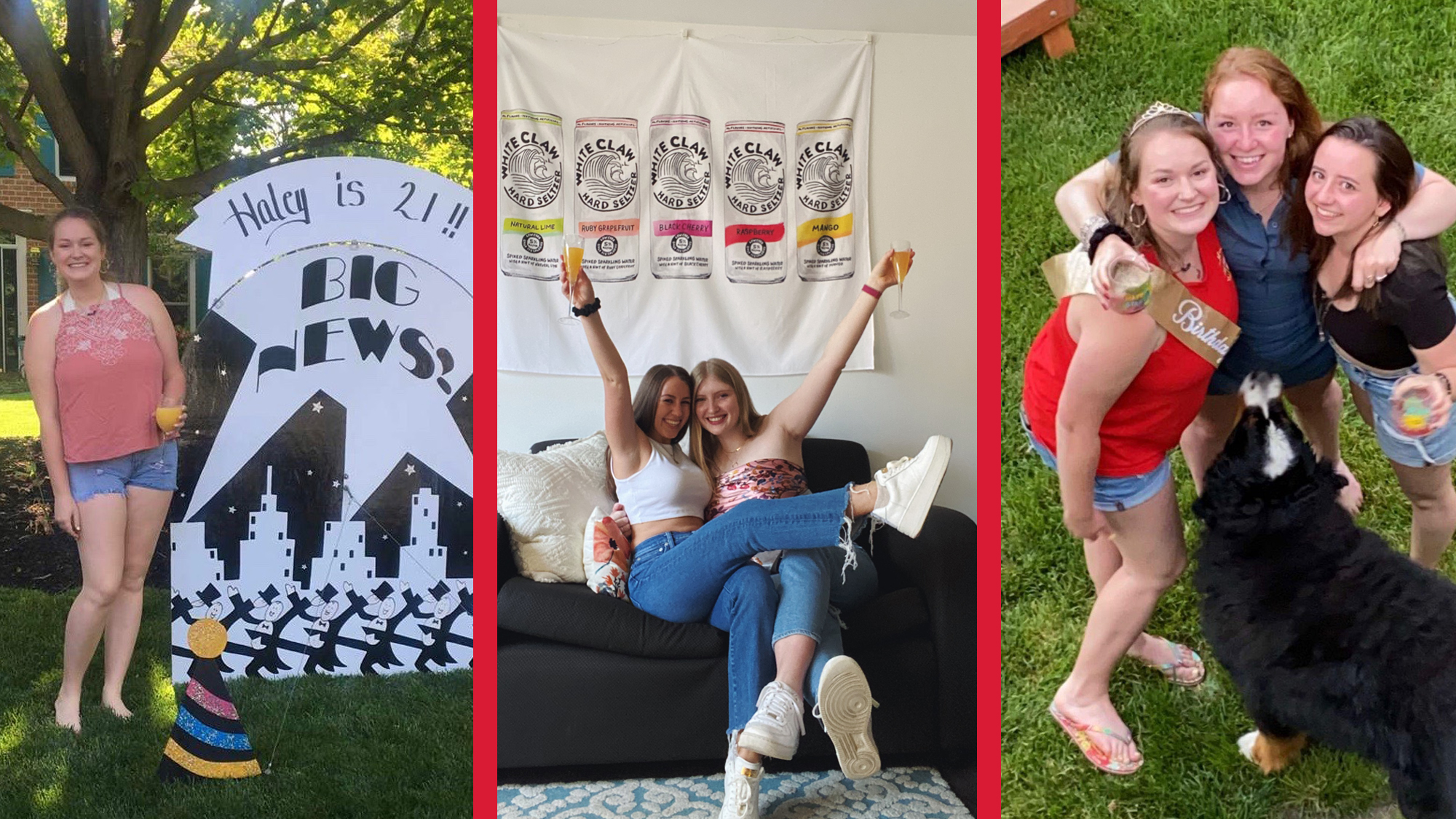 Amid the coronavirus pandemic, students have had to find alternatives to the traditional ways of celebrating their 21st birthdays. (Photos courtesy of Laine Napoli, Graphic by Julia Nikhinson/The Diamondback)

By Laine Napoli
For The Diamondback

The saying “all dressed up and nowhere to go” takes on a new meaning when turning 21 during a global pandemic. This rite of passage is often fantasized about by college students as they look forward to their next step to adulthood.

But those turning 21 this year are looking at a birthday they can’t fully celebrate, due to social distancing and health precautions amid the ongoing pandemic.

Eva Minahan, a senior psychology major at the University of Maryland, said one of her roommates tested positive for COVID-19 just days before her 21st birthday in September, which ended her plans to celebrate around College Park.

Although it wasn’t what she had planned for, Minahan celebrated by having a quarantined brunch with her roommates that hadn’t tested positive, supplied by her mom, who dropped off birthday treats outside her apartment in order to stay distanced.

Complete with balloons, flowers and plenty of small bottles of liquor, Minahan was able to have a day to remember — or maybe not so much.

[A UMD student wanted people to embrace their majors, so he turned to digital art]

“I really appreciate my roommates who were [COVID] negative still making sure I had fun despite us being stuck inside,” Minahan said.

But the pandemic has altered birthday plans for more than just Minahan.

Senior psychology major Haley Zawitoski, who turned 21 last May, said she saw herself exploring bars in Washington, D.C., for her big day. Instead, she enjoyed a hike and picnic with her roommates and was later surprised with an outdoor get-together with a small group of her friends.

“After all that happened when everything started to go down, I accepted that it’s not gonna be what I wanted,” Zawitoski said of planning for her birthday during the pandemic. “But at that point I felt like I had already lost like a lot of time and expectations for how things were supposed to be.”

Even though she enjoyed her 21st birthday, Zawitoski said she thinks that 22 should be the new 21 so she can celebrate in the way she had hoped.

“There are loose plans to celebrate when 22 comes around, but for the most part, I’m just kind of taking every day as it is,” Zawitoski said. “I’ve learned to just not make concrete plans because we don’t know what’s gonna happen next week.”

Fiona Franke, a junior physiology and neurobiology major at this university, also celebrated her 21st birthday recently, with her special day falling on Oct. 6.

Franke had originally planned on celebrating at a classic University of Maryland football tailgate and a trip to a College Park bar. Instead, she celebrated by buying alcohol from a liquor store for the first time and spending time with her roommates at an at-home brunch.

But her birthday being over doesn’t mean the party has to end, she said.

“Once you turn 21 … there’s still going to be firsts,” Franke said. “I feel like this whole year can be a celebration.”