A UMD student wanted people to embrace their majors, so he turned to digital art 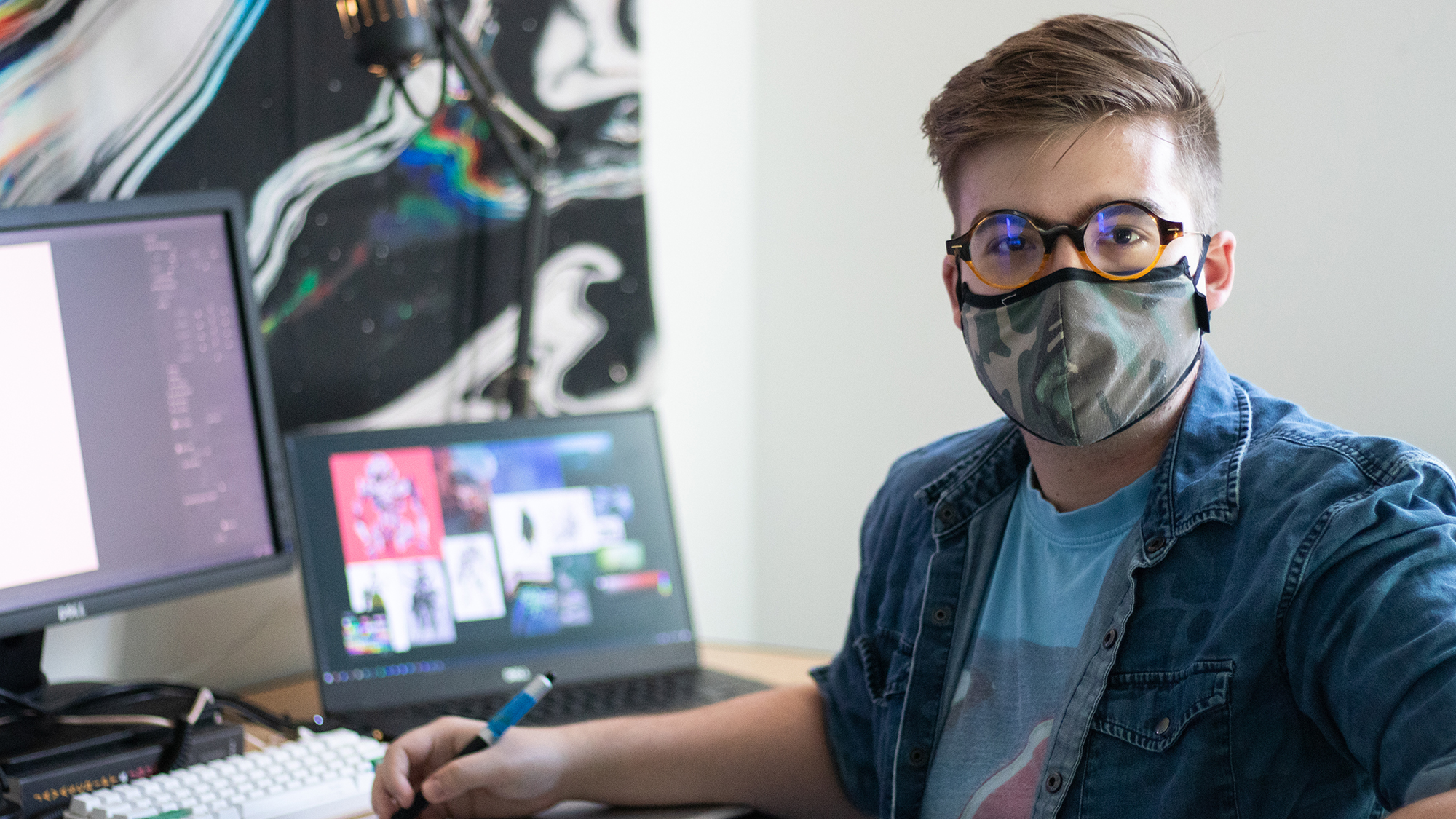 Berkeley Poulsen at his workstation on Oct. 6, 2020. (Julia Nikhinson/The Diamondback)

When Berkeley Poulsen first stepped foot on the University of Maryland’s campus over three years ago, he knew he wanted to study something related to design.

He decided to major in information science, but he was worried about what his future might hold and whether he’d be able to follow his passion for digital art. He even contemplated changing his major to computer science.

“It was just kind of like a rough patch,” Poulsen said.

Poulsen knows from experience that choosing a major is difficult. It wasn’t until the spring semester of his junior year that he decided to take on a psychology major. Now a senior, Poulsen is an information science and psychology major. Psychology piqued his interest as a way to help others, and information science provided a compelling intersection between technology and design.

And now he’s trying to help others struggling with their majors embrace their passions and individuality.

This was the start of Project Fearless, a collection of digital personifications of majors at this university with the goal of motivating students to stick with what they love and to feel confident in their majors, Poulsen said.

Soon, students of different majors wanted to see what he could come up with. Then, after weeks of designing new characters, he released the first season of his project — featuring majors such as astronomy, philosophy and history, among others.

“People feel more connected to their major,” he said. “I’ve been getting a lot of different comments and people telling me … ‘This is really cool, thank you for making this character.’”

Poulsen has since opened his own online shop, where he sells stickers representing some of the characters and a poster of the first season. Even though he doesn’t make much of a profit, he doesn’t mind. To him, it’s more about the feelings his art invokes and the messaging behind it.

“A lot of people may switch majors and feel kind of less confident moving forward because they feel like they haven’t been able to match their major,” Poulsen said. “I kind of want people to look at every major as an individual, cool thing to do … I want people to look at them and say ‘Wow, that’s awesome.’”

Before Poulsen started Project Fearless, he served as a support system for his friend, Jummy Adelaja, who also struggled with finding what she wanted to study.

They both originally planned to go to art school but ultimately decided to enroll at this university. As Poulsen navigated his options, he also helped Adelaja look past the fact that the school doesn’t offer an illustration program, eventually helping her put together her portfolio for the graphic design concentration.

“He was very supportive and he helped me feel confident in the work I did,” Adelaja, a senior information science and studio art major, said. “He also taught me that the things I was doing at school and my major weren’t my limits as an artist.”

Poulsen’s roommate, Oscar Saywell, has been at Poulsen’s side since he decided to post his creations online. It was fun to see Poulsen receive the recognition he deserved as his creations gained popularity on Reddit, Saywell said.

On top of Poulsen’s humble attitude, Saywell said Poulsen’s thoughtfulness also plays a significant role in designing his characters — particularly when it comes to race, ethnicity and gender, among other characteristics.

Even though Poulsen told Saywell he doesn’t choose a character’s physical attributes before designing them, Saywell said he does take representation into account. The first group of characters features seven STEM majors, and Saywell said that Poulsen made the majority of them female — a nod to the fact that women and other minorities are sometimes overlooked in STEM.

Still, though, Poulsen wants students to freely identify with the characters without taking their physical attributes or complexions into account. Rather than focusing on a character’s physical appearance, Poulsen focuses more on the character’s expression, outfit and pose so people can see themselves in the art.

When coming up with a new character, Poulsen starts by looking up the required courses online. He then shares his initial sketches or design concepts with his friends or people in the major he’s trying to personify. Once he has a sketch, he paints over it and makes any necessary changes.

Poulsen’s passion for art began at a young age; he remembers grabbing pens and pencils and doodling for hours on end at about five years old. His grandfather, who was also an artist, passed away before Poulsen’s father was born. He left all of his art behind with Poulsen’s family and throughout the years, Poulsen drew inspiration from his late grandfather’s work.

Though Poulsen doesn’t have a concrete plan for his future after graduation, he plans to enter a visual field — whether it’s web development and design or concept design. Project Fearless is his first extensive art project, and he hopes to continue improving and modifying his art style.

“At the end of the day, we’re all striving to get an education,” he said. “The more confidence you have in what you’re doing, the better you end up.”